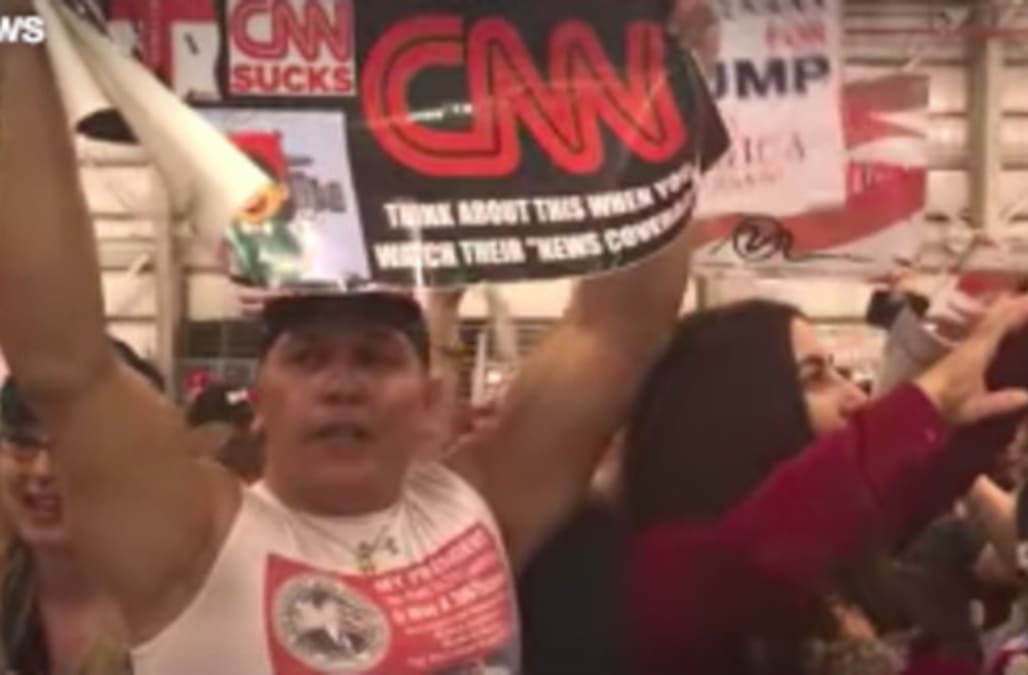 The clip is an outtake from Moore’s current movie “Fahrenheit 11/9.”

It was filmed in Melbourne, Florida, at the first Trump 2020 re-election rally, which was held just a month after Trump’s inauguration in 2017.

Moore said his instructions for the scene were not to film Trump at the rally, but only the people in the crowd.

“My feeling was, after one month in office, we didn’t need to hear anything more from Trump’s mouth — we already knew everything we needed to know about him,” Moore wrote Sunday in a Facebook post accompanying the clip.

“Who we needed to understand were our fellow Americans, lost souls full of anger and possible violence, easily fed a pile of lies so large and toxic that we wondered if there would ever be a chance that we could bring them back from the Dark Side,” he said.

Sayoc, 56, was arrested Friday for allegedly sending more than a dozen pipe bombs in the mail to Democratic political figures and other Trump targets. The van in which he was living was plastered with photos of Trump, pro-Trump slogans, “CNN sucks,” and photos of the faces of Trump critics marked with gunsight crosshairs.

“Needless to say I was a bit shaken to see that Sayoc had placed a photo of me with a crosshairs target over my face on the side of his van,” Moore noted in his post. Moore said law enforcement officials have been watching out for a pipe bomb sent to him but “so far, so good.”

The New York offices of CNN, a frequent target of Trump at rallies, were evacuated last week after a pipe bomb scare linked to Sayoc. CNN president Jeff Zucker said then that Trump and members of his administration “should understand that their words matter.”

Men like Sayoc, Moore said in his post, “have been told by Trump that they are at war ... against the rest of us, the vast, vast majority who believe climate change is real, who state without equivocation that women are equal citizens ... and who demand that all people have a right to easily cast their votes without any interference.”

Today we “grieve over the latest loss of life this weekend in Pittsburgh,” Moore said, referring to the 11 killed by suspected gunman Robert Bowers in an anti-Semitic attack at the Tree of Life synagogue Saturday.

He concluded that the coming “electoral tsunami of voters we are bringing to the polls” on Nov. 6 will “end this madness.”