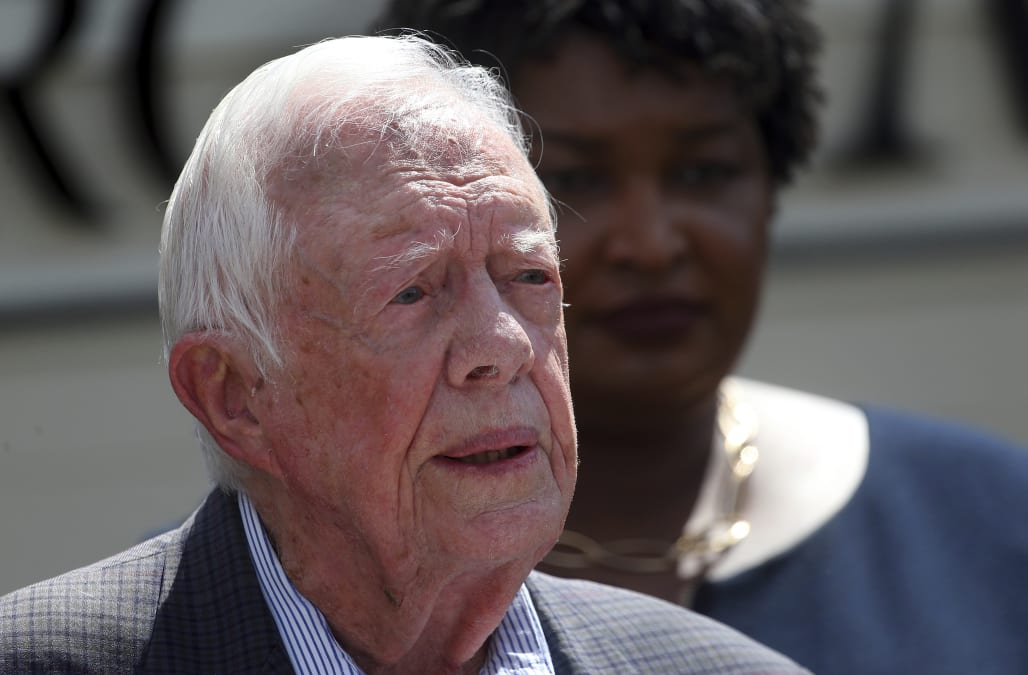 ATLANTA (AP) — Former President Jimmy Carter is wading into the contentious Georgia governor's race with a personal appeal to Republican candidate Brian Kemp: Resign as secretary of state to avoid damaging public confidence in the outcome of his hotly contested matchup with Democrat Stacey Abrams.

Kemp has thus far dismissed Democratic demands that he step aside as Georgia's chief elections officer. But Carter attempted to approach the matter less as a partisan who has endorsed Abrams and more as the former president who's spent the decades since he left the Oval Office monitoring elections around the world.

"One of the key requirements for a fair and trusted process is that there be a nonbiased supervision of the electoral process," Carter wrote, adding that stepping aside "would be a sign that you recognize the importance of this key democratic principle and want to ensure the confidence of our citizens in the outcome."

It was not immediately clear whether Kemp has read the letter or responded. A spokeswoman in Kemp's office, where the letter was addressed, referred questions to Kemp's campaign, which did not immediately respond to a request for comment.

Addressing calls for his resignation during a recent debate with Abrams, Kemp noted that bipartisan panels of local officials run much of the elections process. He also noted that one of his Democratic predecessors ran for governor without resigning, although Cathy Cox failed to win the Democratic nomination in 2006.

Disclosure of Carter's letter comes with Kemp under scrutiny from multiple fronts, chief among them 53,000 voter registrations being held up by Kemp's office. Under the state's strict election laws, mail-in registrations must match exactly a voter's records on file with the Social Security Administration or Georgia's driver's license agency.

Kemp insists he's fairly applying Georgia law and that those would-be voters can cast ballots if they present acceptable identification — like any other Georgia voter — that clears up any questions. But Abrams and voting rights advocates have assailed the move — and sued — as part of a pattern Democrats say is intended to make it harder for minorities and other Democratic constituencies to vote.

Republicans have returned fire, with Kemp alleging that Abrams and her backers want to give ballots to immigrants who are in the country illegally. That attack also is featured in a Republican ad being broadcast statewide.

Carter sidestepped that back-and-forth in his letter, mentioning only "the undeniable racial discrimination of the past" and a federal court's recent criticism of the touchscreen voting machines used in some Georgia counties.

U.S. District Judge Amy Totenberg in September cited "a mounting tide of evidence of the inadequacy and security risks" involved in Georgia's system. She agreed with voting integrity advocates who sued last year and argued that the touchscreen voting machines Georgia has used since 2002 are vulnerable to hacking and provide no way to confirm that votes have been recorded correctly because there's no paper trail.

But she sided with Kemp in denying the advocates' request to force the statewide use of paper ballots for the 2018 midterms. Kemp, who has been secretary of state since 2010, has recently joined calls to move to paper ballots but said it would have caused too much upheaval to make the change this year.