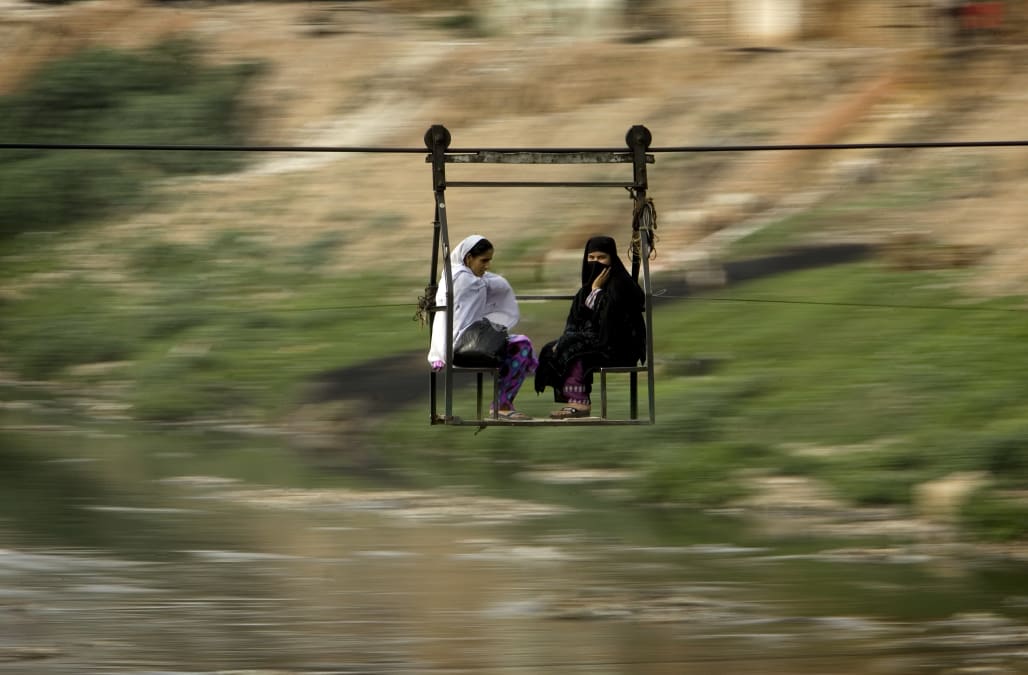 The average commuter usually rides in a bus, train, or car, but for some commuters around the world, swimming or zip lining to work is just as normal.

For some of the most populated cities in the world, a morning commute during rush hour brings streets to a standstill and turns public transportation into a nightmare.

In Mumbai, India, more than 7.2 million workers commute using the Mumbai transit system daily, which makes almost 3,000 trips per day. A village in Sichuan, China, has school children scale a giant steel ladder up an 800-meter, or 2,624-foot, mountain to get to class.

Extreme weather can alter daily commutes, too. A commuter in New York City skied to work after a snowstorm hit the streets. Flooded streets in Asuncion, Paraguay, prompts commuters to use horse-drawn wagons to travel.

Check out some alternative ways workers are commuting to the office around the world.

Some of the wildest commutes in the world

If the snow is too much for New York City commuters, skiing is always an alternative option to get to work.

Snow is ubiquitous in Alaska, where several remote villages require locals to travel by dog sled.

People use reindeer sleds in the Western Siberian region of Russia.

During the warmer months, Hoboken, New Jersey, resident Zach Schwitzky kayaks across the Hudson River into Manhattan daily for work. It takes him 20 minutes to cross the river but his commute is 45 minutes door to door.

Earlier this year, Scott Holt went viral for paddle boarding across the Hudson River because he was late for a work meeting. The Jersey City resident decided to forgo public transit and made it to work in 30 minutes — just on time for his meeting.

For over 17 years, Gabe Horchler has rowed five miles to the Library of Congress for work, down the Anacostia river from Maryland to Washington, DC.

Benjamin David, a commuter in Munich, Germany, swims upstream to work. "Sometimes I hear commuters yelling at each other up on the riverbank while I'm having fun watching ducklings and squirrels," he wrote in an article for The Guardian.

(Photo by Matej Divizna/Getty Images)
In Georgia, cable cars in Chiatura take people to and from work, hovering hundreds of feet above the ground.

(AP Photo/Evgeniy Maloletka)
The cable cars in Pakistan are more like glorified chairs on rope.

(AP Photo/Emilio Morenatti)
Commuters in Bolivia use the world's highest cable car system that transports thousands of people about 4,000 meters, or more than 13,000 feet, above sea level.

(AP Photo/Juan Karita)
Cable cars are also a common mode of transportation for workers in Brazil.

And that's an improvement from the vine and wooden ladders that were replaced in 2016.

In Venice, Italy, commuters use water taxis to get to school, work, and home from any of the 14 taxis stations around the city. A water taxi can hold up to 10 people at a time depending on size.

(AP Photo/Luca Bruno)
People in Bangladesh commute in boats similar to canoes — even in the rain.

(AP Photo/ Saurabh Das)
The trains in Bangladesh are some of the most crowded for commuters, many of whom risk riding on the roof or hang onto the sides.

(AP Photo/A.M. Ahad)
Commuters also hold onto the side of trains in Soweto, South Africa.

Several commuters in China choose to bike to work alongside other cycling commuters, making for an epic traffic jam.

North Korean commuters can be easily spotted in their suits on bikes.

Meanwhile, some commuters in Bangladesh pay others to bike them around.

(AP Photo/Dieu Nalio Chery)
Taiwanese commuters use motor scooters, too. There are 15.09 million motorcycles in Taiwan, or 67.6 for every 100 people.

(AP Photo/Wally Santana)
Meanwhile, tobacco farmers in Cuba pile on to a truck bed to head to work.

Trams are a popular mode of transportation for North Korean commuters.

Trams are also used in Turkey, traveling through the middle of crowded streets.

For commuters in Bangalore, India, rush hour brings the streets to a standstill.

SEE ALSO: Staggering photos show what daily life in the most crowded cities in the world is really like