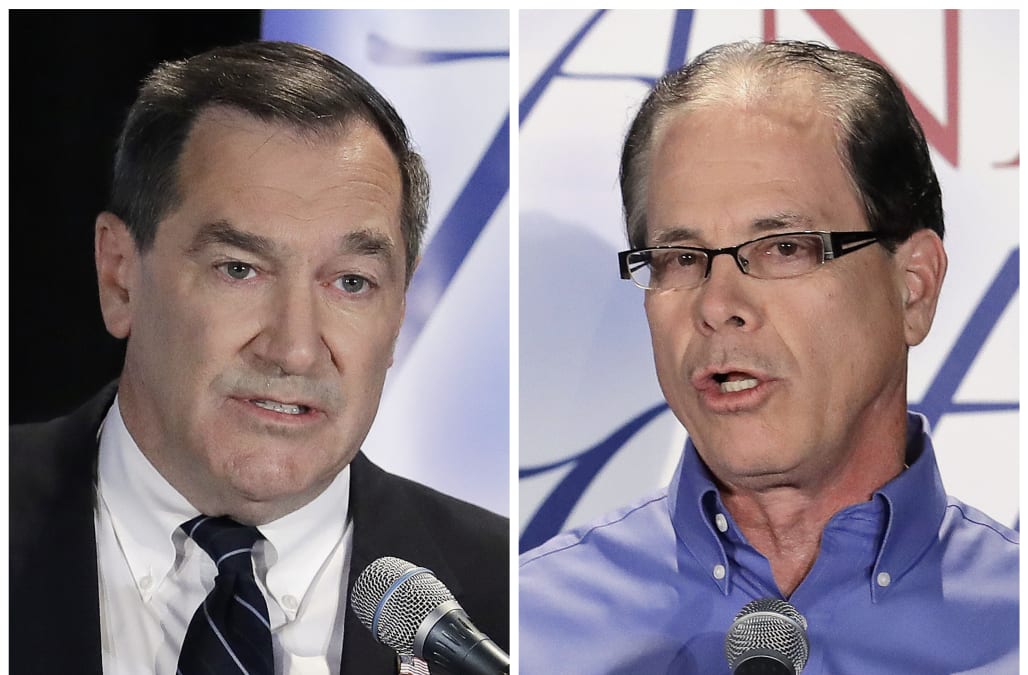 But there's a catch: He isn't a Republican.

Donnelly is among a handful of Senate Democrats in such red states as Missouri, Tennessee and West Virginia who are desperately trying to distance themselves from an ascendant left wing of the party that is fueled by opposition to Trump.

Unlike other vulnerable Democrats, however, Donnelly isn't trying to diffuse the situation with tempered or cautious language. In fact, he has adopted the same incendiary rhetoric that Republicans, including his businessman opponent Mike Braun, are using to fire up the GOP base.

"If you drop somebody in Indiana who didn't know anything about the race, turn the television on and ask them to figure out who was the Democrat and who was the Republican — they couldn't do it," said Mike O'Brien, a Republican strategist who ran Indiana Gov. Eric Holcomb's winning campaign. "He's way over the line from where any self-respecting Democrat would want him to be."

For Donnelly, it's a calculated risk that may very well pay off in a state Trump carried by nearly 20 points two years ago. But in the high-stakes contest with Braun, a seat Democrats know they must hold to retain any chance of winning control of the Senate, it also could backfire by alienating members of his base.

In recent ads, Donnelly has accused "socialists" of wanting "to turn health care over to the government" and derided a "radical left" that wants to abolish Immigration and Customs Enforcement. He also called out party activists who have jeered Republicans dining out at restaurants.

"The attacks and disrespect are so out of control," Donnelly said in an ad released Friday, where he is standing in the middle of a restaurant brawl. He goes on to call for Congress to "build a wall."

Braun says Donnelly "talks a good game" but is only masquerading as a conservative while voting against confirming Supreme Court Justice Brett Kavanaugh and some of Trump's pet issues, such as the GOP-led tax cut and an effort to repeal the Affordable Care Act.

"You got to be willing to buck your party boss," Braun said at a recent debate where he accused Donnelly of falling in-line with the wishes of Senate Minority Leader Chuck Schumer, "who tells (Donnelly) what to do on all the important legislation."

Donnelly's campaign argues the senator has always played it "down the Hoosier common-sense middle" and has equal distaste for the extreme ends of both political parties. They concede, though, that he has sharpened the language in his closing pitch to voters.

"Joe Donnelly's message has been consistent: he's the hired help for Indiana," campaign spokesman Will Baskin-Gerwitz said. "He puts commonsense Hoosiers before any politician or political party."

Democrats say Donnelly may have taken a right turn in his rhetoric, but they add that anyone wavering should consider that Braun has campaigned as someone who will be a consistent ally of Trump.

"Almost every Democrat understands the stakes in this election and understands that voting for Mike Braun — or not voting at all — is giving Donald Trump vast, unchecked power," said Kip Tew, who was chairman of former President Barack Obama's winning 2008 general election campaign in Indiana. "That's the dividing line people have to look at here."

Donnelly's full-throated embrace of culture war issues favored by Trump is perhaps a logical conclusion in a race where policy debates have been supercharged by the president's words and actions. But it is also unusual for the senator, whose public persona is usually that of understated Midwestern politeness.

Then there's health care. After years of Democrats running away from what had been a toxic issue at the polls, Donnelly boasts that he cast the "deciding vote" to save Obama's signature health care law — the same wording the GOP formerly used in attack ads.

He has gone after Braun for supporting a Republican-led lawsuit aimed at eliminating the law, including coverage for those with pre-existing conditions.

"Mike, I can hardly believe that you can stand here and tell everybody you are for coverage of pre-existing conditions," Donnelly said at the debate. "Stand here tonight and tell us you'll denounce that lawsuit."

As the Nov. 6 vote looms, it remains to be seen whether Donnelly's pro-Trump right turn will be a factor.

O'Brien, the GOP operative, said it is unimaginable to think of a Republican running in a blue state supporting a similarly divisive figure.

"Can you imagine someone campaigning on their support for (House Minority Leader) Nancy Pelosi?" he said. "It's bizarro world."

Sign up for "Politics in Focus," a weekly newsletter showcasing the AP's best political reporting from around the country leading up to the midterm elections: https://bit.ly/2ICEr3D