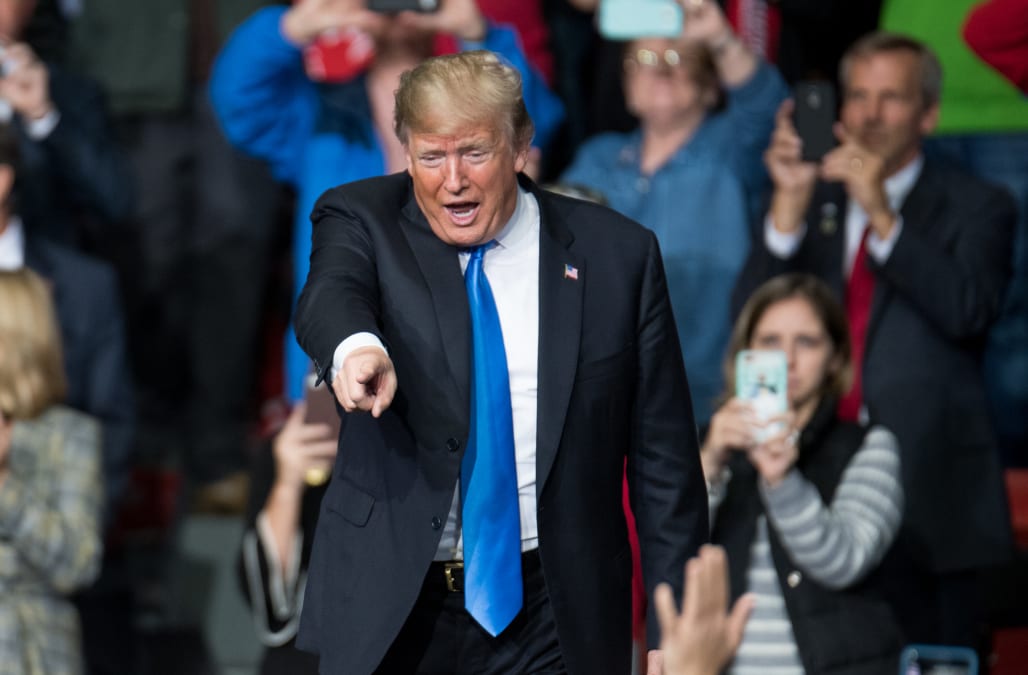 CHARLOTTE, N.C., Oct 26 (Reuters) - President Donald Trump accused the U.S. news media on Friday of using reporting on the suspect in least 14 bombs sent to some of his prominent critics to score political points against him.

Hours after a Trump supporter, Cesar Sayoc, was arrested in Florida in the bomb case, Trump told a political rally in Charlotte, North Carolina, that political violence must never be tolerated.

But any major attempt to heal political divisions was quickly set aside as Trump renewed attacks on his usual targets: the news media and his Democratic opponents.

"We have seen an effort by the media in recent hours to use the sinister actions of one individual to score political points against me and the Republican Party," Trump said.

Trump appeared to be commenting on cable news blanket coverage of the bomb case and how the people targeted are frequently criticized by the president.

Trump was in Charlotte campaigning for Republican candidates ahead of the hotly contested Nov. 6 U.S. congressional elections, with Republicans trying to hang on to control of the House of Representatives and the Senate.

Some in the crowd on Friday quickly chimed in with a cry that is a familiar one at Trump's political rallies: "CNN sucks."

Trump paused while the CNN chant continued, then added: "And they do have a major role to play as far as tone. The media's constant unfair coverage ... and negative attacks only serve to drive people apart and to undermine healthy debate."

When Trump criticized Democrats, the crowd chanted "lock her up," a refrain from the Republican president's 2016 campaign when he called Democratic opponent Hillary Clinton "Crooked Hillary." Trump again referred to Clinton as "Crooked Hillary" on Friday night when he listed Democrats who supposedly had supported building a wall on the U.S. border with Mexico.

Clinton was the target of one of the bombs sent this week, which was intercepted during a routine off-site mail screening.

"They're gonna be reporting about you tonight," Trump told the crowd in North Carolina.

Trump said Republicans did not try to seek political gain over the Democrats when a supporter of democratic socialist Bernie Sanders opened fire on congressional Republicans at a baseball field last year and severely wounded Representative Steve Scalise.

"We did not use that heinous attempt at mass murder for political gain because that would have been wrong. ... Nor do we blame the Democrat party every time radical leftists seize and destroy public property and unleash violence and mayhem," he said.

Trump made similar comments on Thursday, blaming the news media for stirring up anger and hateful political rhetoric as two more suspicious packages were discovered. In a post on Twitter he referred to "purposely false and inaccurate reporting of the Mainstream Media."

Trump hinted earlier on Friday in a tweet that the news media's coverage of the bomb case was taking attention away from the midterm elections at a time when Republicans may be hitting their stride.

"Republicans all over the country, we're hot," Trump said in Charlotte. "We're hot and I don't think they’re going to cool us off. They try so hard. But I don't think that's going to happen."