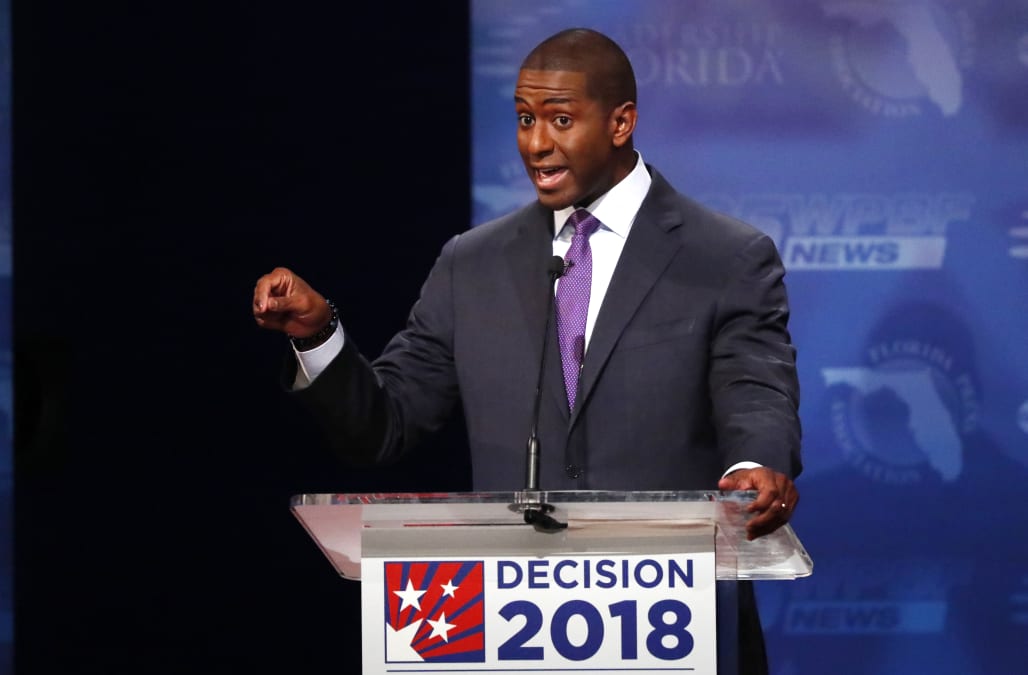 Florida gubernatorial candidate Andrew Gillum, a Democrat who’s been the target of bald-faced racism over the course of his campaign, was blistering in his criticism of his GOP opponent during a Wednesday night debate.

Gillum, who would be the state’s first black governor if elected, came just short of calling Rep. Ron DeSantis a racist as the congressman was grilled on his ties to neo-Nazis and white supremacists.

As my grandmother used to say — a hit dog will holler. pic.twitter.com/kC34Ldd0is

DeSantis has been dogged by accusations of racism for months. In August, he told voters not to “monkey this up” by voting for Gillum. The phrase was interpreted as a racist dog-whistle, but DeSantis ― who has a history of spreading racist and Islamophobic conspiracy theories ― insisted he said it innocently.

During Wednesday’s debate, DeSantis got visibly angry when he was questioned about earlier speaking engagements at racially charged far-right conferences and accepting campaign contributions from a donor who’d called former President Barack Obama a racial epithet on Twitter.

“How the hell am I supposed to know every single statement somebody makes?” DeSantis shot back. “I am not going to bow down to the altar of political correctness. I’m not going to let the media smear me.”

To that, Gillum replied: “My grandmother used to say a hit dog will holler, and it hollered through this room,” prompting loud cheers from his supporters in the crowd.

Gillum, who has served as the mayor of Tallahassee since 2014, has been targeted in two extremely racist robocalls during his campaign. The most recent went out on Tuesday and featured an actor using an exaggerated minstrel dialect, saying: “Well hello there. I is the Negro Andrew Gillum, and I be asking you to make me governor of this here state of Florida.”

A white supremacist group based in Idaho was behind both of the robocalls. DeSantis has vehemently denied having anything to do with them.