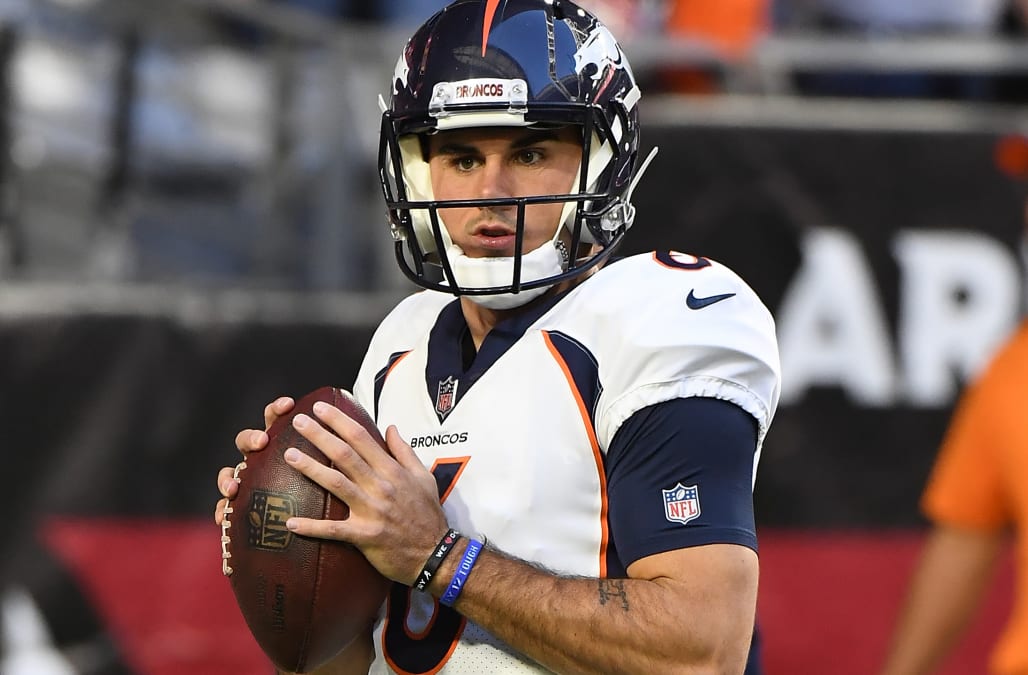 DENVER (AP) — Denver Broncos backup quarterback Chad Kelly was arrested early Tuesday on suspicion of criminal trespass after a couple reported he came into their suburban house uninvited and sat down on their couch "mumbling incoherently," according to court records.

The 24-year-old Kelly posted $2,500 bond and was released later Tuesday.

According to court records, a man and a woman told police that a stranger came into their Englewood home after 1 a.m. The intruder sat down on the couch next to the woman, who was holding the couple's young child, and was "mumbling incoherently," according to the records.

The man yelled at the intruder to get out and hit him in the back with a vacuum tube. The homeowners showed police surveillance video of a man wearing dark pants, a white long sleeve shirt with a brown vest and a red scarf around his neck entering the front door.

The homeowner told police he thought the door was locked but police found no signs that someone had forced their way inside.

Police said they found Kelly sitting inside a black SUV parked about a block from the couple's home. Kelly matched the couple's description and the man later identified him as the person who came into the house, according to court documents.

Kelly is due back in court Wednesday.

In a statement, the Broncos said they were disappointed. "Our organization has been in contact with Chad, and we are in the process of gathering more information," the statement said.

"We are reviewing the matter," the NFL said in an email to The Associated Press.

The Broncos chose Kelly with the final pick of the 2017 NFL draft. Although Kelly brought an attitude that had often crossed the line in college, Broncos general manager John Elway said fellow Hall of Fame quarterback Jim Kelly personally vouched for his nephew, so Elway signed off on the selection.

Chad Kelly missed his rookie season while recovering from knee and wrist injuries, then beat out former first-round draft pick Paxton Lynch last summer to serve as the backup for quarterback Case Keenum.

Kelly has played just one snap, a kneel-down on the final play of the first half against the Rams two weeks ago while Keenum was being evaluated for a concussion.

On Monday, coach Vance Joseph said he'd be comfortable with Kelly at quarterback should anything happen to Keenum.

Kelly's arrest could put him in line for discipline from the Broncos or the league, which doesn't need a court conviction to mete out punishment for a violation of the NFL's code of conduct.

Kelly's spectacular college career was marked by off-field slip-ups, although he hadn't been in any trouble since the Broncos drafted him.

He was kicked off the Clemson team in 2014 after arguing with coaches during the spring game. He also was arrested after a bar fight in 2014, eventually pleading guilty to a misdemeanor charge of disorderly conduct.

In October 2016, he was involved in a brawl at his brother's high school football game in New York. He ran onto the field after his brother, Casey Kelly, apparently took a late hit and video shows several coaches restraining him on the field.

Although he didn't play in the Senior Bowl after his final season at Ole Miss because of a right knee injury, he was in attendance all week in Mobile, Alabama, so he could talk with NFL teams about his off-field troubles.

At the time, he said being upfront about his missteps was important: "You've got to be honest, of course, but you've got to admit to what you did and you've got to try to convince them that you've learned from those mistakes and that you're not going to make them again. The owner doesn't want to hear about it. The GM doesn't want to hear about what you did. They want to know if you've learned from it and won't make the same mistake twice."