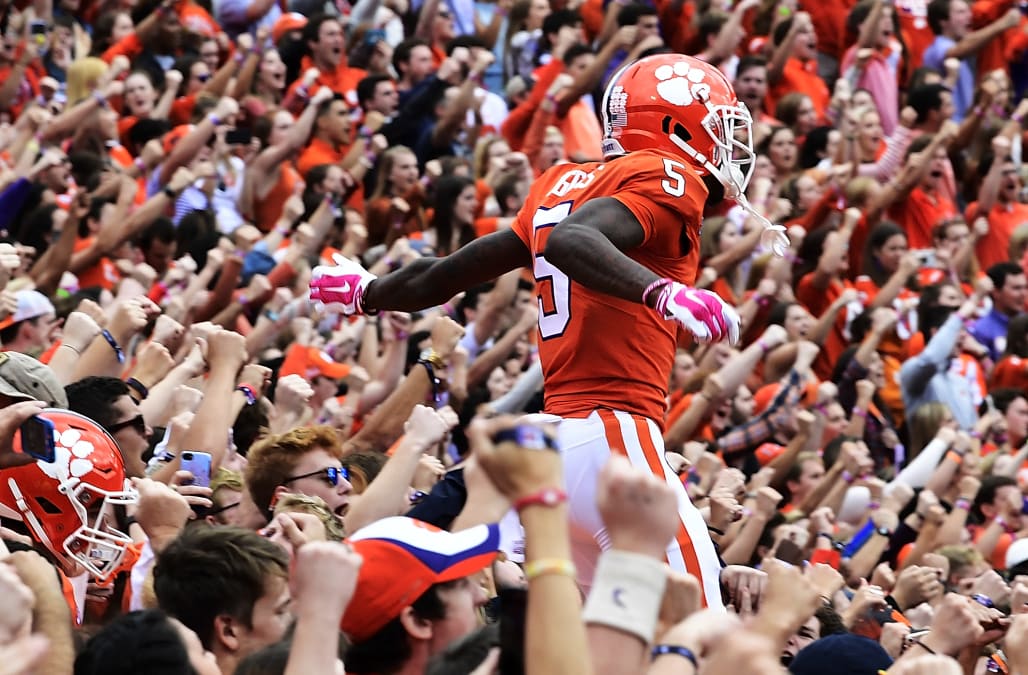 We are now eight weeks into the college football season, and things are starting to shake up a bit.

Two more playoff contenders lost on Saturday, but only one of those teams — North Carolina State — was effectively eliminated from playoff contention. Meanwhile, despite Ohio State's ugly loss to Purdue, it did not have much of an impact on their path to the playoff.

We have learned a few things over the years about how the committee picks the final four, and we have some idea of what teams need to do to make the playoff. Below, we ranked the 13 teams that still have a legit shot at making it.

13 schools still with a shot at the College Football Playoff

On the outside, looking in, for now: Washington, Washington State, and Kentucky

One of the conferences is guaranteed to be left out and the way things are shaking out this year, that number could increase to two or three when the music stops this season. At this point, the Pac-12 champ is just not getting into the playoff over the Big Ten champ, the Big 12 champ, or Notre Dame. They might not even get in over a second SEC team. As for Kentucky, they would need to beat Georgia and Alabama. That doesn't seem realistic.

Key games remaining: After a game against Baylor, WVU's final four games are TCU and Oklahoma at home and Oklahoma State and Texas on the road.

One thing to know: There is no guarantee the Big 12 will get a team in the playoff, and if it does, WVU appears to have the longest shot out of the group that also includes Oklahoma and Texas. The Mountaineers have a loss to Iowa State and the tougher road to winning out.

Key games remaining: Iowa's next three games are Penn State and Purdue on the road and Northwestern at home.

One thing to know: The biggest impact of Ohio State's loss was that it re-opened the door for the winner of the Big Ten West if it is Iowa, and if they can get to the title game with one loss and win the game. It's not a good chance, but there is a path.

Key games remaining: UCF has Cincinnati and USF the final two weeks of the season.

One thing to know: As long as Notre Dame is in the mix, it nearly eliminates any good shot UCF has to sneak into the playoff party. If the Irish are in, at least two of the Power 5 conference champs are going to be knocked out and it is hard to imagine the committee taking UCF and knocking out a third conference champ.

Key games remaining: Florida's only ranked remaining opponent is Georgia at a neutral site this week. They do have to go on the road to face Florida State.

One thing to know: Florida still has a lot of doubters, but that will go away if they can beat Georgia and take command of the SEC East.

Key games remaining: Oklahoma still has Texas Tech and West Virginia on the road, and Oklahoma State at home.

One thing to know: OU is in the same boat as Texas and West Virginia. Win out, win the Big 12 title game, and that might be enough.

One thing to know: Texas has looked mediocre at times, but they might also be undefeated if not for an ill-timed lightning delay against Maryland.

Key games remaining: LSU still has to play Alabama at home and Texas A&M on the road.

One thing to know: It's pretty simple for LSU: Beat Alabama and they will probably go to the playoff. But if they lose — even a close game — the Tigers are probably out.

Key games remaining: Georgia is in the middle of a three-game stretch against ranked opponents. It started with LSU but they still have Florida and Kentucky, followed by Auburn at home.

One thing to know: Despite Georgia's loss to LSU, they still have the better chance to make the playoff thanks to the easier path in the SEC East.

Key games remaining: Michigan still has to get by Penn State at home and Ohio State on the road.

Key games remaining: Ohio State still has Michigan State on the road and Michigan at home.

One thing to know: The loss to Purdue did not change much. The winner of the Big Ten East is almost certainly going to be decided by the Ohio State-Michigan game. If the Buckeyes win that game and then win the conference title game, they will still be Big Ten champs with just one loss. In other words, Ohio State still has a good shot at the playoff. The loss did solidify Notre Dame's spot a tad and now there will be some debate over whether the Big Ten is more deserving of a playoff spot than the Big 12.

Key games remaining: Notre Dame's final four games are Northwestern on the road, FSU and Syracuse at home, and then USC in California.

One thing to know: Notre Dame is now one of only three remaining undefeated power schools.

Key games remaining: Clemson has no ranked opponents left, but do have to go on the road to face Boston College and Florida State.

One thing to know: Clemson's path to finishing undefeated is easier than Alabama's path, but Clemson also stands to lose more if they do stumble along the way.

One thing to know: The Tide's schedule is not easy, but even if they lose, they would probably still be the top team among those with one loss. But if they lose to LSU and don't make the SEC title game, would the committee dare take two SEC teams, Notre Dame, and Clemson, and leave out the Big Ten and Big 12 teams completely?

Now check out some waiver-wire players to target in fantasy football.