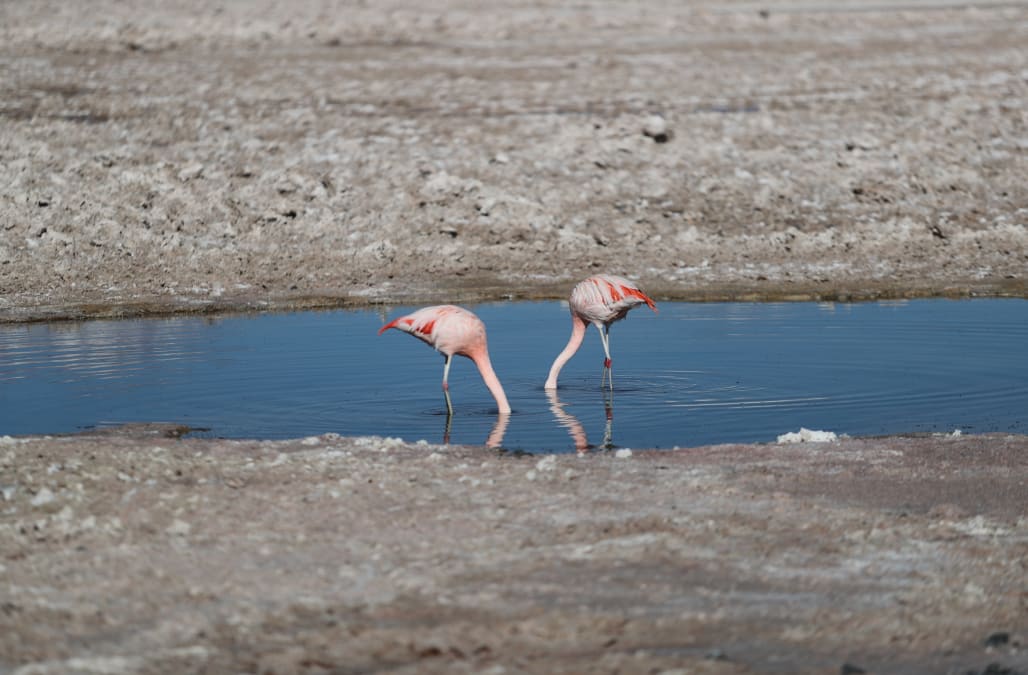 U.S.-based Albemarle Corp and Chile's SQM operate just 3 miles apart in the remote Salar, a basin in the Atacama that is home to one of the world's richest deposits of high-grade lithium. Lithium-ion batteries are key components for most consumer electronics, from cellphones and laptops to electric cars.

In celebrating the new contracts, the two companies said they were confident they could significantly boost output without drawing more than their current quotas of lithium-rich brine, or saltwater, that has for millennia accumulated in pools beneath the Atacama. The rivals said each had all the brine they needed for current and future production.

"I don't see any issue with our ability to get (the brine) ... today, tomorrow and throughout the term of that agreement,” which ends in 2043, Albemarle CEO Luke Kissam told investors in August.

A nun sprinkles holy water on believers inside a church during a religious holiday in the Peine area on the Atacama salt flat in the Atacama desert, Chile, August 15, 2018.

Licancabur volcano is seen from a dry crop field at Salar area next to San Pedro de Atacama, Chile, August 15, 2018.

The shadow of a roof is cast on an old corral at Cejar lagoon at Atacama salt flat near San Pedro de Atacama, Chile, August 15, 2018.

Flamingo birds are seen at Chaxa lagoon on the Atacama salt flat in the Atacama desert, Chile, August 15, 2018.

Brine pools from a lithium mine, that belongs U.S.-based Albemarle Corp, is seen on the Atacama salt flat in the Atacama desert, Chile, August 16, 2018.

A cat jumps over a dried irrigation canal at Salar area next to San Pedro de Atacama, Chile, August 15, 2018.

Former president of the Atacamenos Peoples Council, Ana Ramos, holds up a handful of alfalfa on a dried alfalfa field at Salar area next to San Pedro de Atacama, Chile, August 15, 2018.

Locals dance amidst confetti at sunset during a religious holiday in the Peine area on the Atacama salt flat in the Atacama desert, Chile, August 15, 2018.

A view through a car window of a mining camp belonging to SQM lithium plant during nightfall near the Peine area on the Atacama salt flat in the Atacama desert, Chile, August 15, 2018.

Water flows in an irrigation canal in front of Lascar volcano in the Talabre area at Atacama salt flat in the Atacama desert, Chile, August 16, 2018.

But a Reuters review of filings with Chile's environmental regulator shows Albemarle striking a different tone, expressing concern about how much brine rival SQM had been drawing and the impact that could have on future production from the area.

The true state of the Salar's water supply, both fresh and saltwater, has become an obsession of lithium industry watchers because of the area's huge importance in satisfying soaring global demand for the powdery white metal. The area is the most cost-efficient place in the world to mine the metal, and both SQM and Albemarle have staked much of their future production on the Salar.

In the filings, which have not been previously reported, Albemarle voices concern about a 2016 investigation by Chilean authorities that found overa period of several years SQM sucked up more of the lithium-rich brine from beneath the Salar than its permits allowed.

In a March 2017 filing, for example, Albemarle said it was critical for the authorities to determine how much SQM had overdrawn because that could affect the availability of brine for other projects.

That filing came a month after Eduardo Bitran, who was then head of Chile's state development agency, Corfo, raised similar concerns about the amount of brine SQM had been drawing and other infractions. In a letter to the environmental regulator, Bitran wrote that SQM's actions pose a "severe risk" to the ecosystem of the Salar and its brine reserves.

Chile's environmental regulator has said SQM made changes to how it monitors wells without authorization, making it difficult to track the impact of SQM's pumping on brine supplies. (To see document: http://bit.ly/2EpFZjJ)

SQM has not confirmed overdrawing brine. But over nearly two years it has filed four plans with regulators to bring its operations back into line with environmental approvals, which, among other things, specify how much brine SQM can pump. The first three plans were returned to SQM by regulators for further revisions; the latest, filed in September, has yet to receive a response.

Meanwhile, SQM has accused Albemarle of overdrawing brine at its mine and questioned in a filing whether its rival's actions could have repercussions on the availability of brine reserves in the Salar. Albemarle declined comment when asked by Reuters whether that was correct. (To see document: https://bit.ly/2EtVYxw)

Hydro-geologists and environmental chemists consulted by Reuters on the filings said the back-and-forth between the miners underscores widespread concerns over just how much brine is left and how long it will last. They said the filings show that neither the Chilean authorities nor the companies have a clear picture of the water situation at a time when the miners have been given the green light to boost production.

Lithium analyst Joe Lowry said the filings had potential implications for the global production of lithium, which has become one of the world's hottest commodities.

In a recent interview with Reuters, Kissam, Albemarle's CEO, insisted there was “no question” that there was enough water in the Salar to maintainlithium operations. The company can produce 80,000 metric tons of lithium annually in the Salar - roughly 36 percent of global demand in 2017 - helped by technology it has developed that will allow it to extract more lithium from the same amount of brine, he said.

He declined to comment on the concerns expressed by his company in the regulatory filings about the area's water supplies. In one such filing, Albemarle said its rival's compliance plan failed to sufficiently address regulators' concerns and "raises doubts ... about the sustainability in time of both companies' operations."

Kissam also said his company was currently using only the amount of water allowed by regulators. “We´re not overdrawing. We´re pumping at the rates well within our permits,” he said.

For its part, SQM, controlled by Julio Ponce Lerou, a reclusive Chilean billionaire, says it already has all the brine it needs to produce more lithium.

SQM declined to comment on its water fight with Albemarle. It said in a statement to Reuters that its submissions to the regulator spoke for themselves. But, it added, “Our conclusions indicate that neither the environmental sustainability nor productivity of the Salar de Atacama are compromised.”

For Mariana Cervetto, a hydro-geologist who has reviewed technical aspects of the case for both Corfo, the state development agency, and the local indigenous communities that surround the Atacama salt flat, questions still outweigh answers.

“When people ask me, ‘Is the water going to run out?’ I tell them, ‘The truth is, we don’t know,” Cervetto said.

The spat between Albemarle and SQM can be traced back to 2013, when government inspectors arrived at SQM's installations and found something amiss.

The 23 dead trees represented one-third of those SQM had committed to monitor. Like canaries in a coal mine, the health of the trees was meant to act as an early warning signal of water problems. Two years later, more trees were dying but SQM failed to notify authorities, according to government inspection reports reviewed by Reuters.

"If SQM is extracting more brine than it is permitted from the Salar, that can have repercussions on the availability of reserves in the basin for other projects,” wrote lawyers for Albemarle subsidiary Rockwood Lithium Ltd in the March 2017 filing.

SQM hit back the following month. It wrote to the regulator saying it was "outrageous" that Albemarle was presenting itself as a defender of the environment when Albemarle had acknowledged overdrawing water in 2008 and between 2010-2012. Albemarle declined comment when asked by Reuters whether that was correct.

Corfo submitted a new study on the availability of water in the Salar to the environmental regulator in March that found more water and brine was leaving the system through pumping and evaporation than was coming back in via rain and snowfall.

In the filing, Corfo said, however, the study couldn't pinpoint which of the copper or lithium miners operating in the Salar was to blame for the imbalance. It said this uncertainty was reason enough for regulators to take steps to restrict extraction.

That process is now underway. Reuters reported exclusively in August that Chile's water regulator was preparing restrictions on new water rights in the Salar in part because of uncertainty over how much extraction it can support..