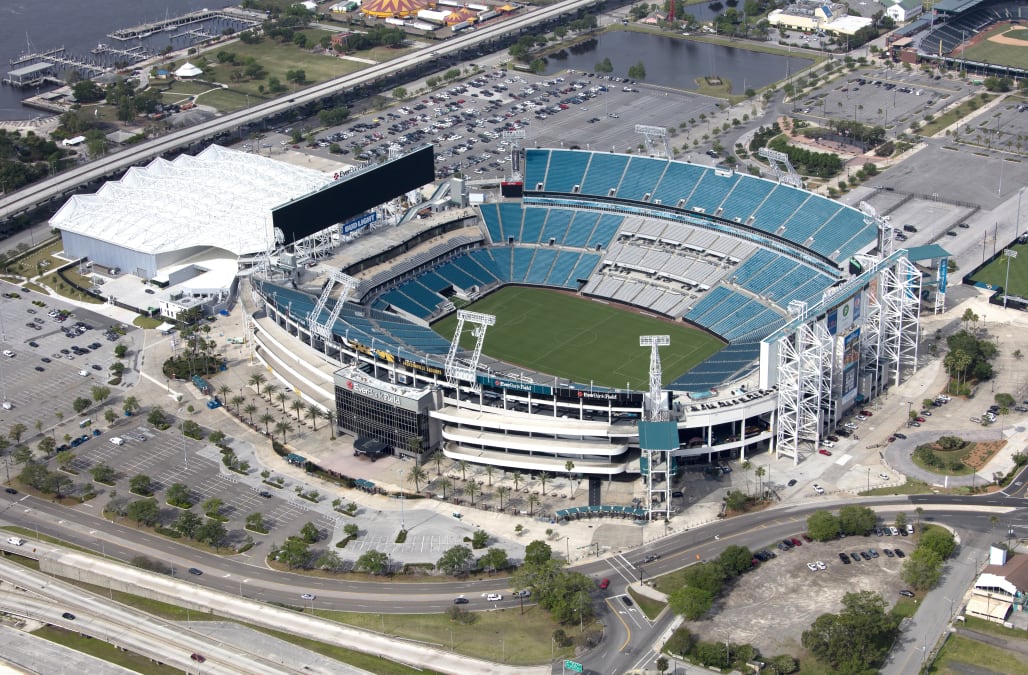 JACKSONVILLE, Fla. (AP) — Six people have been wounded, three critically, in a possible gang-related shooting blocks from the Florida stadium where the NFL's Houston Texans played and defeated the Jacksonville Jaguars on Sunday afternoon, authorities said.

Ron Lendvay, director of investigations for the Jacksonville Sheriff's Office, said several shots were fired about 12:35 p.m. Sunday on a boulevard outside in the general area of the stadium and that five men and one woman were struck by bullets and wounded. He said all were rushed to hospitals and that they ranged in age from their 20s to the 70s.

The shooting erupted before the game's scheduled 1 p.m. start, but Lendvay reported no link to the game, which went on and concluded without incident.

The Texans won their fourth consecutive game Sunday, defeating the Jaguars 20-7 to take a one-game lead in the AFC South at the stadium, TIAA Bank Field.

Local media reports cited authorities as saying the shooting had had no impact on game day activities in and around the stadium.

Lendvay told reporters that a shooter fired from the passenger side of a gray, four-door sedan driven by someone else and that the victims were outside on the sidewalk near a laundromat. He said the car immediately fled the area and that detectives were checking surveillance video to try to identify the vehicle and locate the occupants.

"There were at least two people in the car," Lendvay said. He added that investigators didn't know if any others were in the car and he didn't rule out the possibility of additional shooters elsewhere.

Authorities had no immediate report on what led up to the shootings. The sheriff's office tweeted that three of the wounded were rushed in critical condition for care. An update on their conditions wasn't immediately available late Sunday and they were not identified by name.

"A couple of them were in very serious condition on their arrival at the hospital," Lendvay said. He added five of the wounded were rushed by paramedics for emergency care and the sixth by private vehicle.

He said authorities have been unable to immediately determine whether there was any relationship among the wounded.

"We haven't been able to interview them at all. It's hard to say if they are all associated or not," he added.

At an afternoon news briefing outside the laundromat where the shooting erupted, Lendvay said, authorities were conducting an exhaustive investigation. He added that authorities made plans to escort fans to any cars parked near the scene, allowing them to leave unimpeded once the game ended.

Jacksonville City Councilman Reggie Gaffney, who represents the district where the shooting occurred, told local media that he was aware of crime problems in the neighborhood. He said a greater law enforcement presence was needed there.

"In talking to the sheriff's department; they are going to beef up patrols. Evidently, it's not working. We have a crime issue," Gaffney said. "Every other week and every other month out there, it's too much."

Florida Gov. Rick Scott also said in a statement that he had reached out to Jacksonville Sheriff Mike Williams, offering any state resources Jacksonville may need.

See more on the NFL:

Highest-paid player on every NFL team

Star Lotulelei attended high school and college in Utah, but he was born on the Pacific island nation of Tonga.

Related: This Is What It Takes to Own an NFL Football Team

Terron Armstead signed his current five-year, $65 million contract prior to the 2016 season, but he’s failed to start 15 of the Saints’ 32 regular season games since that point.

After five years in Buffalo, Stephon Gilmore jumped ship for the division-rival Patriots prior to last season, earning a trip to the Super Bowl in his first season in New England.

Check Out: Patriots’ Tom Brady’s Net Worth on His 40th Birthday

Since winning Super Bowl XLVII to cap a successful 2012 season, Flacco has seen his performance decline, with 74 interceptions to just 98 touchdowns.

Find Out: 24 Athletes Who Lost Their Huge Endorsement Deals

The Jets — who signed Trumaine Johnson to a five-year $72.5 million contract this offseason — are hoping he returns to his career high in interceptions of seven from 2015 rather than the one and two he logged in 2016 and 2017 respectively.

Jarvis Landry has a lot riding on him to replicate last year’s 112 receptions as he joins a Browns team that went a disappointing 0-16 last year.

Find Out: Best and Worst Things to Buy at an NFL Game

Ryan Tannehill’s 12 interceptions to just 19 touchdowns over 13 games last year could have some Dolphins fans regretting that big contract.

After being limited to just six starts in his first season, Taylor Lewan has missed just one game in the last three years.

Chandler Jones is an elite pass rusher, with more than 40 sacks over the last three seasons in New England and Arizona.

See Where Arizona Ranks: Most and Least Expensive Stadiums for Fans to Watch a Football Game

Watch: The Cost of the Chargers’ Move to LA

Kirk Cousins came to Minnesota on a short three-year deal, but all $84 million in it is guaranteed. And his millions will likely last him — Cousins is one of the best NFL players when it comes to money.

Ben Roethlisberger is still playing on a four-year, $87.4 million contract he signed that keeps him in the Steel City through 2019.

More on Steelers in the Super Bowl: The Richest Super Bowl MVPs of All Time

The ink might not yet be dry on the five-year extension Odell Beckham Jr. signed with the Giants just before the season started.

Place Your Bets — If You Can: Sports Betting Now Legal in Several States

In this instance, Mr. Smith went to Washington via an offseason trade after leading the Chiefs to 50 wins during his five seasons in Kansas City.

The Washington Redskins and 9 Other: Companies You Would Never Guess Warren Buffett Loves

Marcell Dareus parlayed his 10-sack performance in 2014 into his current six-year $96.6 million deal, but the league might have gotten wise since then — he’s only managed 5.5 sacks since signing the deal.

See Why: The Benefits of Hosting a Super Bowl Are Exaggerated

Gerald McCoy — who has been a Buc since they selected him third overall in the 2010 draft — needs only one and a half sacks this year to reach 50 for his career.

Check Out: The Richest Defensive Linemen This NFL Season

Andy Dalton might be the focus of some ire from Bengals fans, but it’s worth noting that the team is 64-44-2 since 2011 when he’s under center.

Tyron Smith signed his eight-year, $97.6 million contract prior to this season, but he can opt out after next season and test free agency.

That Other Famous Dallas Cowboy: See How Much Tony Romo Is Worth

The nearly $21 million guaranteed for Watt is dwarfed by the $41.6 million he helped raise for Hurricane Harvey relief efforts, the biggest crowd-sourced fundraiser in history.

Justin Houston’s 69.5 career sacks have to sting for Browns fans: They traded the Chiefs the pick they selected him with to grab Phil Taylor and his seven career sacks.

See: 14 Richest Athletes of All Time

The Eagles had the fourth-ranked defense last year en route to their Super Bowl championship.

Find Out: How Much Money Do Super Bowl Players Get If They Win?

Cam Newton has the chance to opt out of his current contract at the end of the season, leaving him with a decision about whether he should test free agency for an even bigger deal in 2019.

Von Miller’s huge deal — signed in July 2016 — came on the heels of the team winning the Super Bowl behind its strong defense.

Andrew Luck recently revealed that the shoulder injury that kept him from playing a down last season could be traced back to a snowboarding accident in 2016.

See Who the MVPs of NFL Wealth Are: The Richest NFL MVPs of All Time

Derek Carr signed his five-year, $125 million deal in June 2017 — the same year he saw his play regress with more than double the interceptions of the year prior.

Aaron Rodgers is looking to put the Packers back in the playoffs after missing nine games last season.

Aaron Donald’s $135 million deal came after 18 months of negotiations and a holdout over the preseason for the star defensive tackle.

Sports and Other: Industries Creating the Most Billionaires

Traded from the Patriots on Halloween in 2017, Garoppolo was “spooky” good over five starts for the Niners that year, prompting a big contract in the offseason.

More 49ers: Colin Kaepernick Net Worth — See What the Face of Nike Is Worth

Up until Sept. 1, 2018, Khalil Mack was the highest-paid player on the Raiders, but a trade to Chicago has him in a Bear uniform now.

Matt Ryan failed to bounce back from the devastating loss to the Patriots in Super Bowl LI in 2017, throwing just 20 touchdowns to 12 interceptions.

More from Aol.com:
Former teammates paint disturbing picture of Aaron Hernandez in Patriots locker room
Grisly details emerge in killing of Iowa State golfer Celia Barquin Arozamena
Cristiano Ronaldo's lawyer says rape allegations are based on 'fabricated documents' that may have been sold to the media by a cyber criminal