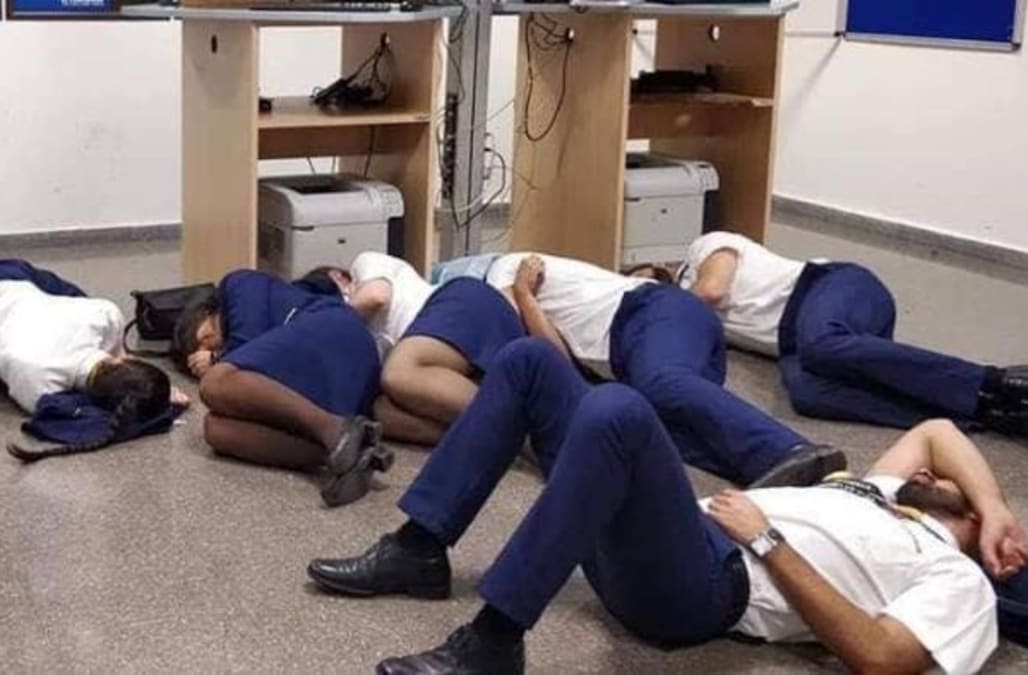 An airline's crew were lying on the floor, apparently trying to sleep in a brightly-lit room.

It looked a little too perfectly damning, to be honest.

These were, though, 24 members of four Ryanair crews stranded by weather in Málaga, Spain and not provided with a hotel by the airline.

This is a Ryanair 737 crew based in Portugal, stranded in Malaga, Spain a couple of nights ago due to storms. They are sleeping on the floor of the Ryanair crew room. RYR is earning €1.25 billion this year but will not put stranded crews in a hotel for the night. @peterbellew ? pic.twitter.com/lILWZVqqGj

Budget airline Ryanair isn't known for its demure approach to either business or humanity. It's endured many employee relations issues.

I asked Ryanair whether this wasn't a slightly unseemly move, one that may even have privacy implications.

An airline spokeswoman told me:

The publication of this video reveals the facts and exposes the SNPVAC union fake news/false claims.This video proves that the original picture was staged and no crew 'slept on the floor.' All Ryanair offices and crew rooms are equipped for security reasons with CCTV cameras and notifications of same as required by GDPR [General Data Protection Regulation].

Why, though, didn't the airline offer the crew a hotel for the night? Ryanair's spokeswoman insisted:

Due to storms in Porto (13 Oct) a number of flights diverted to Malaga and as this was a Spanish national holiday, hotels were fully booked.  The crew spent a short period of time in the crew room before being moved to a VIP lounge, and returned to Porto the next day (none of the crew operated flights).

While #Ryanair’s COO @PeterBellew states “all hotels were completely booked out in Malaga” — this is simply not the truth.

I’ve also spoken to the ‘SALA VIP’ lounge at Malaga Airport, who confirmed no crew from any airline entered the lounge...https://t.co/OtcaHr6H8N

‘Sala VIP’ lounge confirmed to me they have record of all visitors, no Ryanair crew entered,& the lounge closed at 11pm.

Dear Alex. Please check VIP lounge at Malaga who kindly opened at 0515 to assist our crew and pax. The weekend was fiesta nacional de espana and Malaga packed. Our handler called 42 hotels near airport who were full. Apologies for inconvenience.

There was nothing for it but to dutifully ask Bruno Fialho, vice-president of the SNPVAC union, to offer me his two minutes on Ryanair's claims.

Fialho's version was a little different.

He told me that the 24 crew members were placed in the Ryanair crew room "so that they were kept isolated from the hundreds of passengers that were in the terminal."

For hours, the Crew attempted to contact Ryanair OPS and LESMA (local RYR Ground handling agent) to obtain information about the hotel accommodation and both replied that there weren't any hotels available. The Crew also contacted directly some hotels in the Málaga area and there were rooms available.

This is already not looking good. Fialho says that the crew were sent to an airport lounge at around 3.45 a.m. There were chairs, sofas and toilets available, but no food or drinks.

Then, mordant comedy. Fialho told me:

After the security guard made several phone calls, the Crew was allowed into the airport terminal to have some breakfast. Finally, at 9 a.m. the LESMA duty manager informs that he managed to get a hotel for everyone. However, the Crew was already informed of the flight at 10:00 a.m. (just 1 hour later) which the duty manager wasn't aware.

No, it wasn't over. Fialho again:

At 09.55 a.m. the Crew is sent on a bus to the aircraft with the information that 2 pilots were already there to take the aircraft ferry to Porto. When they got there, the aircraft was closed and the crew were left on the ramp. The Pilots decide to open the aircraft to wait inside as the weather conditions were adverse.

So the took off shortly afterwards, right? Well, no, says Fialho.

At 10.40 a.m. the Crew is informed of a 2 hour slot restriction and that they have to wait for another 10 pilots from Málaga Airport and other bases to take the same flight to Porto in order to operate the afternoon flights. The operating captain didn't have permission to leave Málaga before those 10 pilots arrived.

Please tell me you're still with me, as there's more. A lot more. Next, Fialho says:

At 11.20 a.m., the Crew asks the operating Captain to open the aircraft bars and get something to eat, a request that was denied by Operations. The Crew decided to ignore the instruction and opened the bar anyway, as they were feeling very hungry.

Fialho says that the flight finally landed in Porto at 1.42 p.m. Worse, he says, the Crew Controller was convinced that the crews had been given hotels and were properly rested, so they were being scheduled for new flights.

Yes, I hear you cry, but what about the staged photo? According to Fialho:

The photo was a gesture of protest, that immediately became viral. Laying on the floor was the only option to rest -- their 'suitable accommodation.' And precisely due to the unusual, deplorable and despicable treatment given to the Crew, Ryanair became the object of a social media frenzy.

Fialho added another kink to the story of the photo:

Ryanair rushes to call it 'staged,' but not before the Company's Chief Operating Officer apologized to the crew via Twitter.

Fialho believes this is merely another example of Ryanair's cold-blooded attitude to employee relations. But what about the privacy issue with the video? He told me:

Regarding the evident breach of the Global Data Protection Regulations we will discuss this in the appropriate institutions. Ryanair did us all a favor by providing evidence that in fact there were no minimum conditions for their employees to spend the night with dignity.

Above all, however, a single impression remains -- that relations between Ryanair and its employees are parlous at best.

How you treat your employees says so much about how your company is run. And once employer/employee unpleasantness reaches the public sphere, please imagine what your customers will think.

Then again, I fear that many will merely mutter: "Yup, that's Ryanair for you."

More from Inc.:
5 Tiny Tweaks to Your Daily Routine That Will Double Your Energy and Productivity
6 Childhood Dream Jobs That Actually Pay Big Time
Are Fairy Tales Harmful to a Girl's Self-Worth? Two Movie Stars Weigh In