Lion cub raised by dog after cub's mother rejects it 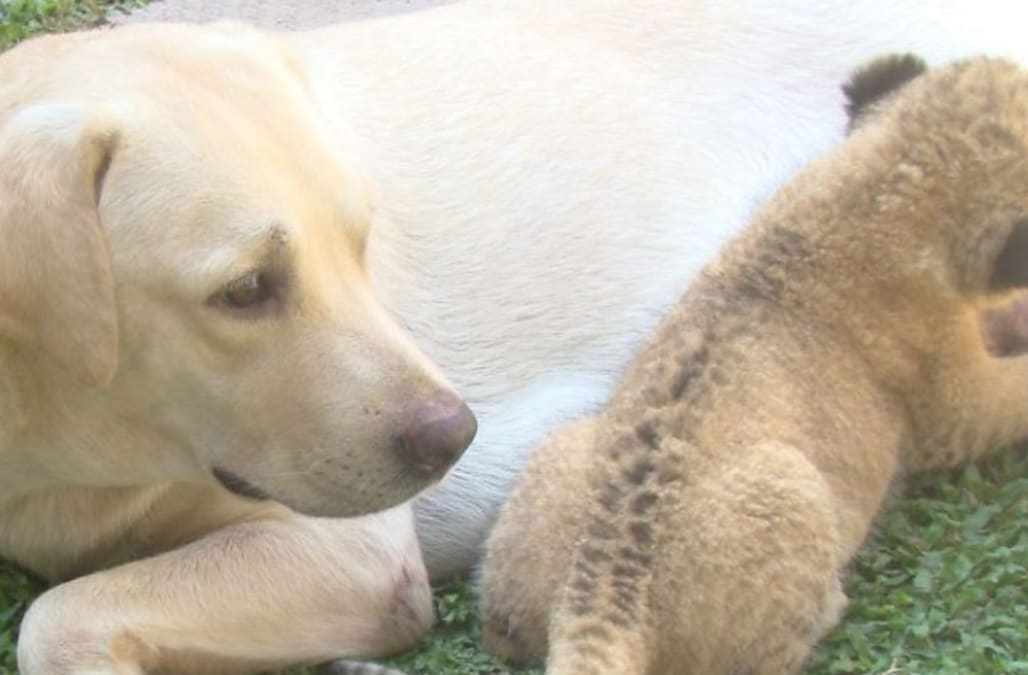 Everyone knows dogs rule the internet, but one pup who stepped in as an interspecies foster mother has really raised the bar.

It started in 2014, when a lion cub born at a zoo in Sri Lanka was rejected by its mother. Concerned zookeepers sought out a surrogate family for the cub, and found a potential candidate in a dog who had just given birth to a litter of puppies.

At first, the canine mom was hesitant to allow the cub into her inner circle, according to owner Heshan Mendis. “After five, six hours, the dog changed, and she treated the lion cub as her own pup,” he said. “She licked him and she loves the lion cub more than her pups."

In a video shared by BBC News, the sweet dog is even seen nursing the adorable little cub along with the rest of her biological babies; apparently, she nursed the cub for three weeks. The cub is even seen rough-housing with his new puppy siblings, who look thrilled to have him as a playmate.

Baby animals
(Photo Credit: Corbis)
(Photo Credit: Corbis)
Two weeks old baby tiger 'Schuna' is pictured on September 5, 2010 at the zoo in Wuppertal, western Germany. As 'Schuna' was not accepted by its mother 'Mymosa', the animal is bottle-fed and brought up by keepers. (Photo credit: HORST OSSINGER/AFP/Getty Images)
Giraffe mother 'Jujis' (L) looks after her giraffe baby 'Thabo' in their enclosure at the zoo of Hanover, northern Germany on August 12, 2011. The 1.90 metre tall and 80 kilogramme heavy Rothschild giraffe baby will be fed by his mother for th next15 months. The Rothschild giraffe is among the most endangered giraffe subspecies with only a few hundred members in the wild.  (Photo credit: HOLGER HOLLEMANN/AFP/Getty Images)
NARA, JAPAN - MAY 11:  A newly born deerlet is seen at Rokuen, a deer shelter on May 11, 2014 in Nara, Japan. (Photo by The Asahi Shimbun via Getty Images)
(Photo credit: Getty Images)
TOKYO - JUNE 24: A baby Fennec is seen at Sunshine International Aquarium on June 24, 2009 in Tokyo, Japan. The small nocturnal fox babies were born on May 17 and opened to the public from June 20 attracting many visitors to the Aquarium. (Photo by Junko Kimura/Getty Images)
XI AN, CHINA - SEPTEMBER 02:  A newborn female giant panda is seen at Shaanxi Province Rare Wildlife Rescue and Breeding Research Center on September 2, 2013 in Xi An, China. 8-year-old giant panda Xin Xin gave birth to the baby on July 18 after being artificially inseminated. (Photo by F.Kingi/ChinaFotoPress via Getty Images)
GREAT BRITAIN - APRIL 17: Lambs in the Cotswolds, Oxfordshire, United Kingdom, UK. (Photo by Tim Graham/Getty Images)
(Photo credit: Shutterstock/Natalia Melnychuk)
(Photo credit: Shutterstock)
FUKUOKA, JAPAN - NOVEMBER 05: Newly born Asian short-clawed otters are seen at the Fukuoka Municipal Zoo on November 5, 2013 in Fukuoka, Japan. The otters were born on August 5. (Photo by The Asahi Shimbun via Getty Images)
A five-month-old still nameless bear explores its enclosure with its mother Huanca on February 12, 2014 at the zoo in Duisburg. (Photo credit: ROLAND WEIHRAUCH/AFP/Getty Images)
(photo credit: Maureen P. Sullivan)
A one-month-old jaguar cub looks out from a bucket at the Leningradsky Zoo in Saint Petersburg on April 15, 2015. (Photo credit:  OLGA MALTSEVA/AFP/Getty Images)
Nine day old baby chimpanzee Deyo sits on the back of it's mother Lady at the 'ZOOM' Zoo in Gelsenkirchen, western Germany, on March 19, 2015. (Photo credit: ROLAND WEIHRAUCH/AFP/Getty Images)
This photo taken on December 28, 2014 shows a red-faced macaque baby monkey playing in its box at a zoo in Hangzhou, in eastern China's Hangzhou province. The baby monkey, born some two months ago, quickly became popular for its restless movements that resembled a gymnast, local media reported.  (Photo credit: STR/AFP/Getty Images)
Up Next

Of course, once the cub started to outgrow his domestic digs, he was relocated to a zoo, and eventually to a sanctuary. Today, he is a fully grown and glorious lion — a far cry from the Teddy bear delivered to Mendis’s home, although he admits the lion never forgot his foster family. Mendis still visits the cat, who lets the man pet him through the bars of his cage.

Lions might reject or abandon their cubs for any number of reasons, say veterinarians. The mother might not have enough milk, she might favor stronger cubs, or in rare instances she might reject a baby that’s had too much human handling.