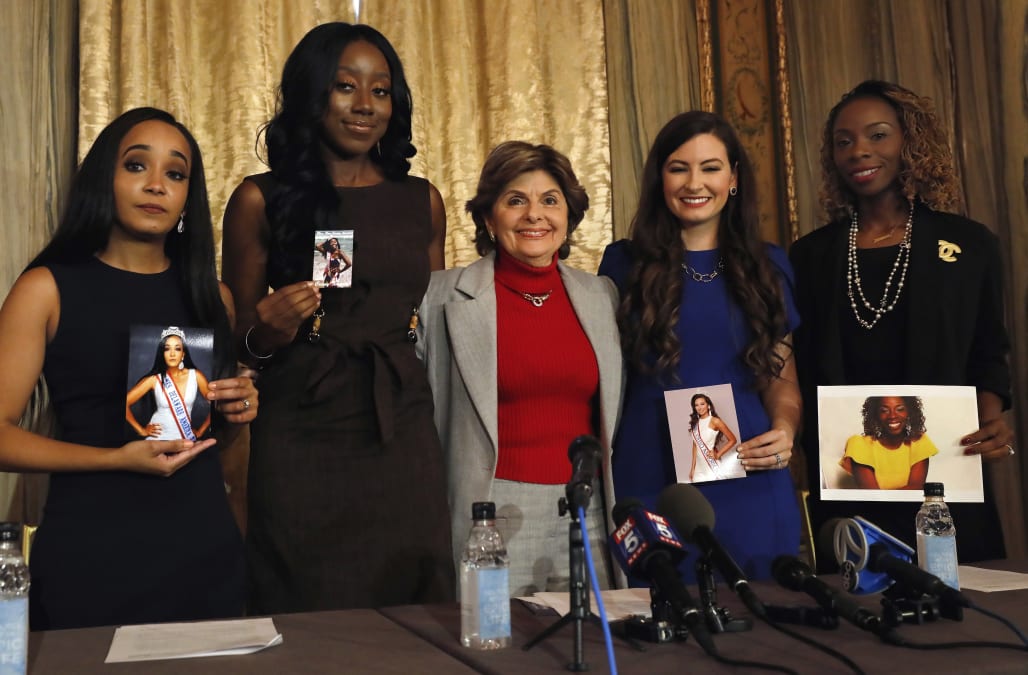 The co-founder of the Mrs. America beauty pageant has been accused by several of this year’s contestants of making demeaning and racially insensitive comments, including using a racial slur and suggesting that black men are “drug dealers” and “black women need to stop having babies with four baby daddies.”

The contestants, who were accompanied by prominent women’s rights lawyer Gloria Allred, said Marmel had approached a group of four African-American women at the event — three of whom spoke Monday — and began talking about what he had done for black people over the course of his career, including involvement in the annual American Black Achievement awards TV show.

During that conversation, Marmel used the n-word at least twice, the women said. Once was when describing the owners of Ebony magazine, who Marmel claimed to know and whom he described as “the most racist people he ever met because they all used the term n****r freely with each other,” NBC News reported, quoting the contestants.

The women alleged that Marmel said it was fine for him to use the term because the Ebony owners referred to him as “brother,” NBC said.

Brandy Palacios, the current Mrs. Missouri, claimed Marmel then put his arm next to hers “in order to compare skin color.”

Marmel used the racial slur again when he recounted his time as a baseball player in the 1950s and seeing signs belittling Jews and African-Americans in the crowd.

Marmel, who is Jewish, has since slammed most of the women’s statements as “ugly,” “false” and taken out of context. However, he confirmed that he had used the slur to describe one of these disparaging signs.

“For them to twist that into me using that slur as some sort of epithet is disgusting and says something about them,” he told The Guardian.

According to the women, Marmel said in the same conversation that “black women need to stop having babies with four baby daddies and all black men are in jail because they need to stop selling drugs and killing each other.”

Timpson claimed she’d had a conversation with Marmel a few days prior to the party in which he’d lambasted Colin Kaepernick, the former NFL player who knelt during the national anthem to protest police brutality, as an “asshole who ... needs to stop disrespecting my flag.”

When Timpson countered that she did not think Kaepernick was disrespecting the flag, “David changed the subject and said, ‘Well, you people need to stop killing each other, we need people to bring up the black community,’” she recalled, according to The Guardian.

“He told me that ‘you black women need to stop having babies and having four baby daddies, your men are drug dealers, incarcerated, in jail, you are on welfare and killing each other,’” she continued.

The four women are seeking an apology from Marmel

Allred, the women’s rights attorney, said on Monday that the four contestants  ― Timpson, Palacios, Kimberly Phillips and Jeri Ward ― had “no plans” to file a lawsuit.

Instead, the women were seeking an apology from Marmel and want him to undergo sensitivity training focused on the issues of racial bias and stereotypes.

″[The four women] feel it is their duty to share what they allege was their experience because they do not want next year’s contestants to be subjected to what they consider to be racially offensive and demeaning comments which have hurt them and caused them so much pain,” said Allred, according to The Associated Press.

Marmel told NBC News on Monday that he did have a conversation with the contestants about race during the pre-pageant event last year but that his statements had been “wrongly characterized.”

He said he will neither apologize nor undergo racial sensitivity training.

“Based upon my career and what I’ve done for the African American community, does it sound like I need sensitivity training?” he told The Guardian.