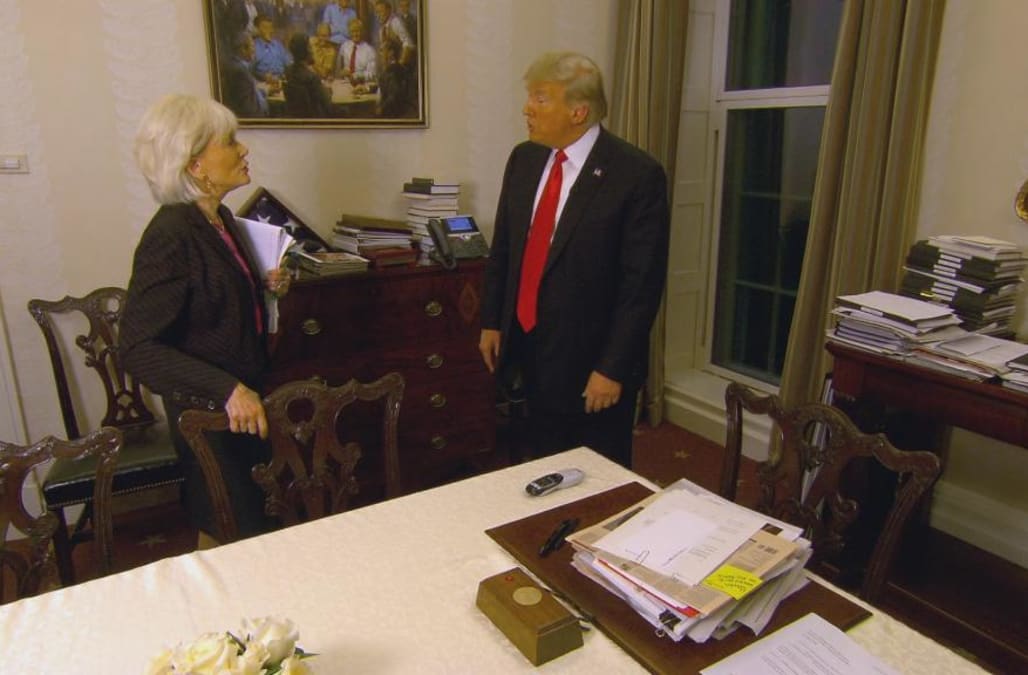 President Donald Trump has an unusual portrait hanging in the White House.

Sharp-eyed viewers of his strange “60 Minutes” interview on Sunday night noticed a portrait on the wall of Trump sitting at a table with other former Republican presidents, including Abraham Lincoln, Ronald Reagan and Richard M. Nixon:

Now on 60 Minutes: There's less than a month until the mid-term elections. Hear what President Trump has to say about some of the issues that will likely be motivating voters at the ballot. pic.twitter.com/4WYnh3t0hy

The portrait is one of a number of presidential images created by Andy Thomas, who has painted both Democrats and Republicans. He told Time earlier this year that he considers himself an independent who supported both Reagan and former President Bill Clinton.

Thomas said Trump was “outside the norm,” which made him an interesting subject:

“Is he going to end up going in history as a great Republican or an abnormality or something? So it’s interesting. I just put him at the table, more or less the center of attention. We’ll let history decide. Or let the people decide. It’s not up to me.”

Thomas told The Daily Beast that Rep. Darrell Issa (R-Calif.) gave the portrait to Trump. The president later made a “real gracious call” to say how much he liked the portrait.

“He was very complimentary,” Thomas said. “He made a comment that he’d seen a lot of paintings of himself and he rarely liked them.”

oh my god, it's hanging in the white house pic.twitter.com/wrq8eo7Bvx

Lincoln is quietly changing his party affiliation in his grave. pic.twitter.com/cjn0V6WomN

Hang it next to the velvet Elvis and dogs playing poker — at least until the spirits of the dead presidents burn Trumps face off the canvas.

Read This: "Trump Hangs ‘Tacky’ Fantasy Painting of Himself With GOP Presidents in White House"
This remind me the dogs paying poker. https://t.co/zy0Bj9Aj5g

All @realDonaldTrump needs now is a velvet Elvis portrait to hang up next to it. #tasteless

I was thinking it would be dogs playing poker on one of those velvet pictures with trump cheating ! https://t.co/yTJk2AFhnI

I hope it’s Trump with the poker playing dogs. pic.twitter.com/PzWagGYGLF

The "Dogs Playing Poker" painting is on the opposite wall.
Only the bulldog slipping the ace to another dog has been replaced by Trump. https://t.co/idCG61lqN7