What you need to know about the 'polio-like' illness popping up around the U.S. 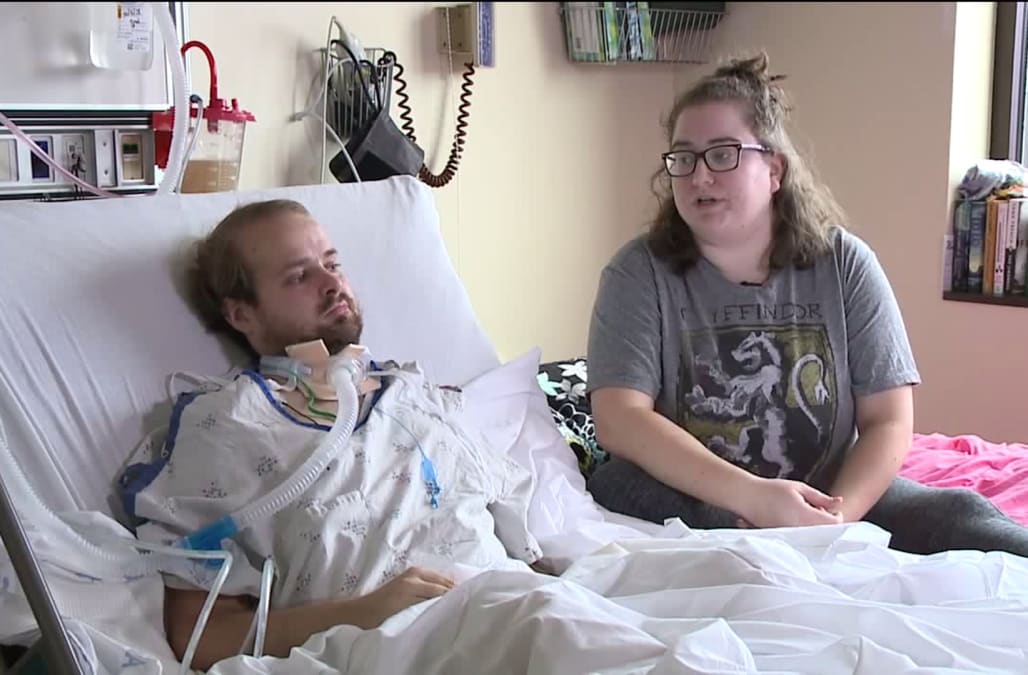 A rapidly progressing “polio-like” illness is leaving children in numerous states paralyzed – and experts aren’t sure what’s causing the kids to fall ill.

Cases of AFM have recently been reported in at least five states: Minnesota, Washington, Illinois, Colorado and Pennsylvania.

The exact cause of AFM is unknown — it may be a new virus that some children do not have enough immunity to combat and therefore have a bad reaction where the nervous system fails, or the virus attacks the spinal cord directly.

“The CDC found evidence of enterovirus D68 in respiratory samples in approximately 20% of patients affected, and other viruses in another 20%, though in the majority of cases a trigger was not identified,” Assistant Professor of Neurology at Columbia University Medical Center and neuroinfectious disease expert Dr. Kiran Thakur told The News. “Most patients presented with an acute febrile illness preceding the onset of weakness, so we think an infection triggered AFM, though we often cannot prove this by lab testing.”

The CDC estimates there are fewer than 1 million cases of AFM each year, with 362 cases identified in the U.S. since 2014.

The timeline from the onset of symptoms to loss of motor function is short.

“It shows with an upper respiratory infection with quick onset of a fever and paralysis,” Pardo said.

The disease rapidly progresses within 24 hours. Patients might begin to feel weak and have difficulty breathing. Paralysis of the limbs begins to set in.

10 subtle signs of disease your feet can reveal

It could be: Thyroid problems, especially if moisturizer doesn’t help. When the thyroid gland (the butterfly-shaped gland in the base of your neck) goes on the fritz, it doesn’t properly produce thyroid hormones, which control metabolic rate, blood pressure, tissue growth, and skeletal and nervous system development. “Thyroid problems cause severe dryness of the skin,” says Marlene Reid, DPM, a foot specialist in Naperville, Illinois. “When we see cracking on the feet, or if moisturizer doesn’t improve dryness over a few days, we usually refer patients to their primary doctor to make sure their thyroids are OK.” Brittle toenails can also signal thyroid complications. Don't miss these other 13 silent signs of a thyroid problem.

It could be: Arterial disease. If the fuzz on your toes suddenly disappears, it could signal poor blood circulation caused by peripheral arterial disease (PAD). “Signs of PAD can include decreased hair growth on the feet and ankles, purplish toes, and thin or shiny skin,” says Suzanne Fuchs, DPM, a podiatric surgeon at North Shore University Hospital in New York. A buildup of plaque in the leg arteries, PAD affects about 8 million Americans. Symptoms are subtle, but doctors can check for a healthy pulse in the foot or spot PAD on an X-ray. “If I take an X-ray of a broken foot, and I see a hardening of the arteries, 99 percent of the time, the same thing is happening in the heart blood vessels,” says Gary A. Pichney, DPM, a podiatric surgeon of The Institute for Foot and Ankle Reconstruction at Mercy Medical Center. (These 11 tests detect silent heart diseases.)

It could be: Diabetes. Uncontrolled glucose levels can damage nerves and cause poor circulation, so blood doesn’t reach the feet. When blood doesn’t get to a wound caused by, say, irritating shoes, the skin doesn’t heal properly. “Many, many people with diabetes are diagnosed first because of foot problems,” says Reid. Other signs of diabetes may include tingling or numbness of the feet. Ask your doctor about getting your blood sugar levels tested. Memorize these 12 foot care tips you should follow if you have diabetes.

It could be: What you ate. Gorged on wine and steak? The painful aftermath could be gout, a type of arthritis that usually affects the joint of the big toe. (Here are some natural remedies for the pain and swelling.) Foods high in purine, a chemical compound found in red meats, fish, and certain alcohol, can trigger an attack by raising levels of uric acid in the body. Uric acid is normally excreted through urine, but is overproduced or under-excreted in some people. “You’ll see the deposition of the uric acid in the joint, most commonly the big toe or the ankle,” says Bob Baravarian, DPM, a podiatric foot and ankle specialist at Providence Saint John's Health Center in Santa Monica, California. “The patient will wake up with a hard, red, swollen joint. It’s extremely painful.” A doctor may prescribe anti-inflammatory drugs for short-term relief and suggest a low-purine diet for long-term prevention. Whether you have gout or not, learn how foot doctors prevent foot problems when wearing sandals.

Tiny, red lines under the toenail

It could be: A heart infection. Red streaks underneath the toenails or fingernails could be broken blood vessels known as splinter hemorrhages. These occur when small blood clots damage the tiny capillaries under the nails. They can signal endocarditis, an infection of the heart’s inner lining. People who have an existing heart condition, have received a pacemaker, or who have chronically suppressed immune systems (such as cancer patients receiving chemotherapy, HIV patients, and diabetes patients) are at higher risk of developing endocarditis. The infection can result in heart failure if left untreated. If you notice splinter hemorrhages on your toenails or fingernails, and haven’t experienced any recent trauma to the nail, see your doctor to check your heart and blood circulation. Learn what else your natural nail color says about your health.

It could be: Lung cancer or heart disease. Another symptom that appears in both toes and fingers, clubbing is often associated with lung cancer, chronic lung infection, heart disease, or intestinal disease. Lung cancer and heart disease decrease vascular resistance, which means blood flow to the small arteries in the toenails and fingertips will increase. Tissue swells and results in the “clubbed” appearance (rounder, wider fingers and toes). Though patients are typically aware they have a disease that is causing the clubbing, it’s best to get checked if you see any abnormalities. Don't ignore these other silent signs of major health problems.

It could be: Psoriasis. If you find tiny holes, grooves, or ridges in your toenails, you may have nail psoriasis. Though most people who experience nail psoriasis also have skin psoriasis (an autoimmune disease that makes skin patchy and irritated), 5 percent of people with nail psoriasis aren’t affected elsewhere. “If you’ve never been diagnosed with psoriasis, but your toenails have little pits in them, you should get them checked out,” says Pichney. Other symptoms include white patches and horizontal lines across the nails. To treat psoriasis, your doctor may prescribe topical creams or steroids to be injected under the nail. Learn more about the skin care routine dermatologists recommend for psoriasis.

It could be: Anemia or lupus. Do you have a depression in the toenail deep enough to hold a water droplet? Also known as koilonychias, spoon-shaped toenails or fingernails can indicate iron deficiency, as well as hemochromatosis (overproduction of iron), Raynaud’s disease (which affects blood supply to the fingers and toes), and sometimes lupus (an autoimmune disease in which the body’s immune system attacks cells, tissues, and organs). Spooned nails occasionally appear in infants, but normalize in the first few years of life. If you notice spooning, contact your physician, who will administer a blood test to identify the exact cause. Check out these other things your nails reveal about your health.

A straight line under your toenails

It could be: Skin cancer. A dark, vertical line underneath a toenail could be acral lentiginous melanoma, or hidden melanoma—a form of the skin cancer that appears on obscure body parts. (Other hidden melanomas include eye melanoma and mouth melanoma.) “It will be a black line from the base of your nail to the end of the nail,” says Pichney. “It should be seen by a podiatrist or dermatologist. You want to make sure it’s not fungus, which is usually yellow brown and sporadic throughout the whole nail.”  Although only 5 percent of all diagnosed melanoma cases are the hidden kind, hidden melanoma is the most common type in dark-skinned people. Here are other skin cancer symptoms that aren't on your skin.

It could be: Nerve damage. “Most high-arched feet are associated with some form of underlying neuromuscular condition,” says Pichney. “If someone has thinning of the arch muscles in the foot, it could be an indication of a neurological condition called Charcot-Marie-Tooth (CMT).” An inherited disorder that damages the peripheral nerves (those outside the brain and spinal cords), CMT can also cause changes in gait, numbness in the feet, difficulty balancing, loss of muscles in the lower legs, and later on, similar symptoms in the arms and hands. See your doctor if you notice abnormalities. “For anything that’s different or changes when it comes to the foot, see your podiatrist right away,” says Reid. Also watch out for these sneaky ways your feet can mess with your sleep.

In a study at Johns Hopkins, Pardo noted some patients had lost feeling in all four limbs in under six hours.

Patients often remain in intensive care for weeks after acquiring AFM and many will require mechanical ventilation.

“A small percentage have some recovery, but patients are left with severe neurological disability or paralysis,” Pardo said.

Pardo emphasized the short timeline between the onset of symptoms and the need to get medical care immediately. Patients may be given steroids or an IV, but so far there have been no proven treatments for the illness.

“Earlier recognition of the condition is essential for us to provide care and support for the patient, including monitoring for symptoms of respiratory involvement. Early supportive treatment can save lives.” Thakur said.

Families of those with AFM can find resources and information from The Transverse Myelitis Association (TMA).