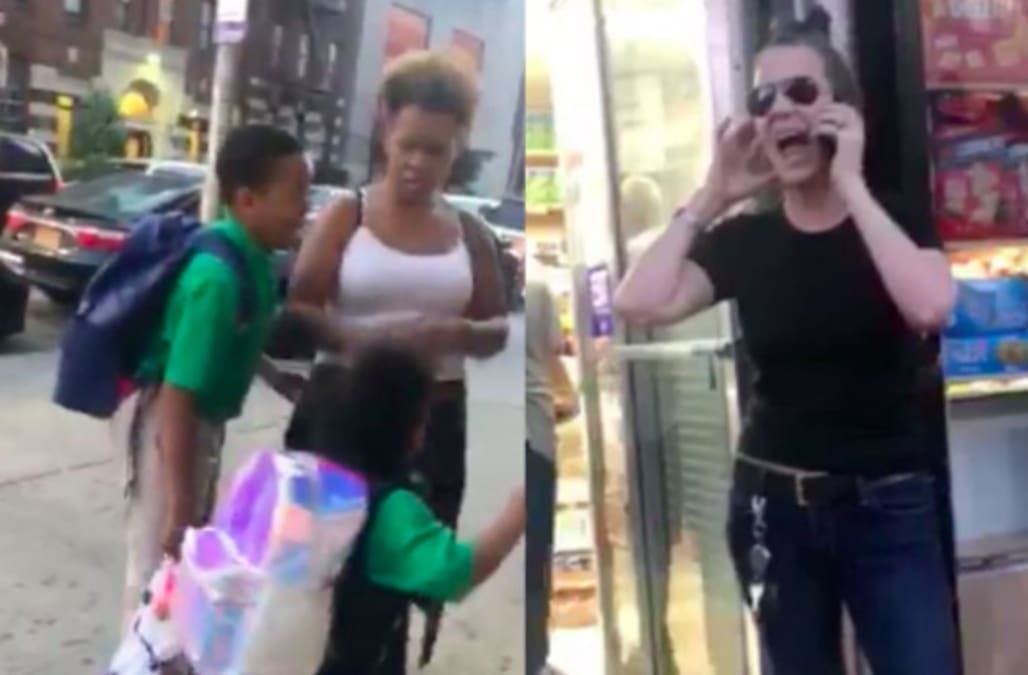 A woman who called the police on a 9-year-old boy accusing him of sexual assault has earned the nickname, “Corner Store Caroline.”

On Wednesday, Facebook user Jason Stovetop Littlejohn shared a video of the ensuing argument, reportedly outside the Sahara Deli in Flatbush, N.Y. “Meet Cornerstore Caroline. White Woman calls police on a kid, saying he sexually assaulted her,” he wrote. “As I walked up I noticed the argument, apparently, the kid brushed up against her and she said he touched her and decided to call police on a nine-year-old child. As you can see the kid is crying and the mom is upset.”

“I want the cops here right now,” the woman, identified by the New York Post as Teresa Sue Klein of Flatbush, Brooklyn, says to the 911 operator. “The son grabbed my a**” She also offers to “submit the security tapes for evidence.”

The boy and presumably his sister, cry and wail with fear while standing next to their mother, as a crowd of people gathers in defense of the family. “I was just sexually assaulted by a child,” yells the woman into the angry crowd.

“Are you seriously calling the police?” says a female passerby. “Go away. What is your problem? I’m calling you out.”

Klein responds, “I am a police officer. No, white lady, I will not [go away].” According to Heavy, she was quoting the boy’s mother, who allegedly identified herself as a cop.

Littlejohn did not return Yahoo Lifestyle’s request for comment. On Friday, Pix11 journalist Andrew Ramos tweeted a surveillance video from the store, depicting the boy walking by the woman unaware of her presence, with both his hands in plain view. His oversized backpack appears to have made contact with the woman, who becomes visibly upset. After exchanging heated words with the boy’s mother, she whips out her phone and starts dialing.

The New York Police Department tells Yahoo Lifestyle that no related complaint reports are filed, although per Pix11, officers did respond after the crowd had dispersed. Yahoo Lifestyle could not reach a representative of Sahara Deli for comment, however, the owner told Pix11, “the woman has a history of being “unwell.” Heavy also reported that Klein, of Missouri, studied sociology at the University of Missouri and is a former actress and performer.

Video completely vindicates the child. Deli owner told me the woman has a history of being “unwell.”

Also – despite many thinking she was bluffing, she actually did call 911 & cops responded to the scene 17 minutes later.

Report was never filed as everyone left.

On Friday, a Pix 11 news crew visited Klein’s apartment, however, she refused to speak, instead calling 911 on the reporters.

UPDATE: Spoke to the woman who called police on a child. Her name is Theresa (the internet has dubbed her #cornerstorecaroline )

She called the cops on me and another reporter. @PIX11Newspic.twitter.com/ugmnUX3cqf

And now the NYPD has arrived to the woman’s - who the internet has dubbed #cornerstorecaroline - home after she claimed me and another reporter were harassing her and threatening her with violence. @PIX11Newspic.twitter.com/9tAFA5qp8j