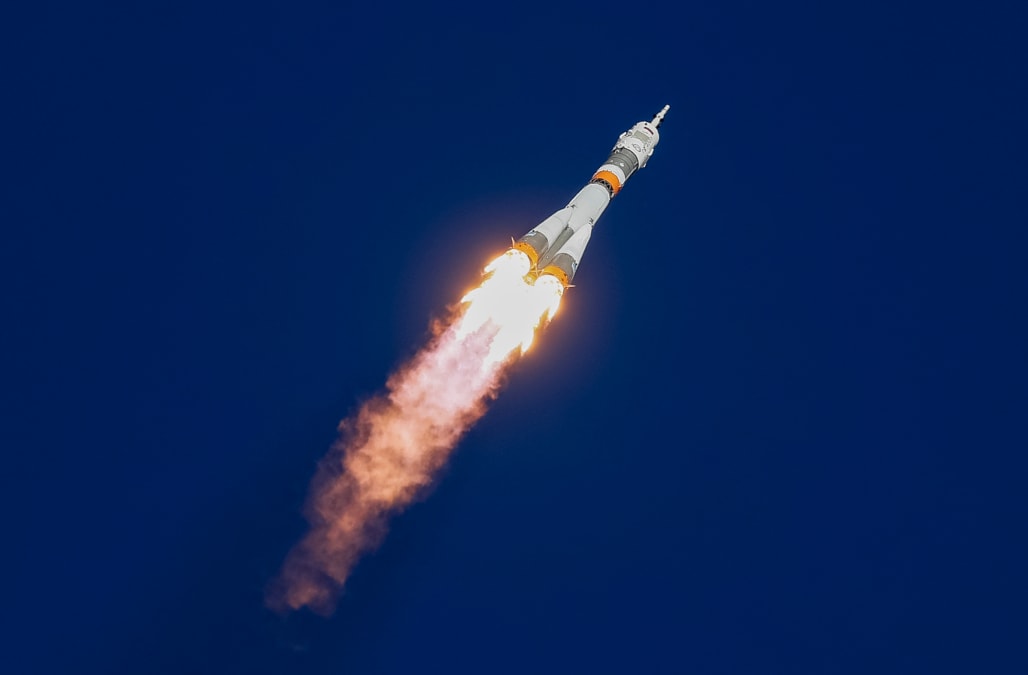 BAIKONUR COSMODROME, Kazakhstan, Oct 11 (Reuters) - A booster rocket carrying a Soyuz spacecraft with a Russian and U.S. astronaut on board headed for the International Space Station failed mid-air on Thursday, forcing the crew to make an emergency landing.

The rocket was carrying U.S. astronaut Nick Hague and Russian cosmonaut Alexei Ovchinin. Footage from inside the Soyuz showed the two men being shaken around at the moment the failure occurred, with their arms and legs flailing.

International Space Station
IN SPACE - OCTOBER 7: (EDITORIAL USE ONLY) In this handout photo provided by the European Space Agency (ESA), German ESA astronaut Alexander Gerst takes a photo during his spacewalk, whilst aboard the International Space Station (ISS) on October 7, 2014 in Space. Gerst returned to earth on November 10, 2014 after spending six months on the International Space Station completing an extensive scientific programme, known as the 'Blue Dot' mission (after astronomer Carl Sagan's description of Earth, as seen on a photograph taken by the Voyager probe from six billion kilometres away). (Photo by Alexander Gerst / ESA via Getty Images)
ZHEZKAZGAN, KAZAKHSTAN - MARCH 12: (Alternate crop of #465931716) In this handout provided by the U.S. National Aeronautics and Space Administration (NASA), the Soyuz TMA-14M spacecraft is seen as it lands with Expedition 42 commander Barry Wilmore of NASA, Alexander Samokutyaev of the Russian Federal Space Agency (Roscosmos) and Elena Serova of Roscosmos March 12, 2015 near the town of Zhezkazgan, Kazakhstan. NASA astronaut Wilmore and Russian cosmonauts Samokutyaev and Serova are returning after nearly six months onboard the International Space Station where they served as members of the Expedition 41 and 42 crews. (Photo by Bill Ingalls/NASA via Getty Images)
STAR CITY, RUSSIA - MARCH 5: In this handout from the In this handout from National Aeronautics and Space Administration or NASA, (L to R) NASA Astronaut Scott Kelly is seen inside a Soyuz simulator at the Gagarin Cosmonaut Training Center (GCTC) March 5, 2015 in Star City, Russia. The three are preparing for launch to the International Space Station (ISS) in the Soyuz TMA-16M spacecraft from the Baikonur Cosmodrome in Kazakhstan on March 28, 2015. As the one-year crew, Kelly and Kornienko will return to Earth on Soyuz TMA-18M in March 2016. (Photo by /Bill Ingalls/NASA via Getty Images)
WALLOPS ISLAND, VA - OCTOBER 28: In this handout provided by National Aeronautics and Space Administration (NASA), The Orbital Sciences Corporation Antares rocket, with the Cygnus spacecraft onboard suffers a catastrophic anomaly moments after launch from the Mid-Atlantic Regional Spaceport Pad 0A at NASA Wallops Flight Facility on October 28, 2014 on Wallops Island, Virginia. William Gerstenmaier, associate administrator of NASA's Human Exploration and Operations Mission Directorate and Michael Suffredini, NASA's International Space Station Program Manager also participated in the press conference via phone. Cygnus was on its way to rendezvous with the space station. The Antares rocket lifted off to start its third resupply mission to the International Space Station, but suffered a catastrophic anomaly shortly after lift off at 6:22 p.m. EDT. (Photo by Joel Kowsky/NASA via Getty Images)
Up Next

The rocket was launched from the Soviet-era cosmodrome in Baikonur, Kazakhstan. A Reuters reporter who observed the launch from around 1 km away said it had gone smoothly in its initial stages and that the failure of the booster rockets must have occurred at higher altitude.

Just as #Soyuz voiceover says “everything looking good” the picture distorts and astronauts clearly shaken by something.... pic.twitter.com/bsw9LFPEV1

The Soyuz capsule has landed back on Earth carrying two crew members. Search and rescue teams are in contact with the crew and are en route to the landing location. Live updates: https://t.co/mzKW5uDsTipic.twitter.com/G3IuAztH6O

Russian news agencies reported that the crew had safely made an emergency landing and were in radio contact and that rescuers were en route to pick them up.

"Search and rescue teams are in the air and heading towards the expected touchdown location for the Soyuz spacecraft returning to Earth carrying two crew members," NASA said in a statement. (

More from Aol.com:
30-year-old doorstop turns out to be a rare meteorite
Weird Goblin planet found on the edge of solar system
Spooky skull-like 'death comet' asteroid to zip past Earth just after Halloween