Eric Holder's rallying cry for Democrats: 'When they go low, we kick 'em' 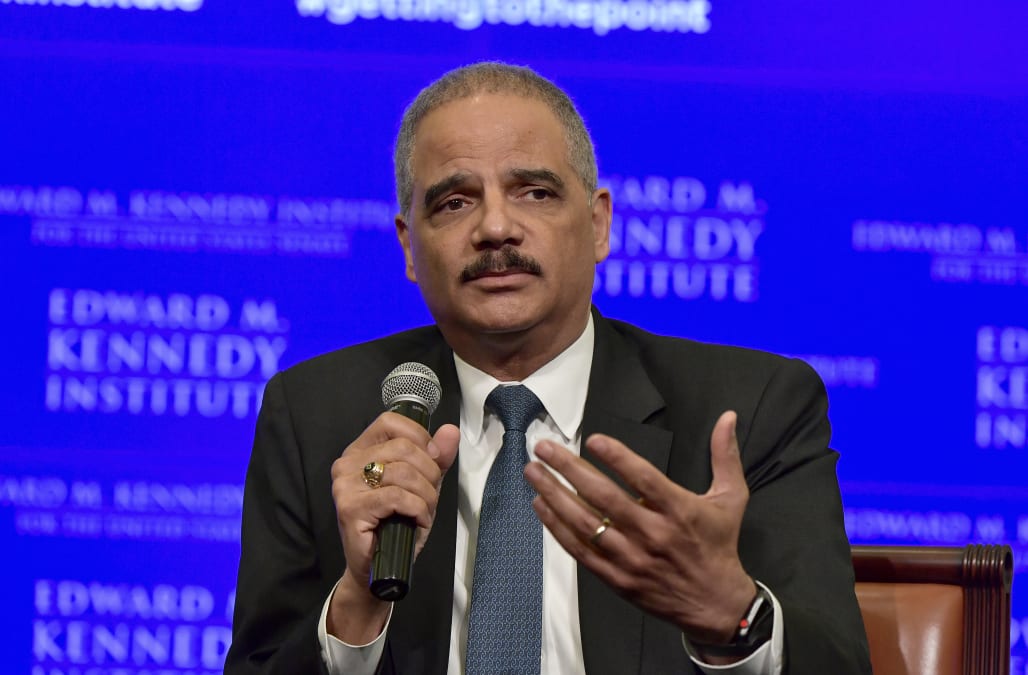 So much for the high road.

A growing number of Democratic politicians have decided that Michelle Obama’s rallying cry, “When they go low, we go high,” won’t cut it in the age of Donald Trump.

“Now, when I say, you know, we kick ’em, I don’t mean we do anything inappropriate,” Holder said. “We don’t do anything illegal, but we got to be tough.”

Attorney General Eric Holder announces he is leaving the Department of Justice while U.S. President Barack Obama looks on.

U.S. Attorney General Eric Holder speaks at the annual convention of the National Association for the Advancement of Colored People (NAACP) in Orlando July 16, 2013. Holder told the major civil rights convention that controversial "Stand Your Ground" self-defense laws that have been adopted in 30 states should be reconsidered.

Eric Holder (L) is sworn-in as US Attorney General by US Vice President Joe Biden (R) as Holder's wife, Sharon (C) holds the Bible during ceremonies on February 3, 2009, at the Justice Department in Washington, DC.

Attorney General Eric Holder makes a separated statement on the unrest after the unarmed 18-year-old Michael Brown was shot by a police officer in Ferguson, Missouri, during a major financial fraud announcement press conference August 21, 2014 at the Justice Department in Washington, DC. Holder spoke on the current situation in Ferguson one day after his visit to the town and met with Browns family, saying the investigation of the shooting will be thorough and will be fair, and Department of Justice stands with the people of Ferguson.

US Attorney General Eric H. Holder is sworn-in during a hearing of the House Judiciary Committee on Capitol Hill May 15, 2013 in Washington, DC. Holder and other members of the Obama administration are being criticized over reports of the Internal Revenue Services'(IRS) scrutiny of conservative organization's tax exemption requests and the subpoena of two months worth of Associated Press journalists' phone records.

U.S. Attorney General Eric Holder speaks during a naturalization ceremony at the U.S. Department of Justice May 27, 2013 in Washington, DC. During the event Citizenship and Immigration Services Director Alejandro Mayorkas administered the Oath of Citizenship to approximately 70 new U.S. citizens.

Eric Holder (L) is sworn in as U.S. Attorney General by U.S. Vice President Joe Biden (R) at the Justice Department in Washington February 3, 2009. Holder's wife Sharon (C) holds the Bible during the swearing in.

U.S. Attorney General Eric Holder is trailed by reporters upon his arrival on Air Force One at Joint Base Andrews in Washington March 6, 2015. Holder had accompanied U.S. President Barack Obama for the day to Columbia, South Carolina.

Attorney General Eric Holder (R) and his wife Sharon Malone attend the unveiling of Holder's official portrait with the artist Simmie Knox (L) at the Dept. of Justice, in Washington, February 27, 2015. Holder, the first African-American attorney general, serving since 2009, will be succeeded by Loretta Lynch, the first African-American woman to hold the position if confirmed by the Senate.

United States Attorney General Eric Holder (L) participates in a selfie with Ju Hyeon Seo (R) during a ceremony for 70 citizenship candidates at the Justice Department in Washington July 22, 2014. Ju was formerly a South Korean citizen.

Holder’s comments came one day after Hillary Clinton made headlines by dismissing calls for political civility with the Republican party.

“You cannot be civil with a political party that wants to destroy what you stand for, what you care about,” Clinton told CNN’s Christiane Amanpour on Tuesday. “That’s why I believe if we are fortunate enough to win back the House and/or the Senate, that’s when civility can start again.”

One of the leading proponents of going toe-to-toe with Trump’s bellicose rhetoric is Stormy Daniels lawyer Michael Avenatti, who has expressed interest in running for president as a Democrat in 2020.

“When they go low, I say, we hit harder,” Avenatti told a crowd in Iowa in August, adding, “I believe that our party, the Democratic Party, must be a party that fights fire with fire.”

Back in March, prospective 2020 presidential candidate Joe Biden upped the ante on aggressive language when he mused that he would have “beat the hell out” of Trump if the two men had attended high school together.

“A guy who ended up becoming our national leader said, ‘I can grab a woman anywhere, and she likes it,'” Biden said at a rally against sexual assault at the University of Miami. “They asked me if I’d like to debate this gentleman, and I said ‘no.’ I said, ‘If I were in high school, I’d take him behind the gym and beat the hell out of him.'”

Biden later apologized for the remark, but Avenatti, who has been locked in a war of words with Donald Trump Jr., has offered to hop into the ring with the president’s son for a three-round, mixed martial arts charity fight. In a tweet posted Tuesday, Avenatti suggested donating proceeds to an anti-sexual violence organization and to the rebuilding effort in Puerto Rico.

This would be for two great causes. I’m in. https://t.co/zo46yhsXCi

President Trump revels in such taunts and regularly recounts Biden’s quip at rallies, bragging that the former vice president would “go down fast and hard, crying all the way.”

While there is no shortage of debate in Democratic circles about how best to take on Trump in the midterm elections and in 2020, the president shows no qualms about endorsing a scorched-earth approach.

At rallies over the past week, Trump has portrayed Democrats as “an angry mob” and “the party of crime.” He told a rally in Minnesota that the “Dems are willing to do anything, to hurt anyone, to get the power they so desperately crave.”

A few days later he was in Council Bluffs, Iowa, where he stood by, smirking, while his audience chanted “lock her up” at the mention of Democratic Sen. Dianne Feinstein.