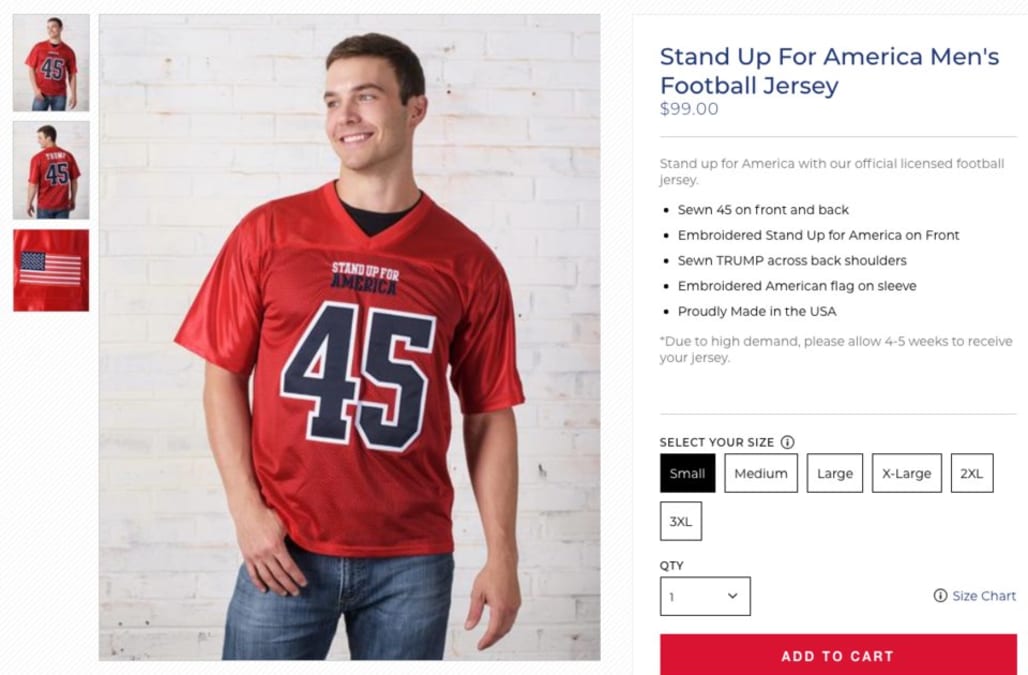 President Donald Trump's campaign store is now selling a "Stand Up For America" jersey as Trump continues to criticize players who protest during the national anthem.

The jersey, which costs $99, feature the number 45 — a reference to Trump's presidency — and "TRUMP" sewn across the back. Both male and female jerseys are available, and they additionally feature an embroidered American flag on the sleeve.

A Trump campaign spokesperson told the New York Post that sales of the jersey over the last month have been "brisk." The jersey, like most official Trump gear, is produced by  Lafayette, Louisiana-based manufacturer Ace Specialties. In the aftermath, critics threatened to boycott Nike — with some people even destroying Nike socks and shoes and posting about it on social media — while others praised the advertisement. The president described the campaign as a bad business decision, tweeting: "What was Nike thinking?"

Kaepernick was the first NFL player to kneel during the national anthem before games in 2016 to protest racial inequality and police brutality. Critics saw the protest as disrespectful to the military, and Trump called for players who protested during the anthem to be fired.

See players who are continuing the protest in 2018:

Kaepernick is embroiled in a lawsuit against the NFL, accusing team owners of colluding to keep him from being signed after he became a free agent in March 2017.

Despite his absence from the NFL, Kaepernick has seen his own boom in jersey sales. In 2016 and 2017, his jersey was one of the most popular in the league. In September, Kaepernick debuted a new jersey, unaffiliated with any NFL team, that read "#IMWITHKAP". Jerseys that were available for preorder sold out within a day.

NOW WATCH: Everything we know about Samsung’s foldable phone