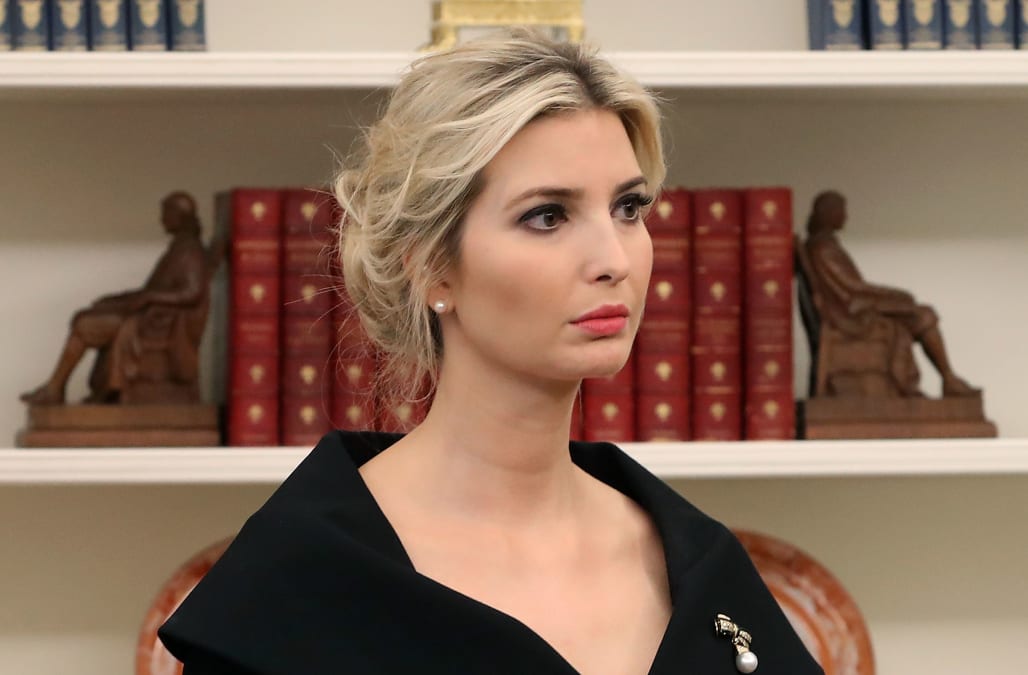 When Nikki Haley announced her impending resignation as US ambassador to the United Nations on Tuesday, people immediately began speculating online that President Donald Trump may nominate his own daughter, Ivanka, to fill the position.

Ivanka quickly shot down the prospect on Tuesday evening, tweeting, "It is an honor to serve in the White House alongside so many great colleagues and I know that the President will nominate a formidable replacement for Ambassador Haley. That replacement will not be me."

Before Ivanka's tweet, even CNN pundits were discussing the possibility of her as UN ambassador as they waited for the president and Haley to officially announce Haley's resignation. She'll remain in her role through the end of the year.

Haley only fueled the speculation when she lavished the first daughter with praise during the announcement, saying "I can't say enough good things about Jared and Ivanka" who "do a lot of things behind the scenes that I wish more people knew about."

The idea spread further on social media, where the likes of conservative author Ann Coulter and MSNBC host Mika Brzezinski discussed the possibility.

Many Twitter users cited a bot that showed Ivanka had started following several defense-related Twitter accounts the day before, which they took as evidence she was getting ready for the job.

And this isn't the first time that the idea of Ambassador Ivanka has been floated.

Last November, The New York Times published a report that said "a scenario circulated" that fall in which Haley would be promoted to secretary of state while Ivanka would be enlisted as UN ambassador.

Later in the afternoon, Trump was asked by reporters about whether he would consider Ivanka for the job. He said he thought his daughter "would be dynamite" but thought he would be accused of nepotism if he nominated her.

The idea of the first daughter taking on such a prominent role has led to questions about whether it would violate the 1967 anti-nepotism statute.

The same questions arose when the president hired Ivanka's husband, Jared Kushner, as a senior White House adviser at the start of his administration. But the issue was dismissed by Department of Justice lawyers who said the law only applies to executive "agency" hires — and the White House isn't an agency.

Legal experts are split about whether the law would apply this time.

For context, the federal anti-nepotism bill became a law in 1967, just six years after then-President John F. Kennedy made his brother Bobby US attorney general.

While many believe this law was created to prevent the president from appointing family members, one of the act's sponsors, Rep. Neal Smith (D-Iowa), said at the time that it was actually created to crack down on corruption in "smaller post offices" of Congress, since many congressmen at the time had their wives on the payroll.

"Some were doing a good job, but… two-thirds of them didn't do any work at all," he told The Des Moines Register, according Time.

Andrew Hessick, a professor at the University of North Carolina School of Law, told Business Insider that he doesn't think the anti-nepotism law applies to the UN position.

Bradley P. Moss, a lawyer who specializes in federal employment and security clearance law, disagrees. He says that the UN ambassador job is a US governmental position, not a job at the United Nations, and therefore within the scope of the anti-nepotism statue.

He says the president will also have a hard time working out a loophole to get around the anti-nepotism statute, like he did last time with Kushner. He pointed out that the specific law that covers White House hires includes language which says, essentially, the president can hire who he wants "without regard to any other provision of law." Moss says the laws concerning the appointment of a UN ambassador does not include that provision, so the anti-nepotism law applies.

"That would probably violate the anti-nepotism statute," he said. "The only exception made applies to a presidential appointment inside the Executive Office of the President (EOP). This is an ambassador under the State Department, not EOP."

SEE ALSO: Nikki Haley resigns as US ambassador to the UN

DON'T MISS: 'I'm not running in 2020': Nikki Haley shoots down speculation of a presidential run as she resigns as US ambassador to the UN

More from Business Insider:
New York Times reveals that its bombshell story on Trump's wealth was made possible by a document his sister submitted to the Senate years ago
Trump reportedly tried to rewrite his father's will but his dad thwarted the effort, saying 'this doesn’t pass the smell test'
New York Times report says Trump engaged in 'outright fraud' to avoid taxes as he inherited father's wealth — worth more than $400 million in today's dollars