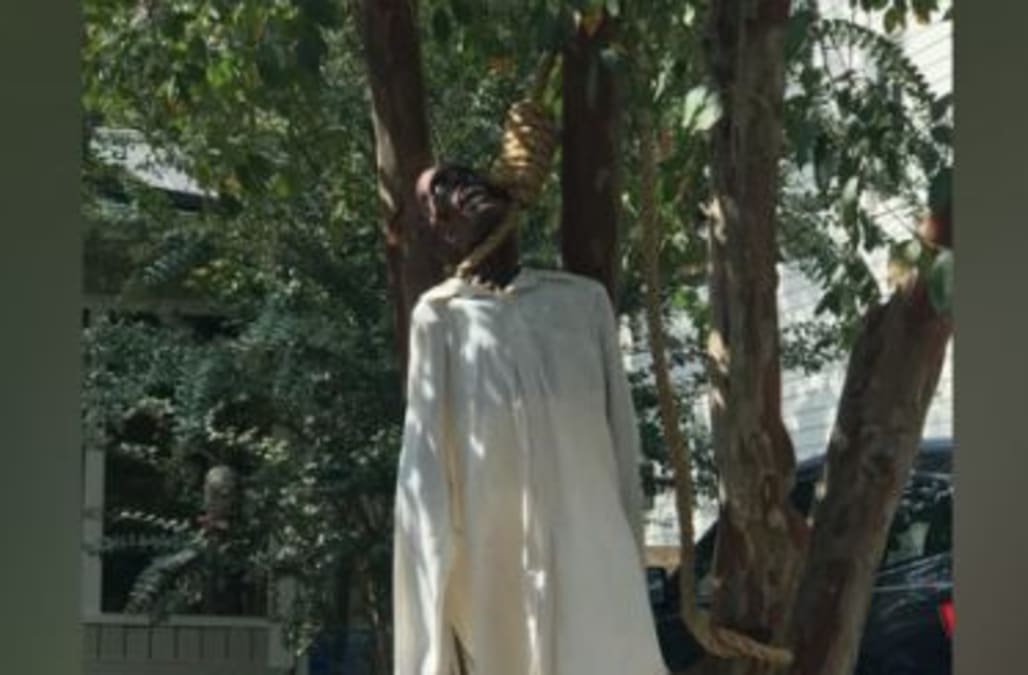 One Southern community is outraged over a “sickening” Halloween display and accusing the homeowners of bigotry and racism.

The controversial display featured what appeared to be a black man hanging from a noose in a tree in a front yard in Homewood, Ala.

Alexus Cumbie of Birmingham, Ala., posted the image on Facebook, stating that it looked like a “fake display of a lynching.”

“A friend of mine was driving through Homewood, Alabama today and witnessed a sickening display in the front lawn of a home,” Cumbie wrote on Facebook over the weekend.

“The owner of this display has refused to take this down,” she continued. “I’m encouraging everyone to share this post until Birmingham news outlets cover this.

“I’m not encouraging violence nor harassment on this homeowner. Let’s not meet bigotry at eye level but also let’s publicly condemn acts of racism in our beloved neighborhoods.”

50+ Halloween movies
The Nightmare before Christmas
BUY IT
Hocus Pocus
BUY IT
Mom's Got A Date With A Vampire
BUY IT
Halloween
BUY IT
Beetlejuice
BUY IT
The Addams Family
BUY IT
Scream
BUY IT
It's the Great Pumpkin, Charlie Brown
BUY IT
Halloweentown
BUY IT
BUY IT
Up Next

The post, which has been shared more than 8,000 times, has sparked outrage from the neighborhood and beyond.

“People are really sick in this world,” another user wrote.

“You can celebrate Halloween however you please, but why ridicule and shame, disrespecting another race — that is beyond stupid,” a commenter added.

The homeowners, Jennifer and Marc Wolfe, claim that they only became aware of the public reaction on Sunday morning and promptly removed the display from the yard.

“We’re not racist. Did I make a mistake? I guess so,” Marc Wolfe told local outlet Alabama.com. “I can see [critics’] point, but we just hung it because that’s how it came. If they want to say we’re insensitive and should have known better, I’ll own up to that.”

The couple told the outlet that when they bought the decorations, they assumed it was a white man who had been badly burned.

It comes after a Halloween display at an Illinois home sparked similar backlash because it appeared to depict a black lynching victim.