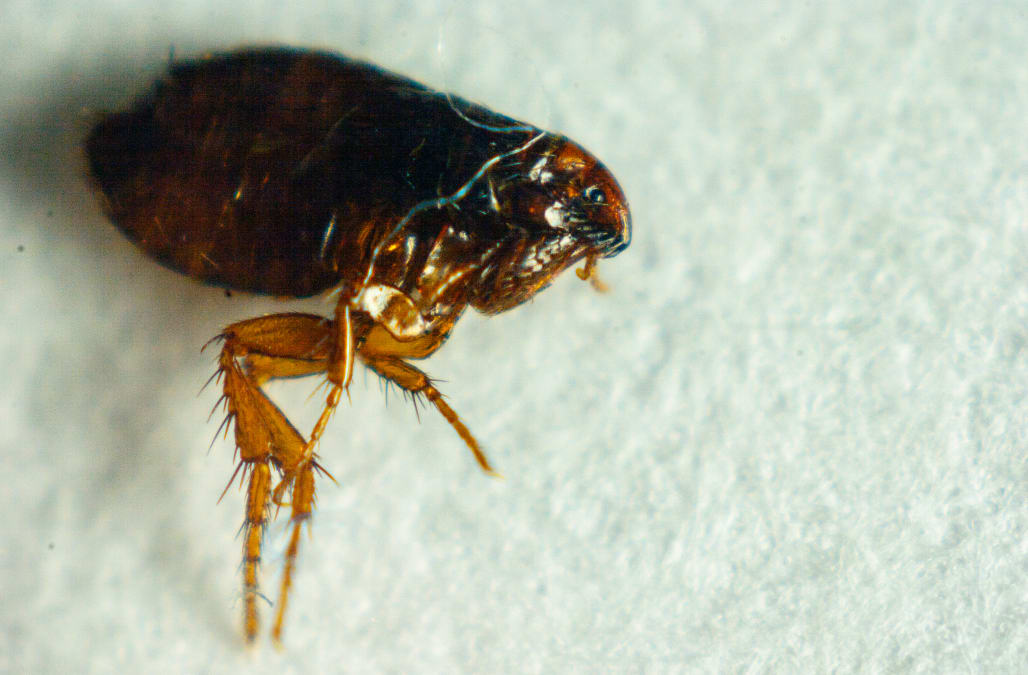 Los Angeles County is warning its residents to look out for fleas that could be carrying typhus after more than 40 cases have been reported in the area in the last several months.

“The Pasadena Public Health Department is reporting epidemic levels of typhus fever this year," the city said in a statement.

Symptoms of typhus include fever and chills, body aches, muscle pain, loss of appetite, nausea, vomiting or rash on the chest, back, arms or legs.

Typhus is typically transferred from infected flea feces when human rub their eyes, cuts or scrapes. The disease cannot be transferred between humans.

Twenty cases have been reported in Pasadena, along with 12 in Long Beach and nine in the rest of Los Angeles, according to NBC.

A breakdown of 9 common bug bites

While bees make most people scream, thrash their arms, and run, the 'lil buzzers aren't really out to get you. In fact, they'd rather not bother with you at all, provided you leave them alone. But if you do get stung, you'll end up with a hive-like pink bump that itches—once it stops throbbing, says Tsippora Shainhouse MD, FAAD, a board-certified dermatologist in Beverly Hills. If the stinger is still visible, try scraping it gently with a credit card to remove it. Don't pinch the stinger with your fingers or tweezers or you could squeeze more venom into your skin, she says. "Treatment can include cool soaks, calamine lotion, oral histamines, like Benadryl, and maybe meat tenderizer," says Dr. Shainhouse. An enzyme in the tenderizer called papain may help break down the substance in venom that cause pain, she explains. "Another theory is that the venom is acidic and when it combines with the alkaline tenderizer, it neutralizes it and reduces the pain," says Dr. Shainhouse. Try a 4:1 ratio of water to meat tenderizer to make a paste. Signs that you're allergic to bee stings can be difficulty breathing, swallowing, vomiting, diarrhea, weakness, confusion, or sweating: Call 911 immediately. Learn the quick fixes for bee stings, bug bites, sunburn and other summer woes.

"The concern with tick bites is that they can be a vector for transmitting other infections, including Lyme disease, erlichiosis, Rocky Mountain spotted fever," says Dr Shainhouse. The trouble is, they are transmitted by different types of ticks and you probably won't see any visible sign of a tick bite the same day it occurs, especially if the tick is in the nymph stage. If a rash develops, it's usually within a few days of the bite. "The classic bulls-eye rash can be single or multiple rings," says Dr. Shainhouse, "and is characteristic of a Borrelia burgdorferi and Borrelia mayonii infection, a spirochete that can be transmitted via a bite from the Ixodes deer tick. It can develop one to two weeks after you are bitten." However, the rash may not appear as a bulls-eye: It could show up solid red or not at all, despite the fact you're infected. You may not even feel sick with this rash, but fevers and headaches could develop. "It must be treated with a 20-day course of oral antibiotics as soon as possible," warns Dr. Shainhouse. Thankfully, not all tick bites automatically mean you'll get Lyme disease. Sometimes, treatment isn't required beyond removing the tick but it is important to show your medical care professional so the tick can be identified and determine if you are at risk for getting an infection.

It seems impossible to sail through summer without a "skeeter" bite, and yes—some people are more attractive to the flying pests than others. According to dermatologist Doris Day, MD, FAAD, Lenox Hill Hospital, New York City, mosquitoes are attracted to people with type O blood, lactic acid, and urea in sweat. Sadly, drinking beer outdoors or just wearing dark clothing can make you more desirable to these biting pests. Besides being a nuisance (that whining noise around your ears is maddening!), the mosquito can transmit infectious diseases. "They carry everything from West Nile virus to Chikungunya to Zika," says Dr. Day. If you get bit, the bug bite will be a small, puffy white bump with a red dot in the middle. It may turn hard and reddish the following day. It feels so good to scratch it but stop it right now: Itching can lead to infection or scarring at the site. Dr Day has some better advice. "Try applying a cold pack, aloe and cortisone cream or gel to help minimize itch." These 8 foods are proven to ward off mosquitoes.

Prevention is the best cure, so treat your pets against fleas. These nasty critters (the fleas, not your pets) cause painful and irritating bites and can even transmit tapeworm. Without treatment, fleas will enjoy the free all-you-eat buffet you and your furry friends provide. They don't fly but wow can they can jump—especially on to your ankles and calves. "Flea bites are usually tiny crusted red bumps on the lower legs," says Valerie Goldburt, MD, PhD, with Advanced Dermatology PC. "The bumps will be very itchy, so treat them with topical cortisone and soothing creams." She recommends keeping the creams the fridge so they're cool. "Or use ice cubes, which slow down nerve transmission and can help with itching," says Dr. Goldburt. If you notice these types of bug bites, talk to your vet about flea control, and call a pest control expert if you suspect flea infestation.

The good news about this spider is its personality is pretty true to its name—they're shy and rarely bite unless provoked. Nonetheless, this spider poses a dangerous threat. Found in the south and central United States, the brown recluse prefers dark, sheltered spaces like basements and sheds. If you disturbed a brown recluse and it bit you, you may not realize it right away. "There's usually a single bite that turns into a red patch with possible blistering," says Dr Goldburt. "Symptoms can vary from slight to extremely intense itching and pain. Some bites can cause necrosis, where the tissue turns dark. This can become a medical emergency where affected tissue needs to be removed. You should see a doctor if you suspect a brown recluse spider bite." Follow these 9 steps to bug-proof your home.

Everyone was on high alert with all the media coverage of bed bugs in hotels a few years back. While you may not hear as much about them these days, you'll still want to know how to recognize signs of a bed bug infestation. "Bedbug bites typically appear as 'breakfast, lunch, and dinner' lesions," notes Joshua Zeichner, MD director of cosmetic and clinical research in Dermatology at Mount Sinai Hospital in New York City. What that means is the bugs typically bite the skin and then move on before biting again, leaving a linear distribution of bites. "The bites typically occur on the arms and the legs, as this is the skin exposed to the bed where the bugs have infested," says Dr. Zeichner. Luckily, bed bug bites will go away on their own after a few days; if the urge to scratch is driving you crazy, he recommends using an over-the-counter hydrocortisone ointment to reduce inflammation and itch. Don't miss the 16 secrets bed bugs don't want you to know.

You're not likely to see these little biters but you'll feel them later. They're not considered insects but actually members of the arachnid family, which includes ticks and spiders. They don't fly but that doesn't stop them from biting you if you're around grassy areas, a golf course, baseball field, or playground. Oddly enough, it's only the baby chiggers that bite—or shall we say teethe—on your skin. They crawl on your clothing until they find an open area of skin and then it's chomping time. "Chigger bites leave behind reddish bumps, with a brighter red dot in the center of each bump. These bumps also resemble pimples or hives," says Angela Lamb, MD, director of the Westside Mount Sinai Dermatology Faculty Practice. To get relief, Dr Lamb recommends taking a cool shower or washing the bite with soap and water. "To relieve the symptoms of itching or burning, I recommend applying cortisone cream or a topical treatment like After Bite, which uses a mix of soothing ingredients to provide itch relief. For kids—and adults with sensitive skin—I recommend using After Bite Kids, which is a gentle, non-stinging cream that also provides instant relief for symptoms of discomfort."

Found in warm dry areas of the southern and western United States, the black widow has a distinctive red hourglass shape on its abdomen. Shy and fond of dark corners, this black beauty delivers a bite that is immediately painful. You'll have swelling and redness at the site and you may be able to see two fang marks. Within eight hours your muscles may become stiff, and you could experience nausea, dizziness, difficulty breathing, rash, itching, and even tremors and leg paralysis. If a child has been bitten, get to the ER quickly as the spiders can be fatal to young ones. You can wash the area with cold water and soap, and then ice for 10 minutes on, 10 minutes off until you get medical attention. Find out the 10 most dangerous bugs to watch out for.

They may be small, but fire ants are highly aggressive and deliver a painful bite. They're resilient too. According to the Washington Post, not even the floodwaters of the recent tropical storm Cindy have deterred them; the colony forms a loose ball and floats until the crew finds dry land. Generally, fire ants are found throughout the southeastern and southwestern United States. Their nests turn up on lawns, in parks, and pastures. "Fire ant stings can be identified by the groups of swollen red spots that appear on the skin and resemble pus-filled pimples. These round spots will often blister at the top shortly after the sting occurs," says Dr Lamb. Treat the bites as you would chiggers: Cool shower, soap and water, and topical treatments like After Bite.

Looking for a natural itch relief?
Up Next