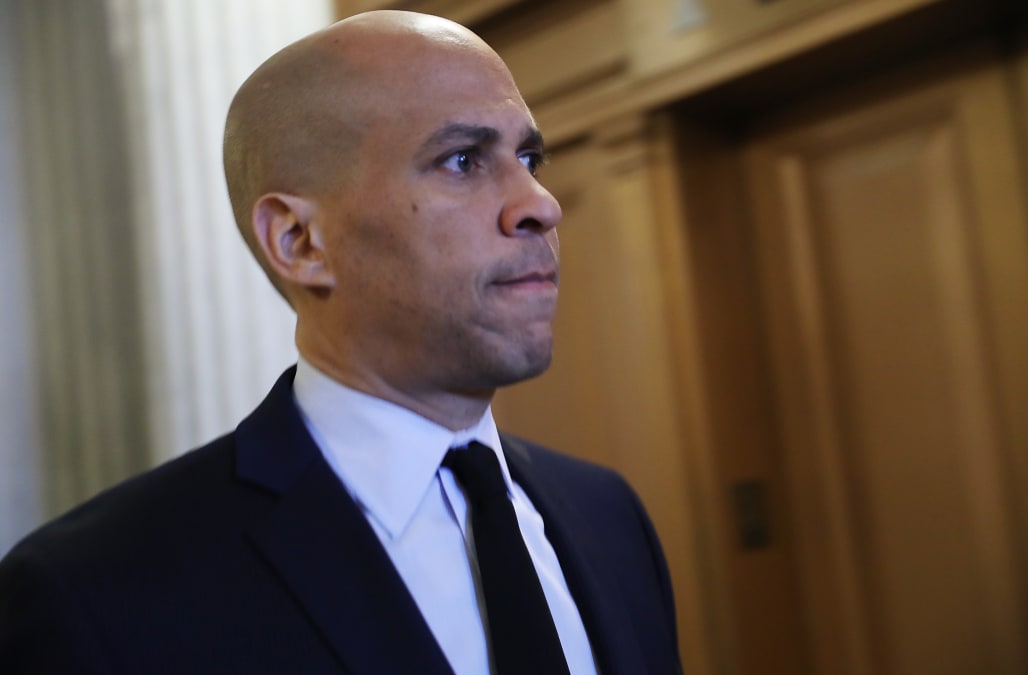 DES MOINES, Iowa — New Jersey Sen. Cory Booker said on Sunday the possibility of impeaching Supreme Court Justice Brett Kavanaugh shouldn’t be off the table if Democrats take one of the houses of Congress in next month’s midterm elections. Kavanaugh was confirmed on Saturday by a narrow vote following a contentious process that included multiple sexual assault allegations.

Other Democrats have raised the possibility of impeaching Kavanaugh over allegations that he committed perjury in his hearing at the Senate Judiciary Committee, on which Booker sits. News accounts have quoted acquaintances who contradict Kavanaugh’s testimony about his behavior as a young man, and evidence has surfaced calling into question some of his assertions about his time in the George W. Bush administration, but Kavanaugh insists he told the truth. Impeachment would require the Democrats to win a House majority and control that chamber’s judiciary committee. The question would then go to trial in the Senate.

“The reality is, right now, Republicans control the House and the Senate, and there’s no way to do even an investigation unless we flip one of the houses. So I think even before you start focusing on questions about his truthfulness before a Senate committee, you’ve got to focus on the urgency of the work over the next 30 days, and that’s where my focus is,” Booker said.

Booker spoke to Yahoo in Iowa, where he is making multiple campaign appearances in support of Democratic congressional candidates. He said he is working to help secure a Democratic majority. After the midterms, Booker said, the party can determine what its priorities should be.

“I think that after the dust settles on the night of the 6th, I think that’s where we start to evaluate … what is the best thing for us to be focusing on in terms of what’s best for America and the American people,” Booker said.

Booker’s emphasis on the midterms echoed a speech he made at the Iowa Democratic Party’s fall gala Saturday night after his arrival in the state was delayed by the Kavanaugh vote on the Senate floor. In those remarks, Booker struck a hopeful note and urged Democrats who are “angry” and “upset” to “stay faithful.” He also cautioned members of the party against being “caught up in a state of sedentary agitation” and urged them “not to wait for the hope, but to be the hope.” In one of his calls to electoral action, Booker referenced comments President Trump made last week mocking one of Kavanaugh’s accusers, Dr. Christine Blasey Ford.

The bar for impeachment is very high, and it has happened to a sitting Supreme Court justice only once in American history. Impeachment first requires a House vote. If a majority of House members vote to impeach, the Senate holds a trial to weigh the charges. Conviction and removal from office requires a 67-vote supermajority in the Senate.

Democrats have a strong chance of taking the House in the midterms. Rep. Jerrold Nadler of New York, who would most likely become chair of the House Judiciary Committee if the Democrats have a majority, has said he supports the idea of investigating Kavanaugh for perjury, which could begin an impeachment process. However, Democrats have much slimmer chances of taking control of the Senate, and there is no way they will come close to 67 seats.

The perjury allegations against Kavanaugh come from three things: his denials of all the sexual assault accusations levied against him, his claims about his youthful drinking and evidence that he lied under oath during prior confirmation hearings.

During his Supreme Court confirmation testimony, which was under penalty of perjury, Kavanaugh said he “never blacked out” while drinking as a young man. Since then, multiple people who knew Kavanaugh in college have come forward to say they witnessed Kavanaugh “stumbling drunk.”

The allegations about previous perjury by Kavanaugh emerged based on emails from his time working on President George W. Bush’s White House staff that were released as part of his Supreme Court confirmation process. Those messages indicate Kavanaugh had received Democratic strategy memos that had been stolen in the early 2000s. In confirmation hearings held in 2004 and 2006 when Kavanaugh was nominated to federal judgeships, he denied receiving those memos.

An FBI investigation into the sexual assault allegations was authorized by the White House after the Republican leadership of the Senate Judiciary Committee requested it. The White House limited the scope of the investigation and insisted that it be completed in seven days; the FBI ultimately finished after five days.

Republicans have called the FBI investigation a thorough exoneration. Booker, who read the FBI’s full report on the probe, said it was unsatisfactory.

“I think the way the FBI was limited in their investigation was a sham. There were so many things even in the handful of interviews they did do that would have motivated investigators to ask more questions, interview more people,” Booker said. “Clearly the FBI was severely constrained in the scope of their investigation in a way that did not honor the courage of the survivors who came forward.”

Booker noted that the FBI did not interview “multiple people” named by one of Kavanaugh’s accusers, Deborah Ramirez, as able to corroborate her claims that Kavanaugh had exposed himself to her at a party when they were both students at Yale. Booker said there were “a number of things that the FBI could have easily investigated to see if he was lying about his past conduct.”

He said he supported further investigation of Kavanaugh.

“If there is conclusory evidence that shows unequivocally that he lied to a Senate committee, that is a crime and he should be held accountable for those criminal acts,” Booker said.

Booker has made campaign appearances around the country during this election cycle. However, Iowa holds unique importance as an early presidential primary state, and this trip was Booker’s first visit to the state during this cycle. Booker’s appearance here fueled speculation he might mount a White House bid in 2020. Yahoo News asked Booker if he would support renominating President Barack Obama’s last Supreme Court pick, Merrick Garland, who was blocked by Republicans. Booker brushed off the question about presidential politics.

“That’s a speculative hypothetical,” Booker said. “I can’t even engage with it. The reality is, I’m the senator from New Jersey. With 30 days before the election, my focus is the work before us.”