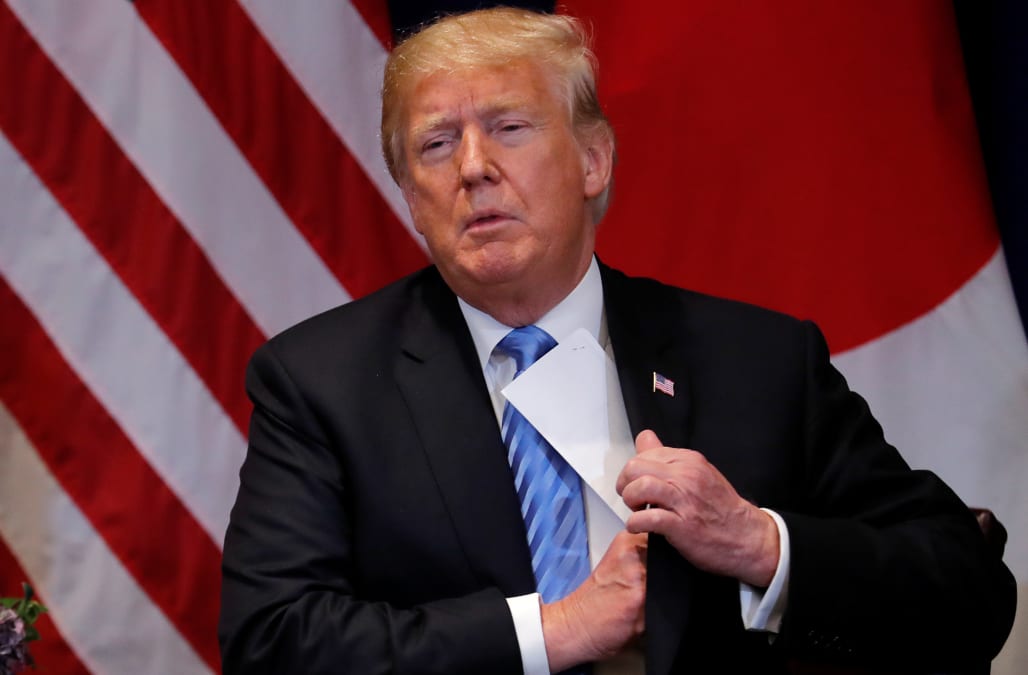 During a press conference, Trump said in regard to Kim, “We have a very good relationship. He likes me. I like him. We get along. He wrote me two of the most beautiful letters.”

“When I showed one of the letters — just one — to Prime Minister [Shinzo] Abe, he said, ‘This is actually a groundbreaking letter. This is a historic letter.’ And it is a historic letter. It’s a beautiful piece of art. And I think we’re going to make a deal,” Trump further noted.

Notably, Bloomberg reports that earlier, “Trump brandished the letter before reporters during the meeting with Abe on the sidelines of the United Nations General Assembly in New York. He said he received an ‘extraordinary letter just yesterday’ from Kim but did not say what the dictator had written.”

Not long after, Trump suggested that the timeframe for North Korea’s denuclearization has been relaxed, commenting, “We’re not playing the time game. If it takes two years, three years, or five months, it doesn’t matter.”

21 photos of North Korea that Kim Jong Un wouldn't want you to see
Day-to-day life in North Korea can be bleak. Sanctions put in place to punish the nation for its nuclear weapons tests have crippled the economy.
The Hermit Kingdom, one of the most closed-off places in the world, has experienced increasingly severe food shortages in recent years.
Childhood in North Korea can be difficult. Many children in rural areas have to work on farms, and forced labor drives much of the country's economic output.
Malnutrition affects a shocking number of North Korean children — roughly 28% of kids under 5 have stunted growth.
Poverty and hunger are most acute in North Korea's countryside. An estimated 41% of the population, or 10.5 million people, are believed to be undernourished.
Xiaolu Chu, a Getty photographer who traveled through North Korea by train in 2015, said he noticed scores of people in rural villages begging for money. He shared some of his photos with Business Insider.
"There are nearly no fat people in North Korea," Chu told Business Insider. "Everyone looks very thin."
But even North Koreans in cities face poor living conditions. Many live in densely packed high-rise apartments and often experience electricity shortages and elevator breakdowns.
And there's not much access to the internet — people make do with a closed-off computer network system accessible in only a handful of places, like this library in Pyongyang.
One of the most telling aspects of North Korean life is its military. The country's leader, Kim Jong Un, loves to show off its military might, holding flashy parades and distributing propaganda photos of vast armies of marching soldiers.
But it's rarer to capture photos that show the flipside of military life. North Korean soldiers are often malnourished or ill because of rigorous training and a lack of food.
As one soldier defected last year, others shot him five times. Surgeons in South Korea then made a shocking discovery as they rushed to treat his wounds: He was riddled with parasites.
The parasitic worms, some of which were 11 inches long, illustrate the poor conditions in North Korea. The country still uses human excrement to fertilize its crops, a practice that can spread parasites.
Defections aren't uncommon, though the number of people who did so dropped by 21% last year, to 1,127.
South Korea attributes the falling number in part to tighter border security. North Korean soldiers are ruthless when they see people escaping — here are bullet holes from when they tried to shoot a defector in November.
Another disturbing aspect of life in North Korea is the country's notorious prison camps, where citizens — some of whom were found to have committed minor infractions that wouldn't be considered crimes in other countries — can face appalling conditions.
Prisoners in these so-called re-education camps are often starved and forced to do hard labor. Some survivors have reported harsh interrogations and even torture. Though there aren't photos of the camps, they're visible on Google Earth.
The international community has long condemned North Korea's human-rights record. The US too has highlighted victims of especially egregious brutality, like Ji Seong-ho, who attended President Donald Trump's State of the Union speech in January.
Ji left his homeland in 2006. He says he crossed thousands of miles on crutches after enduring years of hunger, grievous injuries from falling on train tracks, and torture at the hands of North Korean police.
"I understand you still keep those crutches as a reminder of how far you have come," Trump said during his State of the Union speech, adding: "Seong-ho's story is a testament to the yearning of every human soul to live in freedom."
Today, that freedom is far from reality for many still in Kim's North Korea.
Up Next