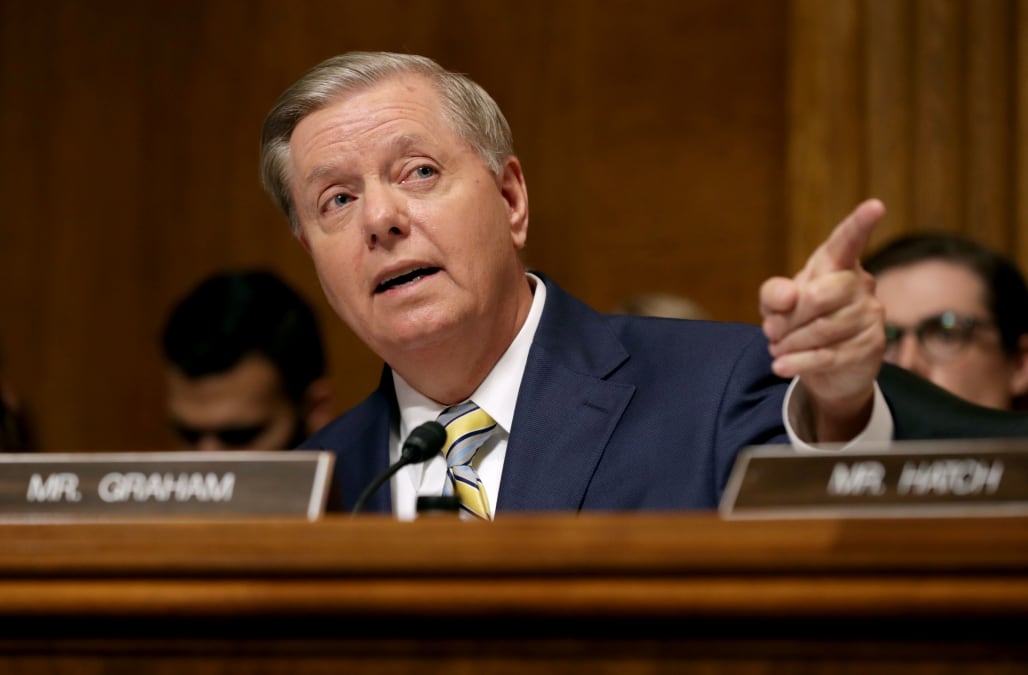 Republican Senator Lindsey Graham on Friday said that if former Vice President Joe Biden runs in 2020 he would be “hard to beat.”

Just prior to the Senate Judiciary Committee’s vote on advancing the nomination of Judge Brett Kavanaugh, Graham commented, “I can’t believe we’re saying this on our side, listen to Joe. But Joe was right a lot. Joe Biden’s a unique guy…He’s a decent guy. If he runs for president he’d be hard to beat.”

The Associated Press reported in early September that Biden has indicated he will make his final decision on 2020 run by January.

For now, Biden is focused on November’s midterm elections.

When asked over the Labor Day weekend what’s at stake in the fast-approaching races, he replied, “Everything. It’s simple: everything.”

RELATED: Members of the Biden family

Members of the Biden family

U.S. Vice President Joe Biden (R) talks with his son, U.S. Army Capt Beau Biden, at Camp Victory on the outskirts of Baghdad July 4, 2009. Biden met U.S. troops preparing to mark their Independence Day holiday on Saturday, on the third day of a visit he has used to urge Iraqi politicians to do more to reconcile rival factions.

U.S. Vice President Joe Biden (L) is joined by his wife Jill Biden (4th L) and their family for remarks at a volunteer project to assemble care kits for U.S. military service members and veterans at a Unite America in Service event at the National Guard Armory in Washington, January 19, 2013. Biden and his family volunteered for the event during the National Day of Service as part of the 57th Presidential Inauguration.

Dr. Jill Biden (C), wife of U.S. Vice President Joe Biden, waves onstage with Biden family members at the Kids Inaugural concert for children and military families, one of the events ahead of the second-term inauguration of U.S. President Barack Obama in Washington January 19, 2013.

U.S. Vice President Joe Biden walks with his sons Beau (L) and Hunter (2nd R) and his wife Jill down Pennsylvania Avenue during the inaugural parade in Washington January 20, 2009.

U.S. Vice President Joe Biden (R) holds hands with his wife Jill along with relatives as they walk on a road named after their late son Joseph 'Beau' Bide in the village of Sojevo on August 17, 2016. Biden said that the United States would remain a 'champion' of an independent Kosovo, but he firmly warned its leaders against the 'cancer' of corruption. On his first visit to Kosovo since 2009 -- the year after it unilaterally declared independence from Serbia -- Biden held talks with President Hashim Thaci and other leaders before a dedication ceremony naming a road after his late son.

US vice president Joe Biden (C) walks with his son in law Howard Krien (L) during a visit to a local food court in Singapore on July 26, 2013. Biden is on a two-day official visit to Singapore after India where officials say he will tackle tensions over the disputed South China Sea 'head on.'

US Vice President Joe Biden (3rd L) and his three grandchildren look at a koala during a visit to Taronga Zoo in Sydney on July 19, 2016. US and Australian troops plan to step up training so they are 'fully prepared' to answer challenges in the Pacific, Biden said amid rising tensions over Beijing's claims in the South China Sea.

Vice President of the United States Joe Biden (C) and family attend the 2016 ESPYS at Microsoft Theater on July 13, 2016 in Los Angeles, California.

Chief Executive Officer of the AFL Gillon McLachlan, President of the MCC Stephen Smith and Chairman of the AFL Mike Fitzpatrick pose for a photograph with US Vice President Joe Biden and his granddaughters during the 2016 AFL Round 17 match between the Carlton Blues and the West Coast Eagles at the Melbourne Cricket Ground on July 17, 2016 in Melbourne, Australia.

PARIS, FRANCE - JUNE 13: Dr. Jill Biden and her grand-daughter Natalie Biden try samples of food as they meet with students and staff during a visit to the Lycee Guillaume Tirel on June 13, 2016 in Paris, France. The college serves as a school for cooking and hotel services.

Vice-President Joe Biden and sons Hunter Biden (L) and Beau Biden walk in the Inaugural Parade January 20, 2009 in Washington, DC. Barack Obama was sworn in as the 44th President of the United States, becoming the first African-American to be elected President of the US.

US Vice President Joe Biden (C) leaves the Church of the Holy Sepulchre with his family on March 9, 2016 during his visit in Jerusalem's Old City.

US Vice President Joe Biden (2nd L) stands with his daughter Ashley Biden (L), his wife Jill Biden (2nd R) and son-in-law Howard Krien (R) after being being presented with a new orchid hybrid plant (pictured C) named 'Joe and Jill Biden' during a visit to the National Orchid Garden in Singapore on July 26, 2013. Biden is on a two-day official visit to Singapore after India where officials say he will tackle tensions over the disputed South China Sea 'head on.'

U.S. Vice President Joe Biden (C) buys an ice-cream at a shop as he tours a Hutong alley with his granddaughter Finnegan Biden (R) and son Hunter Biden in Beijing December 5, 2013.

More from Aol.com:
Michael Bloomberg is weighing a 2020 run as a centrist Democrat
Obama: 'Stakes really are higher' in next election
Advisers say Joe Biden to decide on a 2020 run by January