President Trump tweets his disapproval of the NFL before opening games 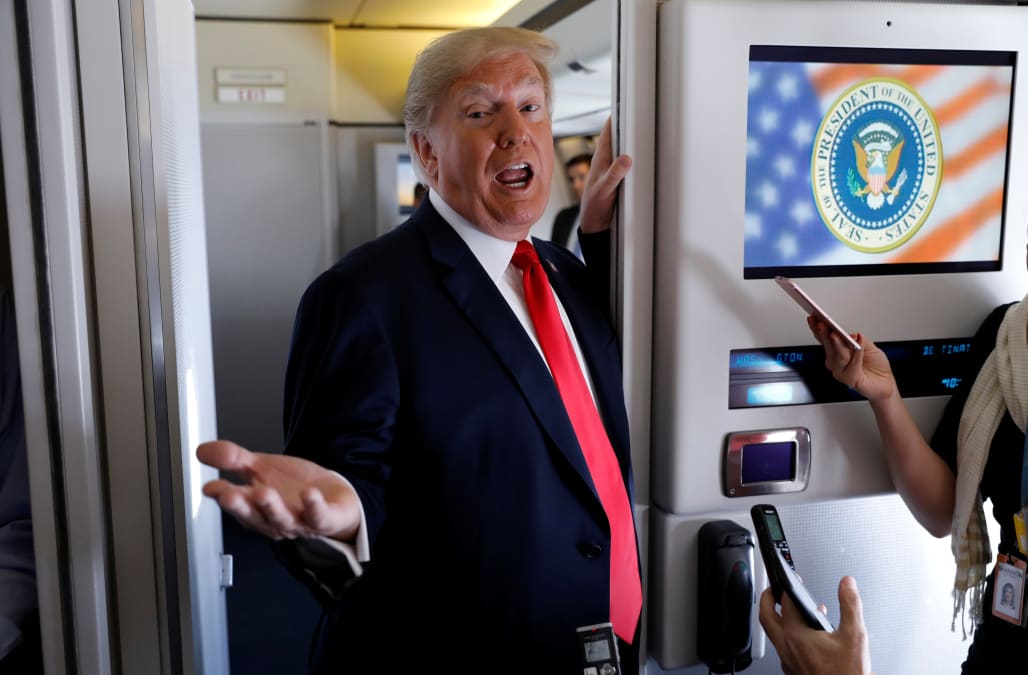 President Donald Trump has tweeted his disapproval of the NFL on Sunday morning before the first full slate of games.

The president has criticized players for their demonstrations protesting social injustice during the national anthem, and the league for not requiring players to be on the sideline at attention when "The Star-Spangled Banner" is played.

He made reference to lower ratings on NBC in Thursday night's season opener in which Super Bowl champion Philadelphia beat Atlanta 18-12.

Wow, NFL first game ratings are way down over an already really bad last year comparison. Viewership declined 13%, the lowest in over a decade. If the players stood proudly for our Flag and Anthem, and it is all shown on broadcast, maybe ratings could come back? Otherwise worse!

Philadelphia Eagles LB Nigel Bradham, one game (conduct policy): Bradham was suspended for an incident in 2016 in which he was charged with assaulting a hotel employee. Bradham was a key playmaker for the Eagles’ championship defense last season and will be missed in the opener against the Falcons.

Cincinnati Bengals LB Vontaze Burfict, four games (PED policy): The least surprising name on this list, Burfict has a history as the league’s dirtiest player and now has a PED suspension on his record. The Bengals continue to put up with him getting in trouble because he’s a good linebacker, and he’ll likely be a big part of their defense when he returns.

Carolina Panthers LB Thomas Davis, four games (PED policy): Davis insisted he did nothing wrong, and the three-time Pro Bowler is now rethinking retirement. He had said 2018 would be his last season but has said after the suspension that he’d like to play in 2019.

New England Patriots WR Julian Edelman, four games (PED policy): Edelman has been Tom Brady’s favorite target, along with Rob Gronkowski, for a long time. The Patriots are somewhat thin at receiver going into the season, and Edelman’s absence certainly will change the offense.

San Francisco 49ers LB Reuben Foster, two games (conduct policy): Foster, a first-round pick last year, played well when healthy. Then there were ugly accusations by an ex-girlfriend, a court case and a two-game suspension. The 49ers patiently waited it out, and will have to wait another two games to get their inside linebacker into the lineup.

Jacksonville Jaguars DE Dante Fowler, one game (conduct policy): Fowler, a former first-round pick, was suspended over a 2017 incident in which he was accused of punching a man. Fowler had eight sacks last season, but the Jaguars have the depth to overcome his absence.

New Orleans Saints RB Mark Ingram, four games (PED policy): Ingram and Alvin Kamara led a great 1-2 punch at running back for the Saints last season. There was not only the suspension but some discord between the team and Ingram this offseason over his contract. It will be interesting to see how he is used upon his return.

Dallas Cowboys DL David Irving, four games (substance abuse policy): Irving has shown flashes of dominance for the Cowboys, and he also has spoken out about the league’s marijuana policy after he was suspended.

Green Bay Packers RB Aaron Jones, two games (substance abuse policy): Jones, expected to compete with Jamaal Williams for the starting tailback spot, was suspended after pleading no contest to a marijuana-related charge. His absence could allow Williams to take control of the Packers’ backfield.

Los Angeles Chargers DL Corey Liuget, four games (PED policy): Liuget has been a consistent force in the middle of the Chargers line for seven years, but he’ll miss the first quarter of the season. That won’t help a defense that struggled to stop the run last season.

Baltimore Ravens CB Jimmy Smith, four games (conduct policy): Smith was suspended for “evidence of threatening and emotionally abusive behaviors by Jimmy toward his former girlfriend,” according to the Ravens. Smith is one of the better cornerbacks in the NFL and will be missed even though the Ravens have good depth in the secondary.

Indianapolis Colts RB Robert Turbin, four games (PED policy): With Frank Gore gone, Turbin might have factored into the thin Colts backfield this season. However, Turbin won’t be around four four games and might be forgotten by the time he returns.

Tampa Bay Buccaneers QB Jameis Winston, three games (conduct policy): This is the most notable suspension in the league. Winston was suspended for an incident in which he was accused of groping an Uber driver. The Buccaneers have a tough schedule to start (at Saints, vs. Eagles, vs. Steelers), and it’s possible that Winston returns to an 0-3 team. An even bigger story will be what the Buccaneers do with him in the future.

"Wow, NFL first game ratings are way down over an already really bad last year comparison," Trump tweeted. "Viewership declined 13%, the lowest in over a decade. If the players stood proudly for our Flag and Anthem, and it is all shown on broadcast, maybe ratings could come back? Otherwise worse!"

The NFL unilaterally passed a policy requiring players to stand at attention for the anthem or to stay in the locker room or in the tunnel under the stands. When that policy met with heavy criticism, it was put on hold while the league and players' association discussed other options. Those discussions are continuing.

More from Aol.com:
Bannon says Trump is facing a 'coup' amid NY Times op-ed controversy
Pence: ‘Disappointing’ to see Obama ‘break with the tradition’ and ‘become so political’
Trump moves to extricate himself from Stormy Daniels deal, lawsuit