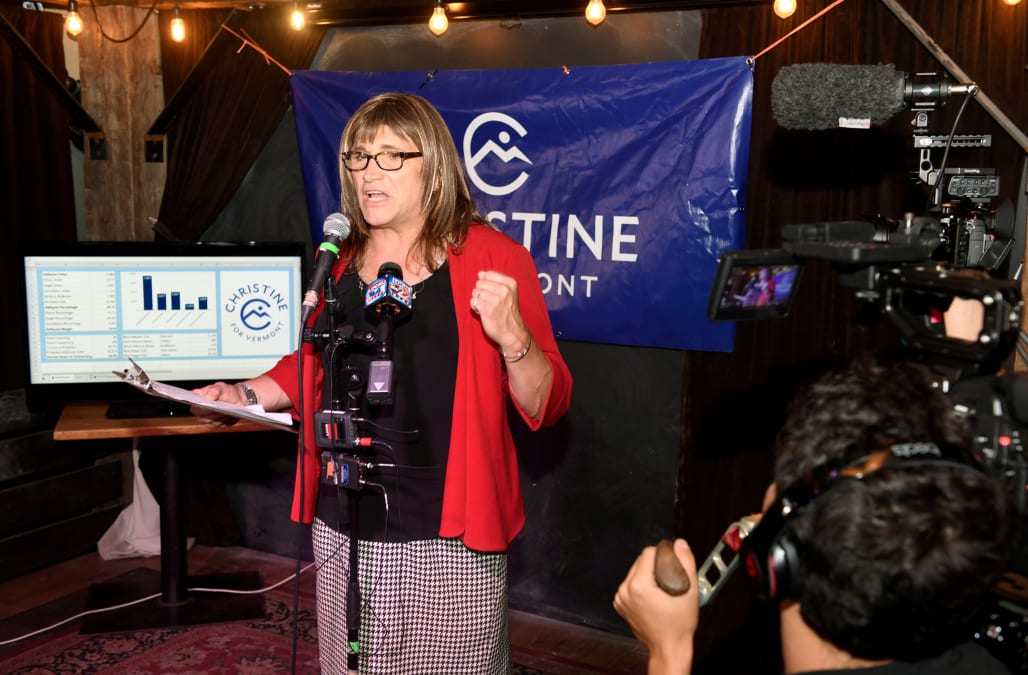 Vermont Democrats made Christine Hallquist the first openly transgender person to win a major party nomination for statewide office in U.S. history as she clinched Tuesday's primary election for governor.

She defeated three other Democrats on Tuesday and will take on incumbent Governor Phil Scott, a Republican, in the Nov. 6 general election, unofficial results showed. "I think Vermont is a beacon of hope for the rest of the country," Hallquist said during an interview with Reuters. "This is what I call expanding our moral compass and that is what I think it represents."

The contest comes at a time of uncertainty for transgender rights, which expanded under the administration of Democratic President Barack Obama. They have been reversed under Republican President Donald Trump's administration, a victory for religious conservatives who only recognize traditional gender roles.

Transgender candidates are hoping to build on the breakthrough year of 2017, when at least 10 won office across the country at levels ranging from state legislator to zoning (town planning) board - the most ever recorded.

This year, 43 transgender candidates have run for political office at all levels in the United States, most of them Democrats but a few running as independents, for the Green Party or for nonpartisan offices, according to Logan Casey, a research associate at the Harvard T.H. Chan School of Public Health.

Hallquist is the first openly transgender candidate to win a major party nomination for governor or a statewide office of any kind.

The win "is a defining moment in the movement for trans equality," Annise Parker, president and CEO of LGBTQ Victory Fund, which seeks to elect lesbian, gay, bisexual and transgender candidates, said in a statement.

Hallquist has made David her middle name

She enjoys name recognition as the former David Hallquist, the onetime chief executive of the Vermont Electric Cooperative who publicly transitioned to a female identity while leading the power utility in 2015.

While many transgender people change their name given at birth upon transition, Hallquist has made David her middle name and speaks comfortably about her previous identity.

Hallquist's transition was documented in "Denial," a film made by her son Derek. It was originally meant to be a documentary about the Vermont electric company dealing with climate change, but it also became a personal story as Hallquist came out as transgender to Derek during the making of the film.

"I'm proud to be a role model for others in ... marginalized communities so they can rise up and be recognized," Hallquist said.

Before Vermont's election, only four transgender candidates had won primaries in 2018, all for house and senate seats in state legislatures, and have a general election ahead. Seventeen have lost primary or general elections and 21 have yet to face voters, Casey's research shows.

"I love Vermont because we look beyond these surface issues," Hallquist said. "I just happen to be a leader who is transgender. Vermonters know that. They voted to support me because of what I am going to do for Vermont."