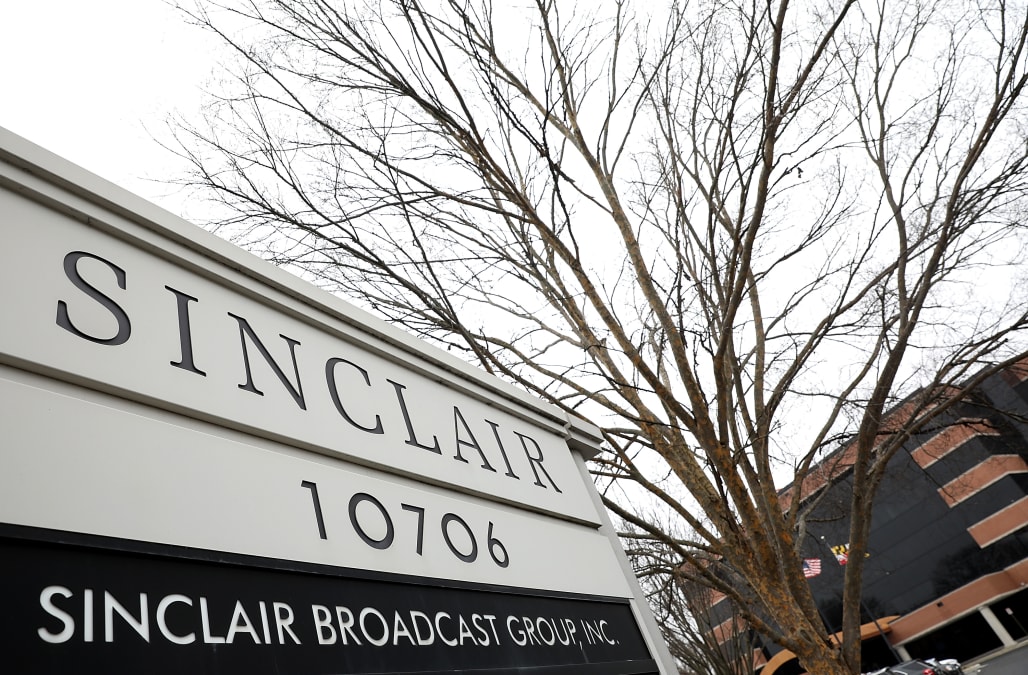 Aug 9 (Reuters) - Tribune Media Co terminated its $3.9 billion deal to be acquired by Sinclair Broadcast Group and filed suit, the company said on Thursday, after regulators objected to the acquisition that had received support from U.S. President Donald Trump.

"To maintain control over stations it was obligated to sell, Sinclair engaged in unnecessarily aggressive and protracted negotiations with the Department of Justice and the FCC over regulatory requirements," Tribune said.

"Sinclair's entire course of conduct has been in blatant violation of the merger agreement and, but for Sinclair's actions, the transaction could have closed long ago," the company said.

The Federal Communications Commission (FCC) said in July that Sinclair "did not fully disclose" facts about the merger, raising questions about whether the company "attempted to skirt the commission's broadcast ownership rules."

FCC Chairman Ajit Pai has been vocal in his opposition to the deal, a stance that was criticized by Trump.

"So sad and unfair that the FCC wouldn't approve the Sinclair Broadcast merger with Tribune. This would have been a great and much needed Conservative voice for and of the People," Trump said in a Twitter post in July.

Advocacy group Free Press said in an FCC filing in August 2017 that Sinclair forces its stations to “air pro-Trump propaganda and then seeks favors from the Trump administration.”

Pai told Congress after Trump's tweet that he stood by his decision to refer the issue to a hearing.

Sinclair, which owns 192 stations, said in May 2017 that it planned to acquire Chicago-based Tribune’s 42 TV stations in 33 markets in a deal that would significantly expand its reach.

Sinclair did not immediately comment on Thursday, but said last month "at no time have we withheld information or misled the FCC in any manner whatsoever.”

The FCC voted last month to refer the proposed merger to an administrative law judge to review questions about Sinclair's candor, a move that analysts had then said would likely lead to the deal's collapse.

"In light of the FCC's unanimous decision, referring the issue of Sinclair's conduct for a hearing before an administrative law judge, our merger cannot be completed within an acceptable time frame, if ever," said Tribune Media Chief Executive Officer Peter Kern.

"This uncertainty and delay would be detrimental to our company and our shareholders."

Kern told employees in an email reviewed by Reuters that it was not clear what was next for Tribune.

"No doubt the rumor mill will begin anew with speculation about who might buy us or who we might buy or whether the regulatory landscape still favors consolidation. We can’t do anything about such speculation," he wrote.

Under the terms of the deal, Tribune and Sinclair had the right to call off the deal without paying a termination fee if it was not completed by Aug. 8.

Pai’s statement raising questions about whether Sinclair would continue to control some of the stations it proposes to divest followed similar questions raised in separate filings by the American Civil Liberties Union and conservative news outlet Newsmax Media.

RELATED: The worst cities in the US for small businesses

The worst cities in the US for small businesses

The city of Bakersfield was enjoying an economic boom, but it had far too many of its eggs in the energy basket. When the oil industry crashed, so did the city's economy. The other major industry is agriculture, which is also suffering a downturn. That leaves small-business owners catering to a population that is financially anxious and tight with their dollars.

The city of Providence is an academic epicenter, but students have a tendency to leave the city once they graduate from its many colleges and universities. Population growth is stagnant, unemployment is high, and Rhode Island as a whole, according to CNBC, has been the worst state for business in the entire country for years, thanks in part to the Rhode Island's notorious talent drain.

Louisiana's economy is among the very worst in the entire country, and small-business owners in the state should know that things are especially challenging in Shreveport. In 2013, the city ranked dead last in the entire nation in terms of economic growth, and things have not improved much since. Unemployment is high, job growth is negative, and people are leaving the region.

Both the cost of doing business and the cost of living are low in Fort Smith, the largest city in Western Arkansas. The problem, however, is that just five states have lower college attainment rates. Business owners considering putting down stakes in the city should also know that a downturn in the farming economy has created an overall slowdown in income growth in the state.

In a recent study, the city of Columbus ranked high among mid-size American cities that have not yet recovered from the 2008 recession. Unemployment is high, the city is suffering from depopulation, and the largest employer by far is Fort Benning, a U.S. Army post.

Before opening a business in York, entrepreneurs should know that Watchdog.org called the mid-size city of 43,000 "the poster child for Pennsylvania's municipal pension problems." With more than $60 million in pension-related debt in 2015, the government had to spend one budget dollar out of four to fix the problem. This opened the door to deep cuts to all city services except law enforcement.

Before starting a business here, entrepreneurs should know that Montgomery has suffered a population decline for several years, landing it a place among the bottom five in the entire country in terms of migration. The state as a whole is -- and has for a long time been -- suffering from budget woes brought on by flat growth and skyrocketing costs associated with the prison system and providing health care for the poor.

Reading was ranked as the second-poorest city in the country in 2016. It's had a place among the 10 poorest, and sometimes been the very poorest, for much of the past 10 years. Reading is currently bound by Act 47, or the Financially Distressed Municipalities Act, which, among other things, affects how businesses and residents are taxed. The act also restricts the town's access to government funding.

Economically depressed Flint was already a difficult environment for budding entrepreneurs. The city is losing residents at a faster rate than any city besides Detroit, unemployment is higher than average, and there are so many vacant houses that Flint is one of the last cities in the U.S. with a five-digit median home cost. Then, the worst water crisis in modern history affected the health of thousands of residents, increased depopulation, and depressed economic output.

Brownsville is frequently named the poorest city in America, and the larger Rio Grande Valley is one of the country's poorest regions. Homelessness, hunger, and waves of illegal immigration blight the border town, where more than one in three residents live below the poverty line. Both its high school and college attainment figures rank among the bottom three in America.

Entrepreneurs considering setting up shop should consider that Huntington is one of the hardest-hit cities in one of the states suffering most severely from the nation's opioid crisis. The town's mayor estimates more than one in 10 residents are addicted. The larger metro region is losing residents, and fewer than 20 percent of the area's population are college-educated.

Atlantic City: Atlantic city waterline aerial view above ferris wheel by the ocean
Up Next