Barack Obama gets flooded with beautiful birthday messages on Twitter 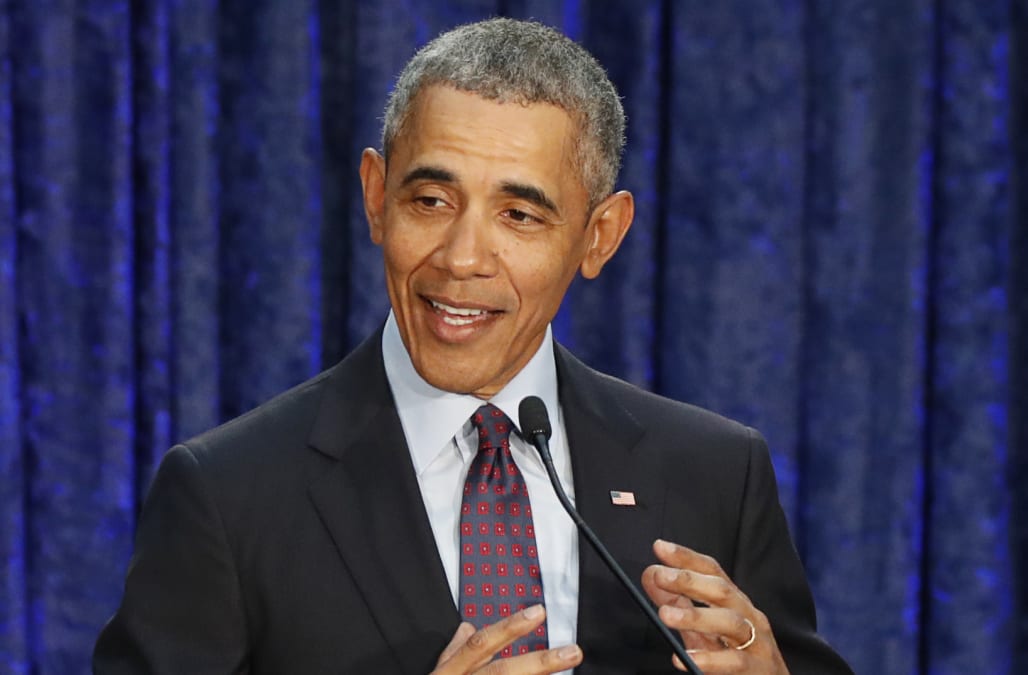 It’s Barack Obama’s special day! And folks on Twitter made a big noise about the former president turning 57 on Saturday.

The social media platform was flooded with uplifting and positive messages as celebrities, journalists, political leaders, sports stars, activists and countless others wished him well.

RELATED: How the Obama's spend their fortune

26 PHOTOS
How the Obamas spend their fortune
See Gallery

How the Obamas spend their fortune

The Obamas entered the White House with a $1.3 million net worth back in 2008. It has since grown to an estimated $40 million.

From 2005 (when Obama joined the US Senate) to 2016, the Obamas earned a total of $20.5 million from his government salary, book royalties, investment income, and Michelle's income from her job at University of Chicago Hospitals before she became first lady.

Obama earned $400,000 a year during his eight years as president and earns an annual pension of about $200,000 as former president.

The lion's share of their fortune came from books. Between 2005 and 2016, Obama earned $15.6 million in advances and royalties from his books "The Audacity of Hope" and "To Thee I Sing: A Letter to My Daughters," and royalties for "Dreams From My Father," according to Forbes, which reviewed tax returns and financial documents.

But Obama's lucrative career as an author isn't over. He and Michelle each signed book deals in 2017 worth at least $60 million.

Books aren't the Obamas' only foray into media. They recently signed a production deal with Netflix. While financial details haven't been released, The New York Times reported that previous similar deals were worth tens of millions of dollars.

Since leaving office, Obama has also been paid as much as $400,000 for public speaking events.

All things considered, the Obamas could stand to earn as much as $242.5 million in their post-presidency life, according to estimates from American University. But here's how they've spent their fortune so far...

The Obamas think long-term when it comes to their money. In 2007, Obama purchased Bright Directions Age-Based Growth Plans, each worth between $50,000 and $100,000, to pay for Malia and Sasha's college education. Malia started at Harvard in Fall 2017.

The Obamas also made an investment in real estate. They needed a new place to live after leaving the White House, so they purchased an 8,200-square-foot mansion in Washington, DC, for $8.1 million after previously renting it.

At purchase time, it was reportedly the second-most expensive home in the neighborhood, right behind Jeff Bezos' former textile museum-turned-mansion.

In addition to their Washington, DC, residence the Obamas still own their home in Chicago's Hyde Park that they bought for $1.65 million in 2005. They took out a $1.3 million mortgage on the home. It's currently valued around $2.5 million.

The Obamas have also enjoyed several vacations since leaving the White House. They first headed to Southern California and eventually made their way to Necker Island, where Obama was spotted kitesurfing with Richard Branson.

Obama also visited his home state of Hawaii and the island of Tetiaroa in French Polynesia, where he checked into luxury resort The Brando. A night there can cost anywhere from $3,034 to $4,318 for a one-bedroom villa.

The Obamas have also been spotted on David Geffen's yacht with Oprah, Tom Hanks, and Bruce Springsteen; wine tasting in Tuscany; and river rafting in Indonesia.

The General Services Administration is required to provide a former president with enough money to cover travel and business expenses, so it's hard to say how much of their own money the Obamas spent on their vacations.

We do know wardrobe isn't included in the presidential benefits and perks package.

While Michelle has donned expensive designer wear like Naeem Khan and a Versace gown worth an estimated $12,000 for special events as first lady, she's also well-known for her casual, relatable style. She's often been spotted in affordable brands like J.Crew, Target, and Converse.

Of course, she needs the perfect outfit for date night, which she and Barack always make time for. They couple was recently spotted attending a Beyoncé and Jay-Z concert.

Not all aspects of their life are as lavish as their vacations. Michelle opts for a bag lunch, like turkey chili, over eating out, the former president's chief of staff told People. And she's a regular at Soul Cycle, which costs $36 a class or $900 for 30 classes.

The Obamas also spend a significant amount of their own money on philanthropy. From 2009 to 2015, they gave away $1.1 million to charity, Forbes reported.

During that time frame, they donated to charities for African-American causes, veterans, disaster relief, homelessness and housing, and disease. More than half of their donations went to organizations for children.

Obama donated all the post-tax profits from his children's book, "Of Thee I Sing: A Letter To My Daughters," to provide scholarships for children of wounded and fallen soldiers. The donations totaled $392,000 between 2009 and 2015.

In 2015, Obama's penultimate year in office, they donated more than $64,000 to 30-plus charities, which was about 15% of their income, according to tax returns reviewed by TIME.

But none of this includes Obama's biggest donation to date — his $1.4 million Nobel Peace Prize award in 2009, all of which he donated to multiple charities.

Our lunches together were a highlight of every week at the White House. Last week's trip to @DogTagBakery was no different. Happy birthday to my brother, my friend, @BarackObama. pic.twitter.com/0faYjvnPW6

Check out the other posts below. This story will be updated.

Happy birthday, President @BarackObama! We miss you, and know that we'll continue fighting everyday to preserve your legacy. pic.twitter.com/QTYRMxy0Yp

Happy Birthday to my friend, brother, and the 44th President of the United States of America, President @BarackObama. pic.twitter.com/XGAV4meCHm

On @BarackObama's birthday, we're revisiting his 2006 words to Oprah about maintaining hope in dark times. #HappyBirthdayBarackObamapic.twitter.com/fgXHeSCrdx

Happy 57th Birthday to @BarackObama! We all miss you dearly, but look forward to your re-emergence on the 2018 campaign trail this fall. pic.twitter.com/AC6wl6swQ4

Happy Birthday @BarackObama! Thank you for your incredible service to our country and for continuing to inspire us to give back, speak out, and work to create a better future for all Americans! pic.twitter.com/GCDHBrIDSg

Happy birthday to Barack Obama, who was awarded the Nobel Peace Prize in 2009. pic.twitter.com/HWwHIaPWvn

Happy birthday @BarackObama - truly a man of integrity, who continues to represent America’s highest ideals at home and abroad. pic.twitter.com/aqIWf26EcB

@BarackObama, happy birthday! Check out the Public Papers from his presidency produced by GPO: https://t.co/YG4TLk2Dw9pic.twitter.com/zUo5rosqHr

Join us in wishing @BarackObama a special happy birthday! 🎉 pic.twitter.com/Liv2F7Fy31

Today’s Barack Obama’s Birthday. To get everyone in the mood, here’s some photos of him delivering cakes to people. pic.twitter.com/7yu0fVgofd

Today’s Barack Obama’s Birthday. To get everyone in the mood, here’s some photos of him delivering cakes to people. pic.twitter.com/7yu0fVgofd

Seriously, have some cake folks. 🍰 🎂 pic.twitter.com/RUFxmm0dIE

More from HuffPost US:
Dan Rather unloads on Donald Trump over 'Racist' attack on LeBron James
Donald Trump attacks LeBron James and Don Lemon in Twitter rant
NRA gets trolled with 'thoughts and prayers' over reported financial woes