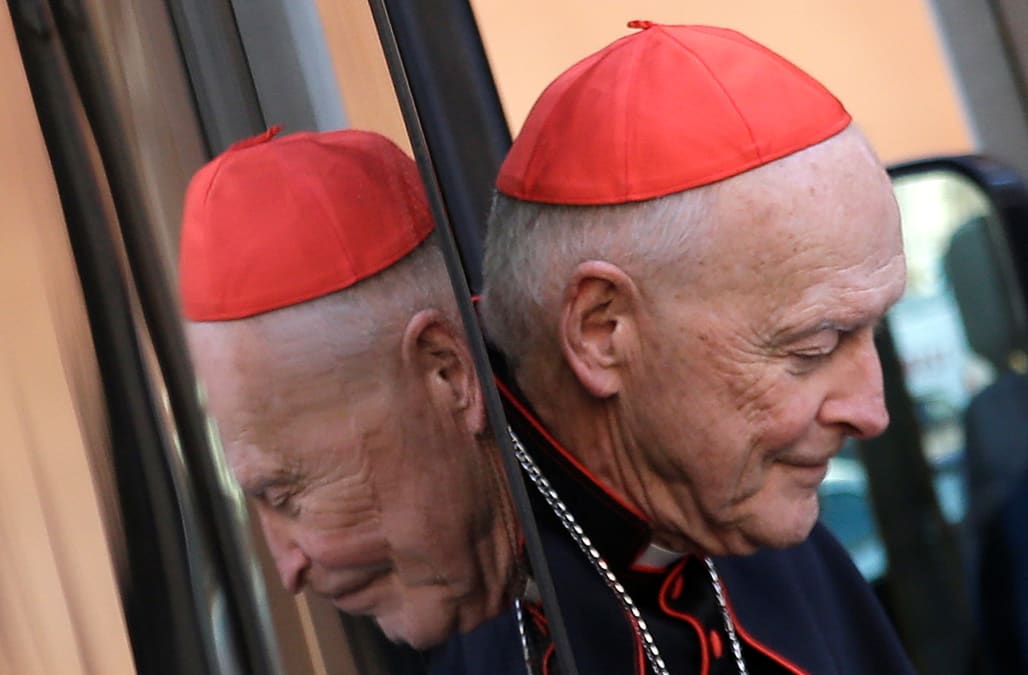 VATICAN CITY, July 28 (Reuters) - Pope Francis on Saturday accepted the resignation of Cardinal Theodore McCarrick, one of the U.S. Catholic Church's most prominent figures who has been at the center of a widening sexual abuse scandal.

McCarrick, 88, the former archbishop of Washington, D.C., is the first cardinal in living memory to lose his red hat and title. Other Cardinals who have been disciplined in sexual abuse scandals kept their membership in the College of Cardinals and their honorific "your eminence."

The allegations against McCarrick, which first surfaced publicly last month, came with Francis facing an image crisis on a second front, in Chile, where a growing abuse scandal has enveloped the Church in the Latin American country.

A Vatican statement said the pope ordered McCarrick's suspension from the exercise of any public ministry. This means he remains a priest but will be allowed to say Mass only in private.

Francis also ordered McCarrick to go into seclusion "for a life of prayer and penance until the accusations made against him are examined in a regular canonical trial."

McCarrick's sudden fall from grace stunned the American Church because he was a widely respected leader for decades and a confidant of popes and presidents.

Since then, another minor has come forward with allegations that McCarrick abused him when he was 11 years old, and several men have come forward to allege that McCarrick forced them to sleep with him at a beach house in New Jersey when they were adult seminarians studying for the priesthood.

McCarrick has said that he had "absolutely no recollection" of the alleged abuse of the teenager 50 years ago but has not commented on the other allegations.

The New York Times reported last week that two dioceses in New Jersey, where McCarrick served as bishop before being promoted to Washington in 2000, had reached financial settlements in 2005 and 2007 with men who said they were abused by McCarrick as adults decades ago.

Some U.S. Catholics have said the Vatican should send an inspector to the United States to determine who in the U.S. Church hierarchy knew of the alleged incidents and why McCarrick's rise was not impeded.

Last Tuesday, Cardinal Sean O'Malley of Boston said he was "deeply troubled" by the McCarrick case, saying it and others pointed to "a major gap" in Church policy on sexual conduct and sexual abuse by bishops or other top officials.

In 2013, Cardinal Keith O'Brien of Scotland recused himself from participating in the conclave that elected Francis after he was caught up in a sexual abuse scandal involving seminarians. He later renounced rights and privileges of being a cardinal but kept his red hat and title until his death earlier this year.

The last person to resign from the College of Cardinals is believed to be French theologian Louis Billot, who left over a disagreement with Pope Pius XI in 1927, according to the U.S. newspaper, National Catholic Reporter. (Reporting by Philip Pullella Editing by Mark Heinrich)