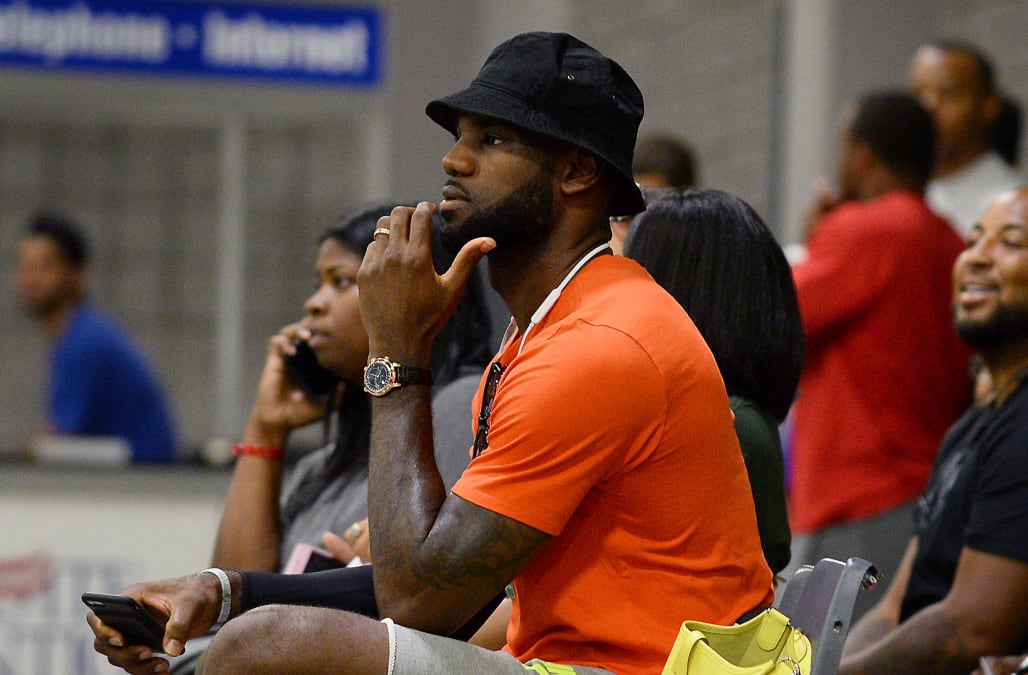 HENDERSON, Nev. — At 8:53 p.m. on Wednesday night, LeBron James ducked into the auxiliary gym of Liberty High School through a purple door at the back entrance. Flanked by a security team and his family, James took a seat on the baseline and acknowledged the squeals of delight from the young players in the crowd.

The cramped back gym at Liberty typically hosts freshman basketball games and has just three rows of bleachers. The bleachers filled in more than a half-hour before tip-off in anticipation of an appearance by LeBron James and a 13-and-under grassroots basketball game featuring his son, LeBron James Jr., of the North Coast Blue Chips.

Around 9:12 p.m., LeBron James left the gym, both teams cleared the floor and the game never tipped off.

A heated exchange between a security guard and the parent of a player on the opposing team, Chicago-based Mean Streets, led to security herding the players outside and officials canceling the game. Nicole Bankston, the mother of a Mean Streets player, said tensions escalated when Mean Street family members weren’t able to get in the gym. When a parent already in tried to explain the situation, the security intervened.

Canceling the game did little to quell the tension, as it took event organizers more than a half-hour to figure out a way to refund the $15 admission fee for those who paid to watch the game. That half-hour featured numerous screaming matches, a woman threatening to walk on the floor of a different game in protest and a generally chaotic scene that amused the two dozen college basketball coaches sitting in the stands scouting a different game. Three school police officers were called to calm things down and restore order.

“The security got all up in people’s face, and I guess that’s how all the commotion started,” Bankston said. “I guess after that they took the teams out of the gym because of the commotion. That’s all it was. It wasn’t a fight.”

Once refunds were handed out and tensions calmed, the night was little more than bad optics. It will likely most be remembered as the night that LeBron James Jr. burst into the basketball mainstream, as tensions boiled over from a teeming gymnasium that was ultimately too small to contain the interest in him. Though he’s yet to walk into an eighth-grade classroom, Bronny showed he has the drawing power that even transcends his father at this age. And after the attention this night receives, the attention won’t slow down.

How good is Bronny? There’s an inherent discomfort with grading a player who is entering the eighth grade. Some recruiting analysts, by rule, refuse to do so. But there’s also an undeniable buzz, as his mix tapes have more than a half-million views, he led his team to a USBA National Championship in Charlotte last week and he also took an unofficial visit to Duke. Playing on a national grassroots circuit lends to inevitable attention.

“He’s the hottest thing in youth basketball right now,” said a grassroots official. “All the views and metrics back it up.”

So how good is he? Obviously, it’s unfair to compare him to his father, who is the best player in the world. The best way to view Bronny’s career arc is that he’s considered among the top-30 kids in his class right now, a status that transcends his famous surname. The combination of his skill, genetics and growth opportunity give him a chance to emerge as a high school star and potentially a McDonald’s All-America.

But, of course, much could change by then. Many a junior high prodigy has stopped growing, switched sports or developed other interests. LeBron James hasn’t pushed his son into basketball, preferring him to develop a love for it on his own.

“It would be reckless to speak on a 13-year-old’s potential of the highest level,” said Corey Evans, an analyst for rivals.com. “But whenever he’s the son of arguably the greatest player to ever grace the playing floor, people are going to be interested.”

In the small samples Bronny’s shown so far, there’s a lot of intrigue. (That said, there were no high-end college coaches in the gym to watch Bronny’s game, as he’s still a few years from their radar).

The potential, however, is there for him to eventually develop into a top college prospect.

“He has a bravado about him which is clearly taken from his father and the raw talent that should make him a much-valued prospect as he ages,” Evans said. “He is already a more than solid athlete and upon the proper physical maturations as he ages, it is clear that he is someone we will have to take notice of not just because of his last name.”

And on a hectic night on the outskirts of Vegas, Bronny’s legend took hold without him even playing a game.

More from Yahoo Sports:
• Jerry Jones will require Dallas Cowboys to stand for anthem
• Antonio Brown outdoes himself by arriving in helicopter to training camp
• Larry Nassar alleges he was assaulted in prison
• Is USWNT blackballing a player for her religious beliefs?