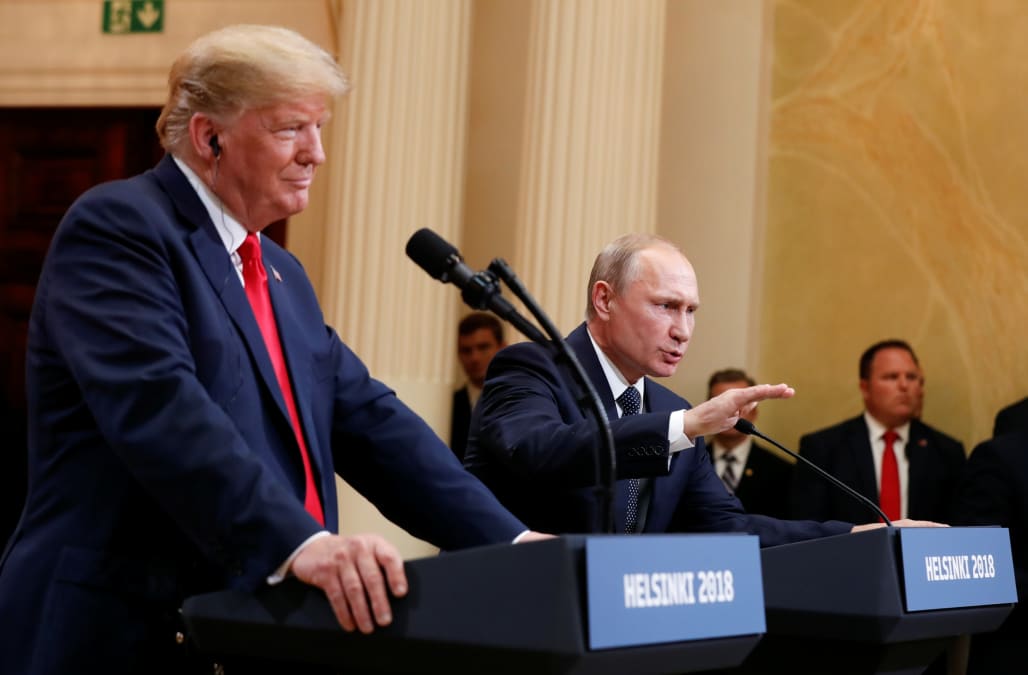 Several Republicans came to President Donald Trump's defense after his remarks during a Monday press conference with Russian President Vladimir Putin were slammed as "disgraceful" by politicians and pundits on both sides of the aisle.

At the Helsinki, Finland, press conference, which followed an hourslong private meeting between Trump and Putin, Trump cast doubt on the US intelligence community's assessment that Russia interfered in the 2016 US presidential election. He also attacked his Democratic opponents and the FBI, and — when election meddling was mentioned in a question — he said he held both countries accountable for their state of relations.

"My people came to me — Dan Coats came to me, some others — they said they think it's Russia," Trump said, referring to the director of national intelligence. "I have President Putin. He just said it's not Russia. I will say this: I don't see any reason why it would be."

He cited Putin's "extremely strong and powerful" denials of such interference. And he seemed to endorse a plan Putin proposed that would allow special counsel Robert Mueller's team to work with Russian investigators to question 12 Russians indicted last week.

'So, I think for the president to cast doubt is appropriate'

The comments were met with condemnation by many Republicans. Others, meanwhile, spared harsh words.

Republican Rep. Dana Rohrabacher of California told Bloomberg that the US meddles in elections "at a much higher rate" than Russia.

"They found it in their interest to meddle in our elections," Rohrabacher said of Russia. "But what the point is — we meddle in their elections. We meddle all over the world at a much higher rate than what Moscow does. And maybe it's all wrong, but the fact is we helped overthrow the government of Ukraine."

He added that the Trump campaign "didn't collude" with Russia and "what we saw today will put that to bed."

Republican Rep. Ron DeSantis of Florida, a close Trump ally who is running for governor, blamed former President Barack Obama for Russian election meddling and said the Trump administration has been tougher toward Russia than its predecessor.

Adding that the alleged hacking operation "was really a third-rate operation," DeSantis told Fox News that the Russians have gotten a lot of "mileage" out of it because it has been zeroed in on "by the president's political opponents, both in the Democratic Party and the press."

"And I think that's what bugs him about the issue, is that it's used to try to delegitimize his election victory," he said. "I personally think the Intel report and the indictment are credible in terms of assigning blame, culpability to Russia. But at the same time, I don't think that had anything to do with the fact that he whupped Hillary Clinton. And I also don't think there was any Trump-Russia collusion. And so there's just all these issues that have kind of been intermingled by a lot of the people that want to damage him as president."

DeSantis did mention that it was "not clear" to him what the areas of agreement are between Putin and the US.

"It was a different type of meeting compared to like the North Korea summit," DeSantis said. "I don't see, really, a path forward where this is going to be a big breakthrough."

"I think just last week in these very halls, we saw an example of the FBI not being trustworthy," he said. "We saw the downgrading of Hillary Clinton's criminal activity with the words being changed on [FBI agent] Peter Strzok's own computer, so for the president to cast doubt is not unreasonable."

Issa called Mueller's indictments "odd-timed," and added that they involved "people who can never be brought to justice and for whom there's even a question of how do we know" they engaged in election meddling.

Issa then called Putin "an evil man who has killed many people in his own country."

"There's no question at all that Russia is an adverse entity to the United States," he continued.

Vice President Mike Pence offered up the rosiest assessment of the press conference.

"What the world saw, what the American people saw, is that President Donald Trump will always put the prosperity and security of America first," he said in a statement.