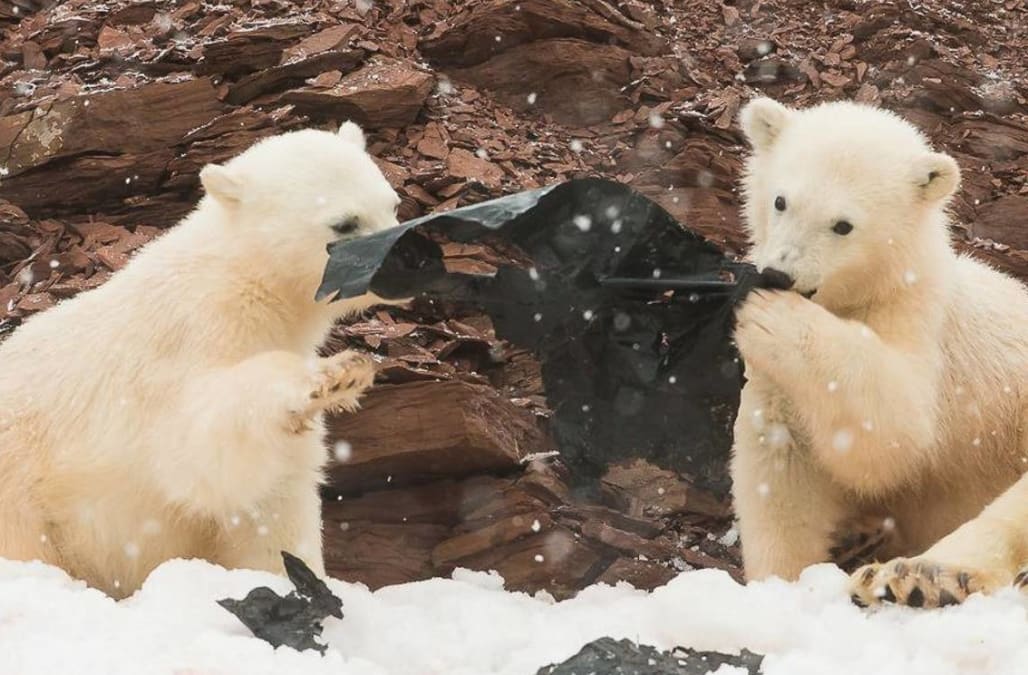 Tragic photos taken on a remote Arctic island show two young polar bear cubs playing with and chewing on a large sheet of black plastic as their mother looks away.

The siblings were spotted on Svalbard, a Norwegian archipelago about 600 miles away from the North Pole, by the Sail Against Plastic team, according to the Independent.

Claire Wallerstein, who recently completed the expedition to the Arctic Circle with a group of 15 Cornish scientists, artists, filmmakers and campaigners, said the trip was an incredible experience but also served as a harsh wakeup call.

"We were very lucky to be invited to take part in this unique expedition, and had an amazing time seeing Arctic wildlife, stunning glaciers and experiencing 24-hour sunlight," she said. "However, it was also a very sobering experience to see just how much plastic is making its way to this incredibly remote and apparently pristine environment."

Wallerstein said that the goal of the trip was to research the impact of plastics on the marine environment near the North Pole.

Sailing on a ship named the Blue Clipper, Wallerstein said she and the Sail Against Plastic team encountered not only plastic but other man-made pollutants as well.

"What we found on the beaches was sadly not so very different from what we find back home," Wallerstein concluded. "There was plenty of fishing waste, but the saddest thing was just how much of the waste blighting the Arctic is the same old disposable detritus of our daily lives: plastic bottles, cotton bud sticks, cigarette ends, wet wipes, polystyrene and food packaging."

The group also came across a plastic bag from a supermarket on the island bearing an ironic logo — the image of a polar bear.

The Independent reports that some of the plastic waste found on the archipelago could be traced back to as far away as Florida.

And while cleanup efforts have been made in the area, researchers say pollution has already taken a heavy toll on the region's Arctic wildlife. The team discovered that a whopping 90 percent of fulmars, a white species of seabird, on Svalbard have plastic bits in their digestive systems.