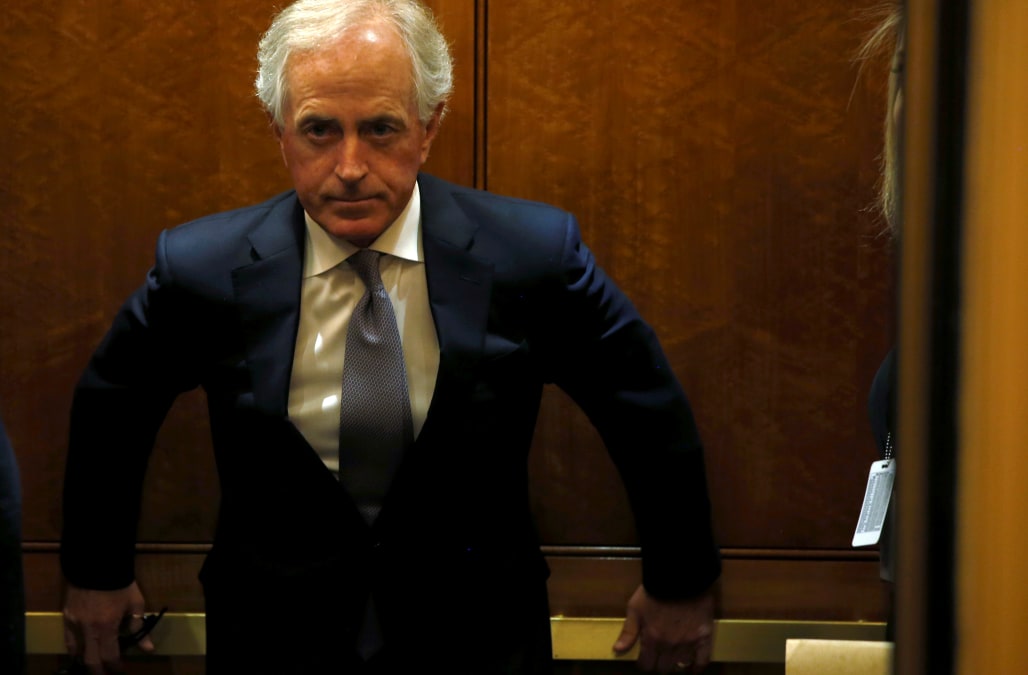 Sen. Bob Corker, the Republican chairman of the Foreign Relations Committee, on Wednesday chided his GOP colleagues for being "cultish" and "fearful" under President Donald Trump, and said some are concerned about their prospects in the midterm elections.

The Tennessee lawmaker said there are a number of reticent Republicans who are afraid to push back at Trump because they do not want to agitate the president.

"We are in a strange place. It's almost, it's becoming a cultish thing, isn't it?" said Corker, who also sits on the Senate Budget Committee. "It's not a good place for any party to end up with a cult-like situation as it relates to a president that happens to be of, purportedly, of the same party."

He added, "We have a lot of people who are willing to do the things that they feel are right for our country. We have some who are fearful of upsetting the president. But it's not a good place for us to be."

Corker's comments on Wednesday come the day after he lashed out at his Republican colleagues for blocking legislation that would have put checks on the president's ability to levy tariffs.

Trump vs. Corker: The Twitter battle
Republican U.S. presidential candidate Donald Trump greets Senator Bob Corker (R-TN) at a campaign rally in Raleigh, North Carolina, U.S., July 5, 2016. REUTERS/Joshua Roberts
It's a shame the White House has become an adult day care center. Someone obviously missed their shift this morning.
Bob Corker gave us the Iran Deal, & that's about it. We need HealthCare, we need Tax Cuts/Reform, we need people that can get the job done!
Senator Bob Corker "begged" me to endorse him for re-election in Tennessee. I said "NO" and he dropped out (said he could not win without...
...Hence, I would fully expect Corker to be a negative voice and stand in the way of our great agenda. Didn't have the guts to run!
..my endorsement). He also wanted to be Secretary of State, I said "NO THANKS." He is also largely responsible for the horrendous Iran Deal!
The Failing @nytimes set Liddle' Bob Corker up by recording his conversation. Was made to sound a fool, and that's what I am dealing with!
Republican U.S. presidential candidate Donald Trump listens as Senator Bob Corker (R-TN) speaks at a campaign rally in Raleigh, North Carolina, U.S., July 5, 2016. REUTERS/Joshua Roberts TPX IMAGES OF THE DAY
UNITED STATES - JULY 5: Republican Presidential candidate Donald Trump, left, and Sen. Bob Corker, R-Tenn., appear on stage during a rally at the Duke Energy Center in Raleigh, N.C., July 5, 2016. (Photo By Tom Williams/CQ Roll Call)
Bob Corker, who helped President O give us the bad Iran Deal & couldn't get elected dog catcher in Tennessee, is now fighting Tax Cuts....
...Corker dropped out of the race in Tennesse when I refused to endorse him, and now is only negative on anything Trump. Look at his record!
Isn't it sad that lightweight Senator Bob Corker, who couldn't get re-elected in the Great State of Tennessee, will now fight Tax Cuts plus!
Same untruths from an utterly untruthful president. #AlertTheDaycareStaff
Up Next

"A lot of them would vote for it," Corker said Tuesday of his GOP colleagues. "But no, no, no, 'gosh, we might poke the bear,' is the language I've been hearing in the hallways," he said, mockingly. "The president might get upset with us as United States senators," Corker continued.

Sen. Thom Tillis, R-N.C., said Wednesday he is comfortable disagreeing with the president and that Corker was only frustrated his amendment did not pass.

Corker has been an outspoken critic of Trump. He notably squabbled with the president on Twitter last year, calling the White House "an adult daycare center."

In his comments on Wednesday, Corker said his party has diverged from its traditional values, particularly on trade. He also blasted the Trump administration for its "ad hoc" approach to the issue.

"It seems to me, especially on things like trade, that you know has been one of our central elements is fair, fair but free trade. And to have an administration that wakes up every day and at an ad hoc basis is just making stuff up as they go along with no coherency to it," said the Tennessee senator.

He also said he thought a lot of the remarks from the president following his summit with North Korean leader Kim Jong Un was "hyperbole," but that he's glad the meeting took place and could lead to positive results.

"I think it could be the beginning of us solving a problem that would be good for our country and good for the world, and I hope that can be the case," he said.

More from NBC News:
House GOP moderates, conservatives reach deal to vote on 2 immigration bills
Foreign interference in US elections is still going on, Mueller tells judge
Net neutrality repeal takes effect, but the fight is far from over