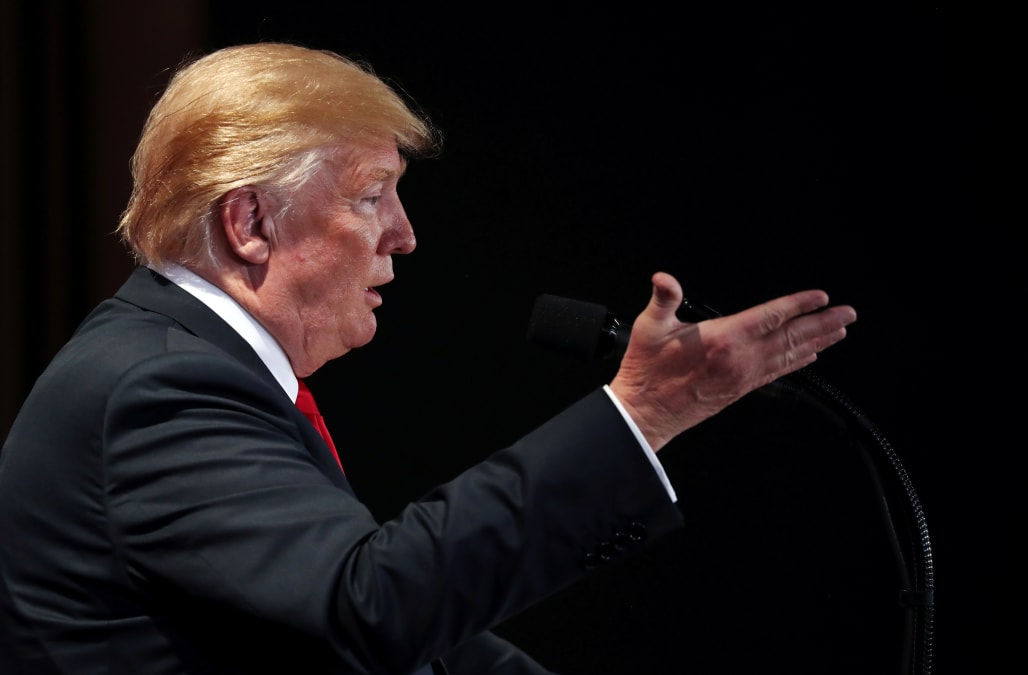 Although the Pentagon said Defense Secretary Jim Mattis was consulted ahead of time, current and former U.S. defense officials expressed concern at the possibility that the United States would unilaterally halt military exercises without an explicit concession from North Korea lowering the threat from Pyongyang.

"I'm sort of stunned about how much we gave up and how little we got in return," said one former official, saying the decision "borders on irresponsible" and would erode readiness and diminish the credibility of the U.S.-South Korean alliance.

Trump made the remarks at a news conference after his summit with North Korean leader Kim Jong Un in Singapore, calling war games expensive and "provocative" - echoing a North Korean criticism that the United States had long rejected.

SEE ALSO: Here's how world leaders are reacting to the historic Trump-Kim summit

Trump also said he wants "at some point" to withdraw the American troops currently in South Korea.

"We have right now 32,000 soldiers in South Korea, and I'd like to be able to bring them back home. But that's not part of the equation right now," Trump said.

About 28,500 U.S. troops are stationed in South Korea, a legacy of the Korean War, which ended in 1953 in an armistice that left the two Koreas technically still at war.

If implemented, the end of military exercises could be one of the most concrete and controversial moves to arise from Trump's summit with Kim, who pledged to pursue denuclearization but offered no details.

South Korea's Presidential Blue House said it needed to "to find out the precise meaning or intentions" of Trump's statement, while adding that it was willing to "explore various measures to help the talks move forward more smoothly."

A spokeswoman for U.S. military forces in Korea said they had not received any direction to cease joint military drills.

The move could diminish the U.S. military's ability to "fight tonight," a term American commanders have used for years to describe the heightened posture of U.S. forces in one of the world's most-sensitive military flashpoints. Even during budget cuts under Trump's predecessor Barack Obama that eroded readiness elsewhere in the world, the Pentagon prioritized exercises on the Korean peninsula that included everything from air combat to infantry drills.

The U.S.-South Korean exercise calendar hits a high point every year with the Foal Eagle and Max Thunder drills, which both wrapped up last month.

Asked about the plan to halt exercises, a U.S. official who spoke on condition of anonymity shrugged and called it a political, not military, decision.

The Pentagon declined to flesh out Trump's remarks about suspending drills, a move the U.S. military had long resisted, saying it was working with the White House, U.S. allies and partners "on the way forward following the summit."

Pentagon spokeswoman Dana White denied that Mattis was caught off guard by the announcement, telling Pentagon reporters: "There were no surprises." In a separate statement, White saidMattis was "fully aligned" with Trump.

"I was shocked when he called the exercises 'provocative,' a very unlikely word to be used by a U.S. president," the official said, speaking on condition of anonymity.

South Korean President Moon Jae-in spoke by phone with Trump for 20 minutes late on Tuesday, but an official readout of the call made no mention of military exercises.

South Korea said last month the issue of U.S. troops stationed there was unrelated to any future peace treaty with North Korea and that American forces should stay even if such an agreement were signed.

China, historically North Korea's closest partner, has also sought a "freeze for freeze" agreement in which the exercises would be suspended in exchange for North Korea's stopping its weapons development.

The United States had rejected such proposals in the past, but North Korea has unilaterally declared an end to testing its nuclear weapons and ballistic missiles, and now Trump appears ready to end exercises while talks are ongoing.

Given Kim only repeated vague commitments to pursue the "denuclearization of the Korean peninsula," some experts questioned whether Trump was making excessive concessions.

"I hope - but am not yet confident - that (North Korea) will take steps that match the concessions Mr. Trump has already made by ending military exercises in South Korea and granting Mr. Kim legitimacy with this summit," Thomas Countryman, a top arms control official under President Barack Obama, told Reuters.

Mitchell Reiss, who served from 2003-2005 as the U.S. State Department's director of policy planning, said it is important to make such decisions hand-in-hand with South Korea.

"My first question is whether our allies, the South Koreans, were consulted in advance of suspending these military exercises," Reiss told Reuters. "My second question is, what did we receive in return for this concession?" (Reporting by Josh Smith and Phil Stewart; Additional reporting by Idrees Ali and Doina Chiacu in Washington, David Brunnstrom in Singapore, and Hyonhee Shin and Haejin Choi in Seoul. Writing by Josh Smith and Arshad Mohammed; Editing by Michael Perry, Gerry Doyle and Will Dunham)