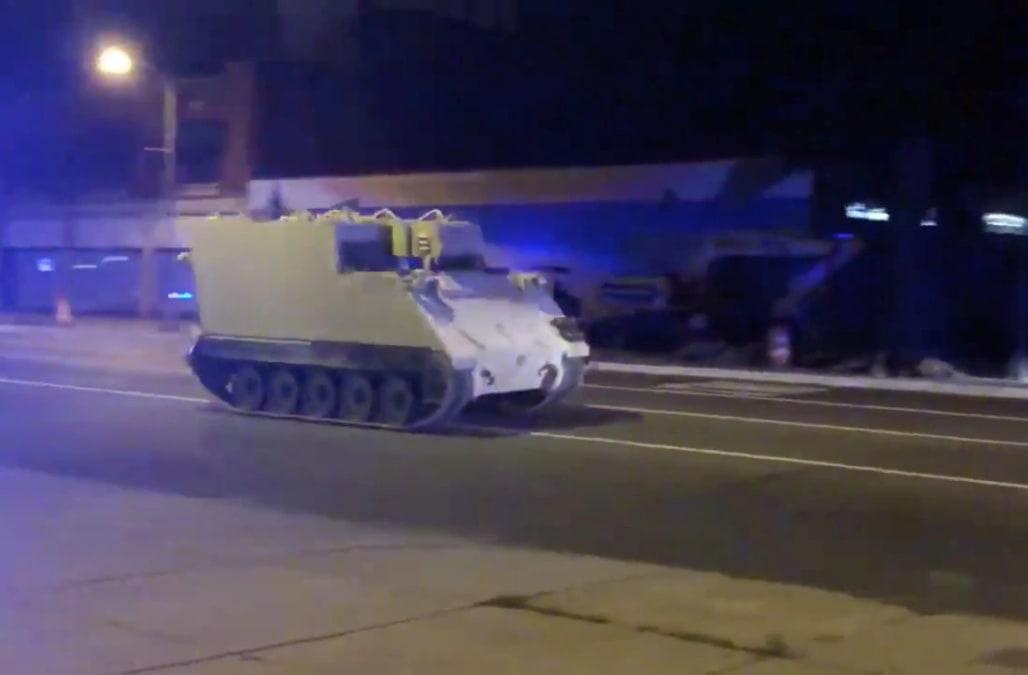 A soldier accused of driving off a Virginia National Guard base in a stolen armored personnel carrier while high on drugs seemingly left a trail of virtual breadcrumbs foreshadowing his two-hour joyride and eventual arrest.

In the hours before he drove off Fort Pickett in Nottoway County Tuesday evening, 29-year-old Joshua Phillip Yabut tweeted out a Wikipedia entry about the M113 armored personal carrier — which is similar to the M577 vehicle he allegedly stole — and a map of of the area not far from where he was apprehended by authorities.

He also posted a series of photos and videos inside the armored vehicle before and during his joyride.

An armored personnel carrier (APC), which was purpotedly stolen, drives along a street in Richmond, Virginia, U.S. June 5, 2018, in this still image taken from a video obtained from social media.

wutang clan ain’t nothin to fuck wit booiiiiiiii https://t.co/NUvnVRCRkE
https://t.co/iNig6ZpmqP
https://t.co/ULPOKzS04n
This is INSANE! Someone has hijacked a “Tank-like” vehicle from Fort Pickett and just drove it by our apartment! Th… https://t.co/WueyVCDtl4
The man who fled in a stolen armored personnel vehicle was taken into custody Tuesday night in Richmond. Here's an… https://t.co/4KVI3TLxw7
Up Next

Yabut’s Twitter feed is littered with no shortage of bizarre tweets, including ones from Tuesday, which read “where is this damn water buffalo” and “all i wanna do is get an anime wife.”

State police chased the vehicle for nearly two hours — with speeds topping out at around 40 mph — before they arrested Yabut in downtown Richmond, around 10 p.m. the same evening.

“The vehicle was not equipped with any weapons, but the soldier did have his personal weapon with him but had no ammunition,” Puryear said.

Police charged him with driving under the influence of drugs, felony eluding police and felony unauthorized used of a vehicle.

Yabut, who was deployed in Afghanistan with the Illinois National Guard between 2008 and 2009, has served for more than 11 years. He was booked in Richmond Jail and police are continuing to investigate the incident.