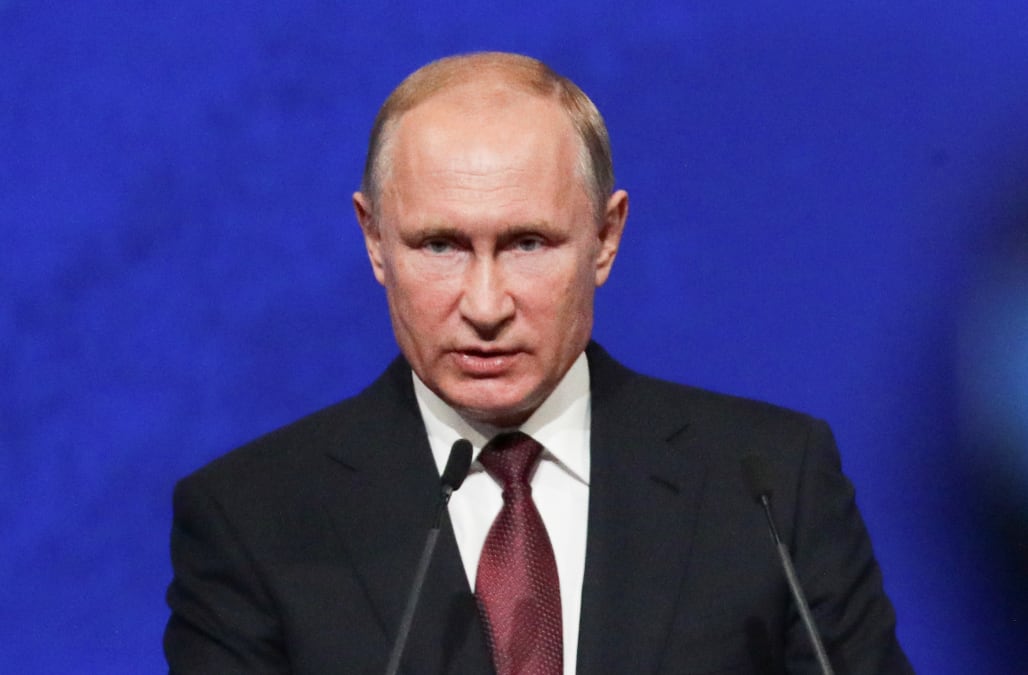 MOSCOW, May 25 (Reuters) - Vladimir Putin said on Friday he would respect the Russian constitution which bans anyone from serving two consecutive presidential terms, meaning he will step down from his post in 2024 when his current term expires.

His remarks, made to reporters at an economic forum in St Petersburg and broadcast on state TV, are not a surprise and do not necessarily mean he will relinquish power in six years.

Putin has stepped down as president once before, in 2008, after serving two back-to-back terms only to return in 2012 after doing a stint as prime minister, a maneuver he would be legally entitled to carry out again.

"I have always strictly abided by and abide by the constitution of the Russian Federation," Putin said, when asked if and when he would be leaving office.

"In the constitution it's clearly written that nobody can serve more than two terms in a row ... I intend to abide by this rule."

Putin rises late in the morning, taking breakfast around noon. He usually tucks into a large omelet or a big bowl of porridge, with some quail eggs and fruit juice on the side. Newsweek reports that the ingredients are "dispatched regularly from the farmland estates of the Patriarch Kirill, Russia’s religious leader."

Once he's finished his meal, he drinks coffee.

Next, it's time to exercise. Newsweek reported that Putin spends about two hours swimming. While he's in the water, Putin often "gets much of Russia’s thinking done," Judah writes.

The 64-year-old has been keen to cultivate an athletic, masculine image over the years. In 2015, he was photographed exercising with Russian Prime Minister Dmitry Medvedev. As Esquire reported, his workout outfit cost $3,200.

In this photo, Russias President Vladimir Putin works out at a gym at the Bocharov Ruchei state residence in Sochi on August 30, 2015.

Putin is conservative with his sartorial choices, preferring bespoke suits and "dour" Valentino ties, according to Judah.

In this photo, Russia's President Vladimir Putin attends a meeting with Moscow Region Governor Andrei Vorovyev at the Moscow Kremlin on June 5, 2017.

The state-run website Russia Beyond the Headlines reports that Putin's favorite clothing brands are Kiton and Brioni.

In this photo, French President Emmanuel Macron, right, and Russian President Vladimir Putin are seen in Versailles, France on May 29, 2017.

The Russian president usually doesn't get to work until the early afternoon. First, Putin typically sits down at his desk to read briefing notes.

In this photo, Russian President Vladimir Putin takes part in a video link, dedicated to the start of natural gas supplying from mainland Russia to Crimea, in Moscow, Russia, December 27, 2016.

These include reports on domestic intelligence and foreign affairs, as well as clips from the Russian press and the international media. Beyond work, the Russian president isn't much of a reader, although he did indulge in at least one action novel in 2006, according to Newsweek.

Once and a while, an adviser will show Putin a satirical online video mocking him and his government. Otherwise, he abstains from most technology at work, preferring "red folders with paper documents, and fixed-line Soviet Warera telephones" to computers, as Newsweek reported.

In this photo, Russian Prime Minister Vladimir Putin sits at a desk while visiting a local university in Novosibirsk on October 22, 2008.

The Russian president is a night owl and often stays up quite late working. He's at his sharpest at night, writes Newsweek.

In this photo, Russia's President Vladimir Putin arrives at the Congress Hall of the Siberian Federal University on March 1, 2017.

While traveling abroad, the Russian president's schedule tightens even more. Wherever he stays, everything is replaced, including sheets, toiletries and fruit bowls. Putin also never accepts food from a host that hasn't been cleared by the Kremlin first.

The Telegraph previously reported that Putin's favorite food is pistachio ice cream. He also once gifted his Chinese counterpart Xi Jinping with a tub of ice cream during last year's G20 summit. However, the Newsweek article reported that when Putin travels, he "cannot be served milk products."

In this photo, Russian President Vladimir Putin, right, and other officials eat in a restaurant in Moscow on March 2, 2008.

According to reports, Putin abstains from alcohol, except for during formal receptions. Projecting the image of teetotalism also may be a political move. According to Politico, the Russian president may be taking a symbolic stand amid Russia's alcoholism epidemic and contrasting himself with his predecessor Boris Yeltsin.

In this photo, Russian President Vladimir Putin and U.S. President Barack Obama share a toast during the luncheon at the United Nations General Assembly in New York, September 28, 2015.

His work schedule tends to be more flexible over the weekend to accommodate Putin's English language classes. On Sunday, he sometimes prays and makes confession. Nonetheless, Russian officials close to the president stressed that "his life is not that of a Christian," according to Newsweek.

In this photo, Russian President Vladimir Putin lights a candle during his visit to the Life-giving Trinity church in Moscow, September 10, 2014.

Every few weeks, Putin's schedule clears to make room for one of his favorite past times: ice hockey. The Russian president doesn't just observe the sport. He plays in a league, squaring off against teams of bodyguards.

In this photo, Russian President Vladimir Putin plays in an ice hockey training session at the Shayba Arena in Sochi, Russia, April 30, 2017.

As USA Today reported, Putin's opponents and teammates alike tend to give him quite a bit of space during the games.

In this photo, Russian President Vladimir Putin, right, plays in a gala game of the Night Ice Hockey League in Sochi, Russia, May 10, 2016.

In this photo, Russin President Vladimir Putin plays with his dogs Buffy, right, and Yume at his residence Novo-Ogariovo, outside Moscow.

Yume sparked an incident in 2016 when she trotted into an interview and barked at visiting Japanese journalists. Putin responded by giving the Akita a treat and showing off some of her tricks, according to CNN.

In this photo, Russian President Vladimir Putin plays with his dog Yume, a female Akita Inu, before giving an interview to Japanese Nippon Television and Yomiuri newspaper at the Kremlin in Moscow, Russia, December 7, 2016.

Newsweek reports that Putin likes to stick close to home. He hates commuting to Moscow, even though it only takes about 25 minutes, and seems to prefer his Novo-Ogaryovo complex on the Black Sea to the Kremlin.

In this photo, Russian President Vladimir Putin leaves a car during flowers laying ceremony at the monument to Dmitry Pozharsky and Kuzma Minin at the Red Square near the Kremlin marking a National Unity Day in Moscow on November 4, 2016.