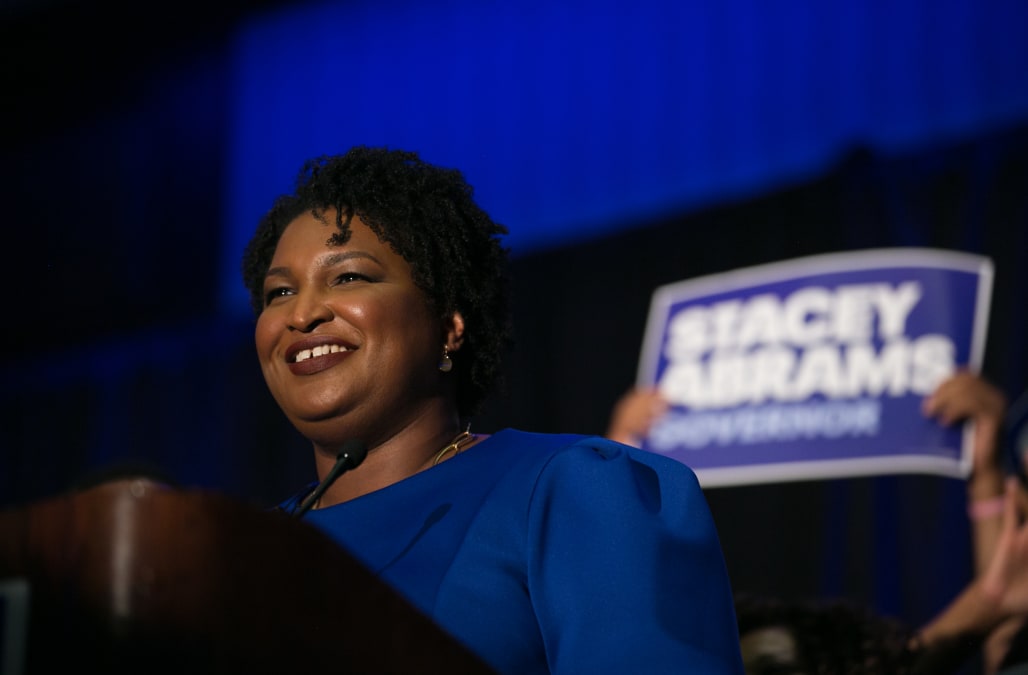 Now, Abrams will attempt to make history by becoming the nation's first black female governor — and Georgia's first woman governor — by winning the general election in November in a state that Republicans still dominate.

"We are writing the next chapter of Georgia history, where no one is unseen, no one is unheard and no one is uninspired," Abrams told supporters in Atlanta Tuesday night at her victory party. "Now let's go get it done."

Evans quickly backed Abrams, declaring that Democrats must "find a unified voice to rally against Trump."

The GOP had its own contentious gubernatorial primary Tuesday, which is headed for a July 24 runoff, giving Abrams a head start.

Lt. Gov. Casey Cagle had a clear lead in the five-way primary, but was still well short of reaching the 50 percent threshold needed to avoid a runoff. He'll face Georgia Secretary of State Brian Kemp, who had 26 percent of the vote (128,083 votes) to Cagle's 39 percent (187,963 votes), to chose the GOP nominee to take on Abrams in the fall.

The "Stacey v. Stacey" primary was being closely watched because it was seen as a microcosm of a wider debate Democrats have been engaged in since President Donald Trump's upset election in 2016: Should the party prioritize winning back white swing voters or focus on mobilizing its burgeoning coalition of minorities and young people?

Abrams, the former minority leader of the Georgia Statehouse, is a rising star in her party thanks to her years-long work trying to turn the state blue by mobilizing Democratic-leaning residents who don't typically turn out to vote.

Evans, who is white, was raised by a teenage mother in the rural northwest corner of the state and had vowed to win over moderates in the general election.

While Evans fit the mold of candidates that Democrats have historically nominated in the South, black women have been demanding more representation in the party, arguing that they have been its most loyal voters.

"Stacey Abrams won this election because she reached out and engaged communities of color, particularly black voters, on the issues that they care about," said Adrianne Shropshire, executive director of BlackPAC, which supported Abrams. "This historic victory is a model for candidates all across the country."

In Georgia, women of color make up 23 percent of the population, but only 8 percent of officeholders, according to the Reflective Democracy Campaign.

"Stacey Abrams is expanding the limits of the possible in American politics," said Aimee Castenell, a spokesperson for the progressive Working Families Party, which backed Abrams.

The state has been trending in Democrats' direction as its population diversifies, with Hillary Clinton coming within 5 percentage points of Donald Trump in 2016.

But Republicans still rule the Peach State and Abrams will surprise many if she wins the governorship.

The GOP governor primary earned headlines as the candidates tried to one-up each other on who would be toughest on immigration.

One of Cagle's ads featured images of MS-13 gang tattoos and guns being fired at the screen, while Kemp pledged to round up undocumented immigrants in his "big truck." A third contestant, state Sen. Michael Williams, outfitted an entire "deportation bus" for the purpose.

In other results Tuesday night, in a heated Democratic primary in Kentucky, Amy McGrath, a former Marine combat pilot whose introductory video went viral, defeated Jim Gray, Lexington's first openly gay mayor. It's another victory for a woman, and another for a candidate who positioned herself as the insurgent against the party establishment's choice.

And a high school math teacher ousted one of Kentucky's most powerful politicians after a wave of protests against education cuts gripped state capitols this year. Travis Brenda won the GOP primary against Kentucky House Majority Leader Jonathan Shell, a stunning upset for a man who helped engineer Republicans' takeover the state in 2010.

In Texas, Democrat Laura Moser was badly trailing Lizzie Fletcher in a House seat runoff that became a flashpoint for progressives, who had rallied behind Moser after the Democratic Congressional Campaign Committee attacked her. With 16 percent of precincts reporting, Fletcher was leading Moser two-to-one.

More from NBC News:
DOE's DeVos says school safety commission will have 'best practices' by year's end
Woman who claims affair with Missouri Governor speaks out
'Anguish' at the border as immigrant children are separated from parents