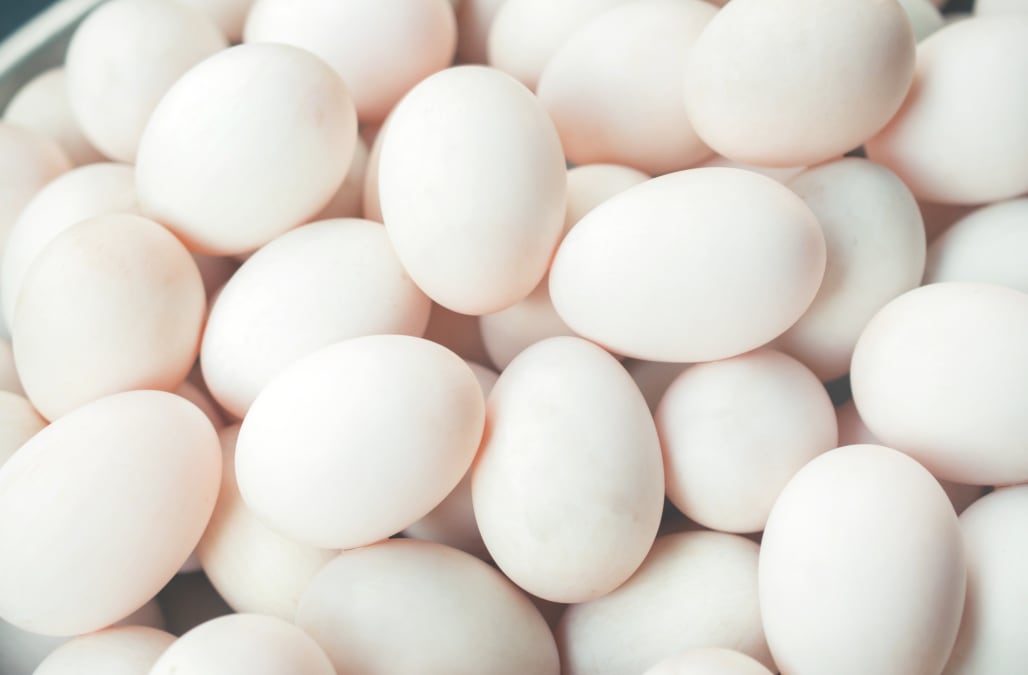 The North Carolina egg farm authorities believe is the source of a recent salmonella outbreak — which has so far sickened people across nine states — has had an “ongoing rodent infestation” since at least September 2017.

That dates back months before Rose Acre Farms, one of the biggest egg producers in the country, recalled nearly 207 million eggs they feared could have been contaminated with Salmonella.

Insects buzzed about the chicken feed and throughout the company's North Carolina facility, which also housed dozens of rats. Inspectors discovered the bodies of dead rodents while other rats were spotted “burrowing in and out of manure piles,” according to the U.S. Food and Drug Administration Report.

The “unacceptable rodent” activity had been going on months before the first signs of the salmonella outbreak surfaced.

Biggest food safety mistakes you're making at the grocery store
No. 1: WIPE DOWN SHOPPING CART

According to Peter, the first thing you should do when you walk into a supermarket is wipe down your cart.

"You don’t know how often these carts get cleaned," Peter says.

The good news is that most grocery stores will have a box of wipes at the entrance, so use them! And if they don’t, don’t feel silly bringing your own.

Pro tip: Be sure the wipes contain bleach!

"The bleach is going to kill the viruses and all the stubborn things that are on there," Peter stresses.

(Rest assured we’re stocking up as we speak!)

No. 2: GRAB MILK + DAIRY FROM BACK AND BOTTOM

Do you know what the "cold line" in the refrigerated section of the grocery store is?

"It's a stock-to line," Peter explains. "You don’t want to over-stock the refrigerator. The manufacturers have it that way because [they] want to make sure the food stays cold, so it doesn’t spoil quickly or develop bacteria."

(Watch the video above to see an example of a "cold line"!)

Word to the wise: Stores will usually put the items with the soonest sell-by date front and center, so don't just grab the first one you see. Do some digging!

But don't ignore the expiration date either! Shoppers shift products around all the time, the food safety expert points out.

Nobody wants to go home with cracked eggs, so do your due diligence before you check out.

Essentially, a cracked egg is more prone to bacteria, like salmonella.

The plastic wrapping on pre-packaged raw meat can easily get punctured, letting its juices to run on your other food (welp), so ALWAYS double bag it.

Then, once it's wrapped, place the raw meat near the cold or frozen food in your cart.

A warped or punctured can of food may seem harmless, but it could be a food safety red flag!

If a can is dented at the seams or swollen, Peter explains, it could be a sign of bacteria, including botulism.

"If you see any cans like that," he advises, "you should report it to the supermarket."

"Let them take that can [and] send it back to the manufacturer. It may be a recall. You may be saving a life."

No. 6: *NEVER* PUT PRODUCE OR UNPACKAGED GOODS ON CONVEYOR BELT

Okay, you've gotten to the homestretch and you can't wait to bolt out of the store after checking out -- but hold up! Don't just throw everything in your cart onto the conveyor belt!

In fact, NEVER put produce or anything that isn’t packaged directly on there.

Much like with your cart, you never know what contaminants and germs could have gotten on there from other shoppers.

"This is probably as dirty, if not dirtier, than the [shopping] cart," Peter says.

Peter suggests washing your reusable grocery bags at least once every two weeks -- or as soon as you notice it's contaminated!

If you have a plastic one, wipe it down with a soapy dish towel. If it's canvas or fabric, you can just throw it in the washing machine.

Oh, and one more thing (though it may seem obvious) -- always, always, ALWAYS wash your hands!

What’s more, the manager at the Hyde County farm failed to take appropriate action against the rat infestation as well as against other unsanitary practices, according to the report.

“Additionally, throughout the inspection several production and maintenance employees were observed touching non-food contact surfaces,” including their faces, hair, production equipment and trash cans, “and then touch shell eggs and food contact surfaces without changing gloves or washing hands,” according to the report.

This combination of “unsanitary conditions and poor employee practices” cultivated an environment which allowed for the “spread of filth and pathogens throughout the facility that could cause the contamination of egg processing equipment and eggs,” according to the report.

The inspection detailed in the report was commissioned in response to the outbreak, with the probe itself occurring between March and mid-April.

So far, 35 people who consumed eggs traced back to Rose Acre Farms’ North Carolina facility have been sick since last November, according to Centers for Disease Control and Prevention.

Illnesses have been reported in each of those states, according to the CDC, primarily in New York and Virginia.

So far 11 have been hospitalized, but no deaths have been reported.