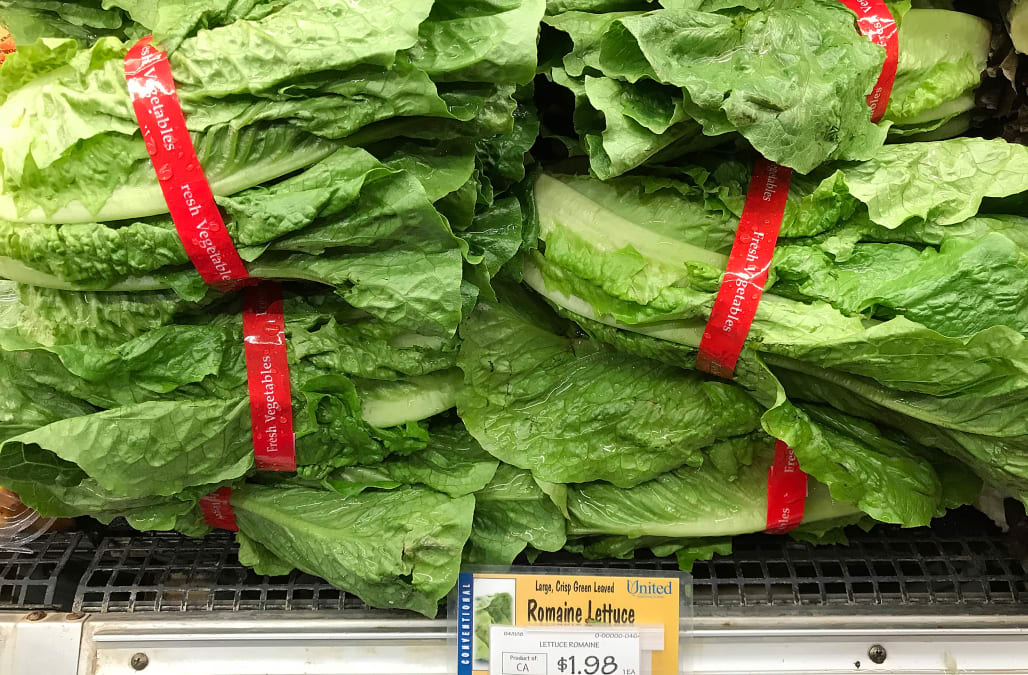 Illnesses linked to a deadly E. coli outbreak in romaine lettuce are continuing to rise, with 28 additional people found to have been sickened by the bacteria since last week, bringing the total to 149, health officials said.

As of this week, people in 29 states have fallen ill from consuming tainted lettuce traced to the Yuma, Arizona, region, the Centers for Disease Control and Prevention said on Wednesday. Investigators have failed to determine a more precise source of the bacteria, which is transmitted from human or animal feces.

Florida, Minnesota, North Dakota and Texas are the latest states reporting illnesses since the CDC’s previous update on May 2. The full list of states can be seen here or on the map above.

“Do not eat or buy romaine lettuce unless you can confirm it is not from the Yuma growing region,” the CDC warned. “Romaine lettuce has a shelf life of several weeks, and contaminated lettuce could still be in homes, stores, and restaurants.”

RELATED: 9 foods you didn't know were hurting your brain

9 foods you didn't know were hurting your brain

It’s no secret excess sugar isn’t exactly sweet where your health is concerned, but now new research indicates it may take a toll on your brain as well as your waistline. In one animal study, UCLA researchers found that rats fed a solution of fructose had a harder time navigating a maze, a sign of slowed learning and memory loss, compared to a second group of rats who were given the fructose solution as well as omega-3 fatty acids, which are thought to have a brain-boosting effect. The researchers suspect that the fructose-only diet decreased brain activity because it affected insulin’s ability to help brain cells use sugar to process thoughts and emotions. Certain omega-3 fatty acids may buffer the brain from the harmful effects of fructose. While this research is preliminary, it’s just general good health advice to minimize your intake of added sugar and up your consumption of foods rich in omega-3s, including walnuts, salmon, flax seeds and soybeans to your meals. Don't miss these other 11 scary things sugar does to your body.

Sorry, but switching to artificial sweeteners might not help your case. A 2017 study in the journal Stroke looked at diet patterns and incidents of stroke and dementia in more than 4,300 participants. Over ten years, those who drank the most artificially sweetened—but not sugar-sweetened—beverages were most likely to be diagnosed with dementia. Because it’s impossible to prove the link was caused by the beverages and not another source—for instance, those with diabetes might have been more likely to reach for artificial sweeteners—the study should be taken with a grain of salt (or sugar). Still, paired with these unhealthy effects of soda (including diet), the study is just one more reason to swap your soda for sparkling water. Learn more about why soda is so bad for your brain.

It’s not just the sugar you need to worry about. In a 2015 study, adults who reported eating the most trans fats per day had a harder time remembering which words they’d seen in a memory task. By this summer, most products will be required to remove trans fats from their recipes (and most companies have already cut them out), but trans fats might still be lurking in your pantry. Check the nutrition label, especially on shelf-stable frosting and other processed food, to make sure you’re in the clear. But dessert isn't all bad news: Research shows chocolate is good for your brain.

A diet high in “bad” saturated fat may hurt brain function, according to Harvard research published in the Annals of Neurology. When researchers studied the eating habits and tested the brain function of 6,000 women for an average of four years, they found the women who ate the most saturated fat scored lower on tests of brain function and memory. On the other hand, women who ate the most monounsaturated fats (found in foods like olive oil and avocado) had higher scores. You don’t need to shun saturated fat sources entirely, but choose low- or non-fat versions of animal products, such as cheese, yogurt, and milk. Avoid processed meat, like bacon, and stick to lean cuts. Get more protein from vegetable sources, like soy and legumes, plus swap for these other 25 brain-boosting foods that keep you sharp.

CHIPS, PIZZA, AND OTHER JUNK FOOD

Will junk food rot kids’ brains? A 2011 British study of nearly 4,000 children found that those who ate primarily junk food (lots of processed and fast food) at age three had a small drop in IQ five years later compared with children who ate healthier diets. (And the link remained after researchers accounted for confounding variables, such as socioeconomic status and parents’ education.) Early diet choices especially seemed to affect kids’ verbal abilities, according to Time. The study suggests that smart diet choices may be particularly crucial during early years of rapid brain development. It can be tricky to get young picky eaters to eat healthy foods, but remember that kids need repeated exposure (sometimes a dozen or more times) to “like” a new food. So don’t give up so easily! And many classic kid favorites, like string cheese and yogurt, make for healthy snacks instead of processed cookies and chips. Here are more of worst foods for your brain.

Does blowing that bubble boost or bust your brainpower? Here, the research is mixed. A recent British study published in the Quarterly Journal of Experimental Psychology found that chewing gum during a memorization exercise impaired participants’ short-term memories. The researchers believe the act of chewing may get in the way of concentrating on memory tasks (In this case, participants were asked to learn the order of items in a list) The finding contradicts previous research, which found a positive association between chewing gum and mental tasks. Because of mixed study results, you might not want to spit just yet. But be sure to include other brain-boosting habits in your daily routine, such as drinking water (dehydration can affect focus and acuity), getting plenty of sleep, and playing brain games.

Sorry, ketogenic diet: Ditching carbs can sap brainpower (along with energy and mood). A small Tufts University study of 19 women between the ages of 22 and 55 found that when dieters eliminated carbohydrates, they showed a gradual dip in cognitive skills (particularly on memory-related tests) compared to a group who stayed on a low-calorie diet that included carbs. Carbs aren’t evil—your body needs them for many important functions, including fueling your brain. So avoid diets that eliminate or severely restrict them, and choose healthy options, like whole grain pastas and breads, brown rice, and quinoa. Check out more of the best foods for your brain.

You already knew sodium could wreak havoc on your vascular system, but that’s just the beginning of the salt problem. A 2012 study found that older Canadian who ate the most salt and didn’t exercise had quicker cognitive decline than their low-salt counterparts, who actually improved over time. And it might not just be related to blood flow. Weill Cornell Medicine researchers fed mice eight to ten times higher than rodents normally eat, which was “comparable to the high end of the spectrum of human salt consumption.” Even when the salt didn’t affect their blood pressure, the mice eating the most salt lost their ability to find their way through a maze and eventually stopped responding normally, according to the results in Nature Neuroscience. To keep your brain and body healthy, stick to less than 2,300 milligrams of salt per day.

Sure, you might let some stupid things slip out when you’re drunk, but even moderate drinking could hurt your brain. A 30-year BMJ study found that adults who drank 14 to 21 units of alcohol (about seven to ten servings, depending on the size and strength of the drink) were more likely to have decline in the hippocampus—the part of the brain associated with long-term memory—than those who drank less. Heavy drinkers were at even bigger risk. The study only showed a link and didn’t prove drinking caused the cognitive decline; meanwhile, other studies have linked moderate drinking with health benefits such as lower risk of heart disease. Bottom line: weigh the risks before you imbibe. Don't miss these other surprising everyday things that mess with your brain.

“If you do not know if the lettuce in a salad mix is romaine, do not eat it,” the CDC advises.

Do not eat or buy romaine lettuce unless you can confirm it is not from the Yuma growing region."

The most recent reports of illnesses started on April 25, though the CDC noted it can take up to three weeks for a confirmed illness to be reported to federal officials. That suggests there could be additional cases that are not yet known to authorities. 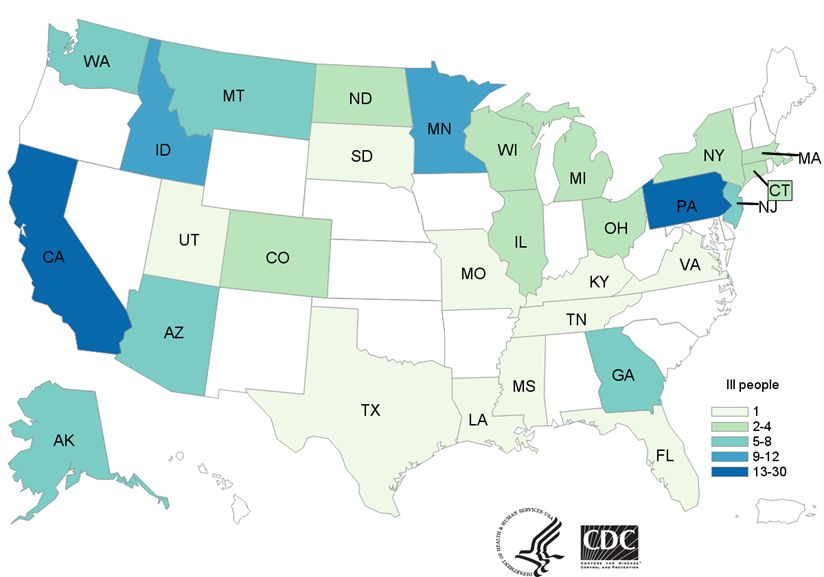 A total of 64 people have been hospitalized in the outbreak, including 17 who developed a type of kidney failure called hemolytic uremic syndrome. One death was reported in California, where the majority of the cases have been reported.

The strain of E. coli behind the outbreak is known as O157:H7, which produces a toxin that causes more severe illness, the CDC said.

The current outbreak is the worst since 2006 when E. coli contaminated spinach killed three people and sickened 199 others across 26 states.

More from HuffPost US:
U.S. climate scientists flee for France to 'Make Our Planet Great Again'
9 out of 10 air pollution deaths occur in developing countries, WHO study finds
Kangaroo dies after visitors at Chinese zoo hurl rocks to force her to jump