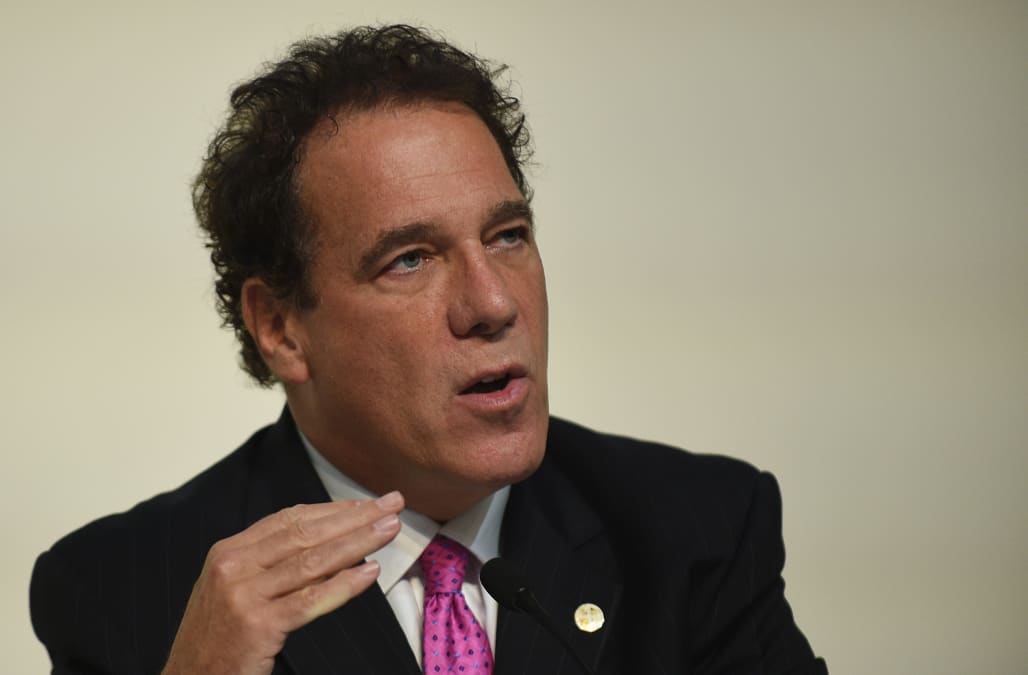 Kamenetz, 60, was at his Owings Mills home around 2 a.m. when he woke up not feeling well. He drove with his wife to a nearby volunteer fire station where he received emergency treatment before being transported to a hospital. He was pronounced dead shortly after, Baltimore County Fire Department spokeswoman Elise Armacost said at a news conference.

The two-term county executive is survived by his wife, Jill Kamenetz, and their two teenage sons.

“By all accounts, he appeared to be in excellent health. He went to a doctor regularly,” she said at the news conference, according to The Associated Press. “This was not a person who had unhealthy habits.”

It’s not clear why Kamenetz drove to a firehouse as opposed to calling 911, said Dr. Gail Cunningham, senior vice president of medical affairs at University of Maryland St. Joseph Medical Center, where he was treated.

“Obviously with these conditions, time is everything, but I don’t know for how long he was suffering from chest pains or symptoms before he chose to do that,” she said at the news conference, adding that people experiencing symptoms of a heart attack should call 911. In Kamenetz’s case, she said, it was determined he suffered from ventricular fibrillation, a life-threatening heart arrhythmia that is common among heart attack victims.

“Like so many, I am shocked and heartbroken by this sudden and unexpected loss. I want to thank those across Maryland for their outpouring of support, sympathy, and gratitude during this difficult time,” she said in a statement posted to their campaign’s website.

“Kevin was first and foremost a loving husband to his wife Jill and a proud father to Karson and Dylan. And he was a dedicated, bold leader who served the people of Baltimore County for over 20 years. I have been honored to call him a friend and partner. Today all of Maryland mourns with his family, friends, and loved ones,” she said.

Republican Gov. Larry Hogan, whom Kamenetz hoped to face off against in the November election, ordered the state flags to be flown at half-staff. He also expressed his condolences on Twitter.

The First Lady and I are shocked and grieved by the sudden passing of Baltimore County Executive Kevin Kamenetz. Our prayers go out to his family and many loved ones this morning.

Kamenetz’s fellow Democrats also spoke out about their heartbreak over his loss, as well as about his character and years of work as a public servant.

Kevin Kamenetz’s passing is a tremendous loss for Maryland. He was a dedicated public servant, and I considered him a friend. My heart goes out to Jill and his family, along with his many friends and staff.

He dedicated his life to public service, to making a difference, and he helped move Maryland forward.

My sincerest thoughts and prayers are with Jill and their two sons.

I’m shocked and saddened by the sudden passing of Kevin Kamenetz. One of the unexpected joys of this campaign had been getting to know Kevin’s wonderful wit and humor. His perspective and dedication will be missed. My sympathies go out to Jill and his entire family.

I’m shocked and saddened by the passing of Kevin Kamenetz. My family sends our deepest condolences to Jill, his kids, and the people of Baltimore County.

Condolences to his family were also shared by government officials and sports teams.

The Orioles mourn the sudden loss of Baltimore County Executive Kevin Kamenetz and send our condolences to his wife, Jill, and the entire Kamenetz family.

I am deeply saddened by the sudden death of County Executive Kevin Kamenetz. My heart is with his family and the entire Baltimore County community. Kevin dedicated himself to our community and his good works are all around us. He will be deeply missed.

Kevin Kamenetz was an energetic public servant who cared about making a difference for those he served. MD and I both just lost a friend.

"My thoughts and prayers go out to the family of County Executive Kevin Kamenetz. We are saddened and shocked by the news. Kevin was a tireless supporter of BCPS, and I am thankful for his commitment and dedication to the children of Baltimore County." -- @VerlettaWhitepic.twitter.com/VvuXr9VfON

Our hearts go out to Jill and their fine young sons. We mourn his passing and honor @kevinkamenetz - a wonderful public servant for decades. pic.twitter.com/TiJs5yMGqf

Awkward political moments between world leaders
U.S. President Donald Trump, right, extends his hand to Justin Trudeau, Canada's prime minister, during a meeting in the Oval Office of the White House in Washington, D.C., U.S, on Monday, Feb. 13, 2017. Trump's pledge to renegotiate the North American Free Trade Agreement and his support for a 'major border tax' threatens to disrupt $541 billion in trade between the two countries, potentially driving up costs and crimping profits for some of Canada's biggest companies including Suncor Energy Inc. and auto parts supplier Magna International Inc. Photographer: Kevin Dietsch/Pool via Bloomberg
U.S. President Barack Obama extends his hand to Russian President Vladimir Putin during their meeting at the United Nations General Assembly in New York September 28, 2015. REUTERS/Kevin Lamarque
Outgoinng leader Nigel Farage (L) embraces new leader of the anti-EU UK Independence Party (UKIP) Diane James (R) as she is introduced at the UKIP Autumn Conference in Bournemouth, on the southern coast of England, on September 16, 2016. Diane James was announced as UKIP's new leader on September 16 to replace charismatic figurehead Nigel Farage. Farage made the shock decision to quit as leader of the UK Independence Party following victory in the referendum on Britain's membership of the European Union. / AFP / Daniel Leal-Olivas (Photo credit should read DANIEL LEAL-OLIVAS/AFP/Getty Images)
377784 02: Vice President Al Gore kisses his wife Tipper Gore after accepting the democratic nomination for President of the United States on the the fourth and final night of the Democratic National Convention in Los Angeles, CA, August 17, 2000. (Photo by Robert Nickelsberg/Liaison
(L-R)Mexican President Enrique Pena Nieto, Canadian Prime Minister Justin Trudeau and US President Barack Obama pose for a group photo with Canada's Parliament Hill in the background during the North American Leaders Summit on June 29, 2016 in Ottawa, Ontario. / AFP / Chris Roussakis (Photo credit should read CHRIS ROUSSAKIS/AFP/Getty Images)
Japanese Prime Minister Shinzo Abe meets with U.S. President Donald Trump (R) in the Oval Office at the White House in Washington, U.S., February 10, 2017. REUTERS/Jim Bourg
US President Barack Obama (C) and US First Lady Michelle Obama welcome Italian Prime Minister Silvio Berlusconi to the G20 dinner on September 24, 2009 in Pittsburgh, Pennsylvania. AFP PHOTO/Jewel SAMAD (Photo credit should read JEWEL SAMAD/AFP/Getty Images)
President John F Kennedy of the USA greeting Soviet premier Nikita Khrushchev on his arrival for talks in Vienna. (Photo by Ron Case/Getty Images)
WASHINGTON, DC - JANUARY 27: British Prime Minister Theresa May with U.S. President Donald Trump walk along The Colonnade at The White House on January 27, 2017 in Washington, DC. British Prime Minister Theresa May is on a two-day visit to the United States and will be the first world leader to meet with President Donald Trump. (Photo by Christopher Furlong/Getty Images)
Cuban President Raul Castro (R) raises US President Barack Obama's hand during a meeting at the Revolution Palace in Havana on March 21, 2016. Cuba's Communist President Raul Castro on Monday stood next to Barack Obama and hailed his opposition to a long-standing economic 'blockade,' but said it would need to end before ties are fully normalized. AFP PHOTO/Nicholas KAMM / AFP / NICHOLAS KAMM (Photo credit should read NICHOLAS KAMM/AFP/Getty Images)
LONDON, ENGLAND - MAY 12: Prime Minister David Cameron (R) and Deputy Prime Minister Nick Clegg hold their first joint press conference in the Downing Street garden on May 12, 2010 in London, England. On his first full day as Prime Minister, David Cameron has made a series of cabinet appointments including Nick Clegg as Deputy Prime Minister. The Conservatives and Liberal Democrats have now agreed to lead the country with a fully inclusive coalition government. (Photo by Christopher Furlong - WPA Pool /Getty Images)
US Republican presidential candidate Donald Trump greets vice presidential candidate Mike Pence after his speech on day three of the Republican National Convention at the Quicken Loans Arena in Cleveland, Ohio, on July 20, 2016. / AFP / Timothy A. CLARY (Photo credit should read TIMOTHY A. CLARY/AFP/Getty Images)
U.S. President Barack Obama, left, Tony Abbott, Australia's prime minister, center, and Shinzo Abe, Japan's prime minister, shake hands while posing for photographs during a trilateral meeting at the Group of 20 (G-20) summit in Brisbane, Australia, on Sunday, Nov. 16, 2014. The U.S., Japan and Australia agreed to deepen security and defense cooperation agreements, according to a joint statement released today after a meeting of the three leaders in Australia. Photographer: Ian Waldie/Bloomberg via Getty Images
Up Next