2 miners dead, 3 missing after quake at Polish coal mine 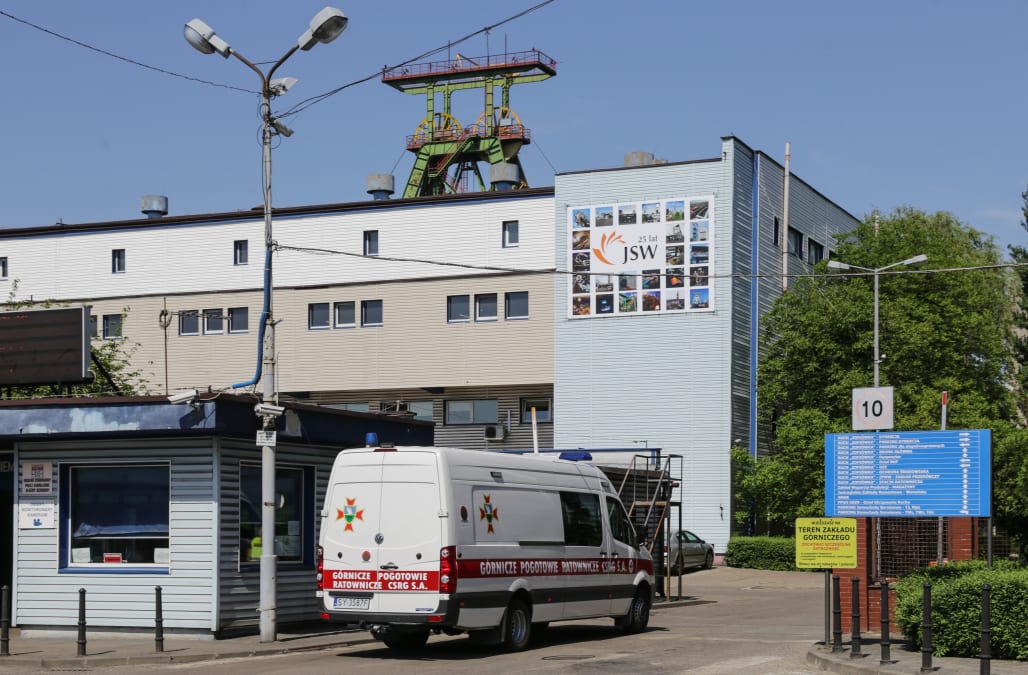 WARSAW, May 6 (Reuters) - Rescue teams have confirmed the death of a second Polish coal miner and are searching for three more trapped nearly a kilometer underground after a quake, the chief executive of the mine owner said.

The quake hit the Borynia-Zofiowka-Jastrzebie coal mine in southern Poland on Saturday morning, initially trapping seven miners at a depth of about 900 meters (2,950 feet). It was the mine's strongest quake going back to 1989.

Two miners were rescued on Saturday after the tremor caused part of the tunnel where they worked to collapse.

The energy released by the quake amounted to 40 percent of all energy released in the roughly 110,000 tremors recorded at the mine since 1989, Daniel Ozon, the chief executive of mine owner JSW, told reporters.

Ozon said that the quake had a magnitude of 3.5 to 4.0. Earlier estimates by state mining supervisor WUG put its magnitude at 3.4.

Coal use in China, one of the world's largest consumers, fell two percentage points in 2015, but was still 64% of the country's energy sources. Here a villager selects coal near a mine on the outskirts of Jixi, in Heilongjiang province, China.

Coal consumption in the EU was flat last year, after declining in 2014. Below, miners leave after working the final shift at Kellingley Colliery in December 2015. Kellingley was the last deep coal mine to close in England, bringing to an end centuries of coal mining in Britain.

Miners working about 1,640 feet underground at the Boleslaw Smialy coal mine, a unit of the coal miner Kompania Weglowa, in Laziska Gorne, Silesia, southern Poland, on September 11.

Coal miners breaking their fast during the holy month of Ramadan, 2,427 feet deep inside the Stara Jama coal mine, in Zenica, Bosnia and Herzegovina, on July 15.

Twelve-year-old Abdul Kayum from Assam pauses for a portrait while working at a coal depot carrying coal to be crushed on April 15, 2011, near Lad Rymbai, in the district of Jaintia Hills, India.

A miner waiting for a bus after leaving the Zasyadko coal mine in Donetsk, Ukraine, on March 4, 2015. Dozens of miners were trapped underground after a blast at the coal mine in the eastern Ukrainian rebel stronghold of Donetsk; 33 miners were killed.

Miners in 2014 preparing for their final working day at Hungary's last hard coal deep-cast mine at Markushegy. The underground mine, west of the capital city Budapest, stopped producing coal at the end of 2014, in line with a EU effort to shut down uncompetitive hard coal mines.

A laborer taking a break at a coal-dump site outside Mazar-i-Sharif, Afghanistan, in 2014.

Miner Mohammad Ismail, 25, digging in a coal mine in Choa Saidan Shah, Punjab province, Pakistan, in 2014.

Workers at this mine in Choa Saidan Shah in Pakistan dig coal with pick axes, break it up, and load it onto donkeys to be transported to the surface.

All in all, global demand for coal has stalled for the first time since the 1990s, according to the International Energy Agency, which expects coal's share of global power generation to fall from 41% now to 37% by 2020, even as use rises in India and Southeast Asia. Here, a worker carries a container filled with drinking water at a railway coal yard on the outskirts of the western Indian city of Ahmedabad.

Hundreds of coal-powered plants are slated for retirement in the US, where coal's share of energy generation was 36% in 2015, down from 50% 10 years prior. Here, coal miners enter a mine for the start of an afternoon shift near Gilbert, West Virginia.

Workers unload coal from a truck into a stock field in Cigading harbour in Cilegon, Banten province, in 2010. Domestic coal consumption has risen in Indonesia in recent years, jumping 15% to 87.43 million metric tons in 2015.

Steve Torgersen, a Norwegian mining expert, showing the size of a fossil footprint of a hippopotamus-like creature, a pantodont, on the roof of a coal mine on the Norwegian Arctic island of Spitsbergen in 2007.

A coal miner registering the quantity of coal produced by each miner on an improvised chalkboard inside an artisanal mine, or "pocito," at the town of Nueva Rosita, Mexico, in 2008. The mines, called "pocitos," or "little holes," are known for their rudimentary and often dangerous mining techniques.

Rescuers carrying a miner who sustained injuries after a mine explosion to an ambulance in Soma, a district in Turkey's western province of Manisa, about 75 miles northeast of the Aegean coastal city of Izmir, in 2014. In Turkey's worst mining disaster in decades, "a fire broke out [and] one of the pits was engulfed with carbon monoxide. It was Turkey's worst ever industrial accident: 301 miners died, some burnt alive, others suffocating," according to the BBC.

The two rescued miners were taken to a hospital in the city of Jastrzebie-Zdroj. They were in "relatively good condition" and could walk unaided, Ozon told reporters on Saturday.

About 250 people were working in the mine at the time of the quake, JSW said. The missing miners were from a team of 11 that was drilling a new tunnel. Four escaped by themselves.

Rescue operations was hampered by high levels of methane, which reached a concentration of up to 58 percent.

The state mining supervisor said the quake was a type that can occur in coal mines deposits are removed. (Reporting by Marcin Goettig and Pawel Sobczak; editing by Adrian Croft, Larry King)