Trump nominated for the Nobel Peace Prize by House Republicans 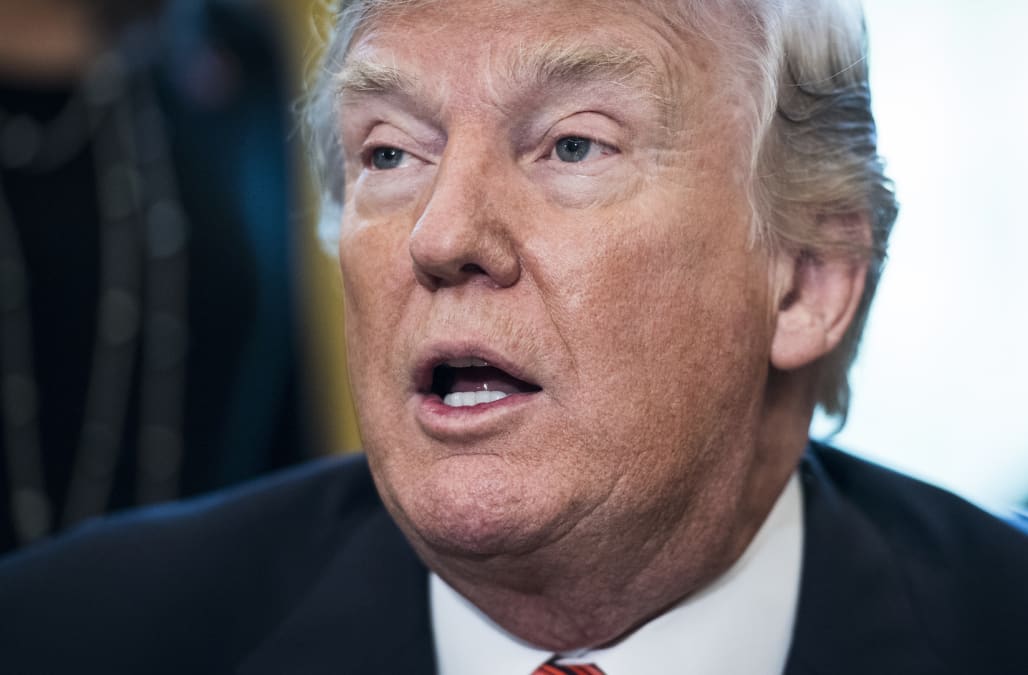 A group of 18 House Republicans has nominated President Donald Trump for the 2019 Nobel Peace Prize for his work on North Korea.

“Although North Korea has evaded demands from the international community to cease its aggression for decades, President Trump’s peace through strength policies are working and bringing peace to the Korean peninsula,” write the lawmakers in their nomination letter. “We can think of no one more deserving of the Committee’s recognition in 2019 than President Trump for his tireless work to bring peace to our world.”

Rep. Luke Messer (R-Ind.) is the leader of the effort, which he first proposed in March.

Trump has agreed to meet with North Korean leader Kim Jong Un, possibly in late May or early June. Mike Pompeo, Trump’s newly confirmed secretary of state, met with Kim in secret three weeks ago. At the time, Pompeo was the CIA director.

US-North Korea relations escalate in 1968
(Original Caption) 12/23/1968-Pammunjom, South Korea- Commander Lloyd Bucher, (L) captain of the captured U.S. intelligence ship, 'Pueblo,' leaves a press conference at a base camp near Pammunjom following his and his crew's release from North Korea after eleven months of captivity. Bucher is accompanied by U.S. Navy Public Information Officer, Captain Vince Thomas, (center), and a military policeman.
Commander Lloyd E. Bucher (left, back to the wall), commanding officer of the USS Pueblo, a Navy ship captured by North Korea in the Sea of Japan in 1968, answers questions during a naval court of inquiry. January 24, 1969. His counsel, E. Miles Harvey and Captain James E. Keyes, sit at a nearby table (right). (Photo by Nord Petersen/Library of Congress/Corbis/VCG via Getty Images)
PYONGYANG, NORTH KOREA - APRIL 20: North Korean navy ratings guard the USS Pueblo, an American spy ship, on the river Taedong in central Pyongyang 16 April 2001. The ship was attacked and captured in January 1968 and the crew held for 11 months. It has now become a symbol of a new anti-US propaganda battle. According to North Korean state media, growing numbers of people visit the ship to show their anger at US policy toward the communist state. AFP PHOTO (Photo credit should read TIM WITCHER/AFP/Getty Images)
Crew members of the US Navy spy ship 'USS Pueblo' cross the Bridge of No Return between North and South Korea, after their release into US custody, 23rd December 1968. They had been seized by North Korean forces on 23rd January of the same year. Official US Navy Photo by PH2 T. K. Reynolds, USNR. (Photo by Pictorial Parade/Archive Photos/Getty Images)
(Original Caption) Comdr. Lloyd Bucher, the Pueblo's captain, appears at a press conference in Pyongyang, North Korea, 9/12/68. At the press conference, members of the Pueblo's crew explained the ship's mission and described its capture. The newsfilm from which these pictures were made was shot by the North Korean news agency.
(Original Caption) Major General Pak Chung Kuk, North Korean Army, across table from Rear Admiral John V. Smith, U.S. Navy, during 262nd meeting of the Armistice Commission.
Korean Guard looks out window with binoculars. | Location: Pamunjom, Korea.
(Original Caption) President Johnson confers with Defense Secretary McNamara during a meeting of the National Security Council at the Executive Mansion 1/24, in this photo released by the White House. The Council discussed the seizure on the high seas of the USS Pueblo by North Korea.
(Original Caption) As the news came in that President Johnson had ordered 14,787 Air Force and Navy Reservists to active duty January 25th, William D. Jackson of Brooklyn (right) entered the US Air Force recruiting station at Times Square and talked about enlisting. Chatting with him is Technical Sgt. Steven L. Ramirez. The United States called, January 25th, for an urgent meeting of the United Nations Security Council to consider 'the grave situation' arising from the seizure of the intelligence ship 'Pueblo' by North Korea.
Algerian Ambassador to the United nations Tewfik Bouattoura (left) listens during a UN Security Council meeting addressing the international inicdent involving North Korea's capture of an alleged American spy boat, the USS Pueblo (AGER-2), New York, New York, late January 1968. (Photo by Al Fenn/The LIFE Images Collection/Getty Images)
The U.S.Aircraft carrier ENTERPRISE, 75,700 tons, the world's largest warship which carries about 100 planes, and which is reported to be sailing towards North Korea following the seizure of America's spy ship 'Pueblo' in international waters. (Photo by PA Images via Getty Images)
Officers and crew of the United States Navy ship USS Pueblo being led away after being captured by North Korean forces in international waters in the Sea of Japan during the Vietnam War.
(Original Caption) Senator J. William Fulbright (D-Arkansas), Chairman of the Senate Foreign Relations Committee, following a 3-hour meeting of his committee 1/24, said a decision on whether to order a full scale investigation into the Tonkin Gulf attack had been postponed. Fulbright said he felt the Administration should 'be very careful' in its response to North Korea's seizure of the USS Pueblo.
NORTH KOREA - JANUARY 01: North Korea. Discovery of weapons and bodies of a United Nations commando force which entered illegally into North Korea. (Photo by Keystone-France/Gamma-Keystone via Getty Images)
(Original Caption) 1/2/1968-Along the Western Truce Front, Korea- U.S. troops manning the western tip of 151-mile Korean truce front have recently completed a 15-mile fence as part of a new security system along the Korean Demilitarized Zone. Constructed of iron poles and barbed wire, the fence- it is hoped -will keep North Koreans from smuggling agents into the South.
Commander Lloyd Bucher is greeted by his wife, Cindy, upon returning from captivity in North Korea. He and his crew aboard the USS Pueblo were captured in January 1968. (Photo by James L. Amos/Corbis via Getty Images)
Up Next

But Trump had also ratcheted up tensions with North Korea. White House officials contemplated striking the country, and he and Kim traded insults.

The letter comes just days before Messer faces a big primary. On Tuesday, Indiana voters will decide whether they want him to be their GOP nominee for U.S. Senate. Much of the race has been about the candidates trying to prove how much they’re like Trump. Messer has pitched himself as a “conservative who supports the Trump/Pence agenda” and this Nobel Prize push gives him an additional talking point.

The winner of Tuesday’s primary will face Sen. Joe Donnelly (D) in November.

President Barack Obama was awarded the Nobel Peace Prize in 2009, less than one year into his first term ― an honor that infuriated conservatives. The Norwegian Nobel Committee pointed to “his extraordinary efforts to strengthen international diplomacy and cooperation between peoples” and “attached special importance to Obama’s vision of and work for a world without nuclear weapons.”