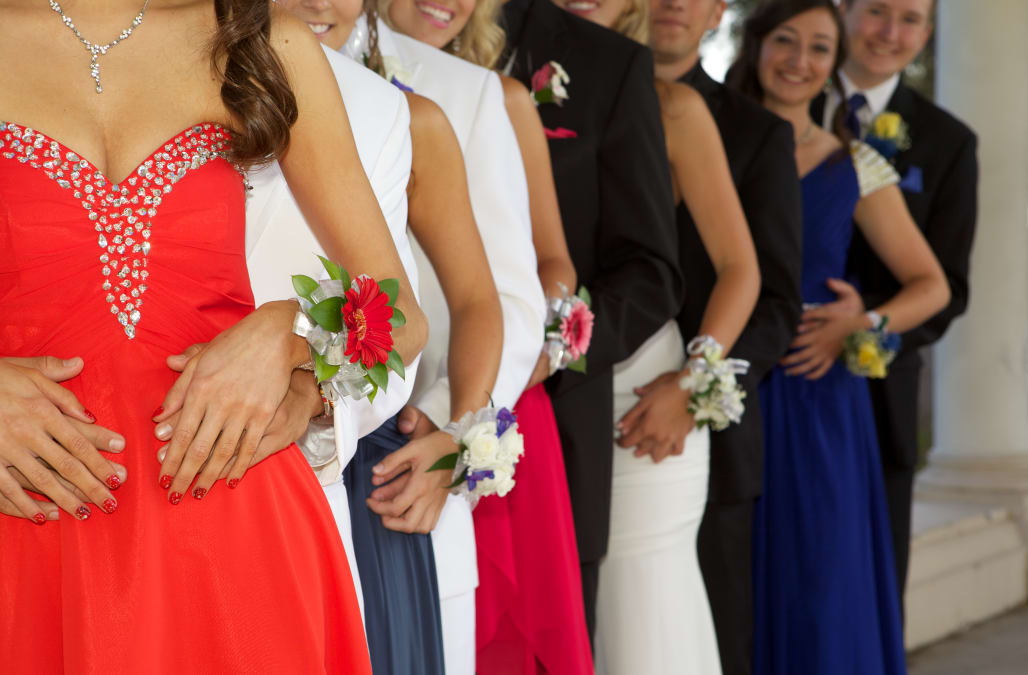 A Catholic high school in Dearborn, Michigan, has come under fire for its plan to pass out “modesty ponchos” to female students if their dresses are deemed inappropriate at their upcoming prom dance.

The colorful modesty ponchos appeared on mannequins in the halls of Divine Child High School on Monday morning. The ponchos look similar to rain ponchos and, according to a note left on a mannequin, are available in “short and long styles.”

“If your dress does not meet our formal dance dress requirements ― no problem! We’ve got you covered ― literally. This is our Modesty Poncho, which you’ll be given at the door,” a note attached to another mannequin reads.

The modesty ponchos came under swift criticism from students and parents alike, forcing the school to backtrack in a letter sent to the school community Tuesday.

High school principal Eric Haley wrote in the letter that the ponchos were not meant to make students feel uncomfortable and were meant “to remind all students and parents of our formal Prom dress policy.”

“To be clear: The poncho will not be passed out at Prom. It was on display to proactively remind students of our dress code policies and eliminate any confusion prior to this special event,” Haley wrote to students and parents. “We recognize that it has done the opposite for some members of our community and draws away from our goal of having students adhere to the dress code policy.”

Students at a high school in Dearborn will be evaluated by teachers before prom. If their dresses aren't appropriate, they'll be given a Modesty Poncho:https://t.co/N0TGp5KJompic.twitter.com/CuTW57M4ya

According to the school’s dress code, obtained by local news outlet Fox 2, female students cannot wear low necklines or “cutouts below the traditional bra line” to the May 12 prom dance.

The modesty ponchos were created by theology teacher Mary Pat O’Malley, who said she hoped the poncho would help people see “inner beauty.”

“We are trying to focus on the inner beauty of people and not draw attention to something that doesn’t really need to have attention drawn to it,” she said. “It’s really intended as a deterrent — and a lighthearted one at that.”

An anonymous Divine Child student told Fox 2 on Monday that she thought the school had “gone very far” with the ponchos and was not comfortable attending her own prom.

A parent added that the poncho would body-shame young girls.

“It’s a method of shaming, a method of building and degrading to females and its interpretation what’s modest and what isn’t,” the anonymous parent told Fox 2.

While the modesty ponchos will no longer be handed out at prom, Haley wrote that teachers will “provide wraps and shawls” ― as the school has done at past events ― to female students if necessary.

Smell as sweet as a daisy all night long!

Minimize how many products you need to carry around thanks to this double-sided lipstick and balm duo.

Be prepared for any dancing-induced blisters -- shout out to your new shoes!

Don't let your beautifully done hair fall apart through out the night.

From the drinks to the food to the slow dances, keep your breath fresh throughout prom.

Keep the shine away thanks to oil blotting sheets -- one of our favorite beauty secret weapons.

These pens will help you avoid a major melt down if your date spills the punch on you.

Pack a few safety pins for any wardrobe mishaps that may go down.