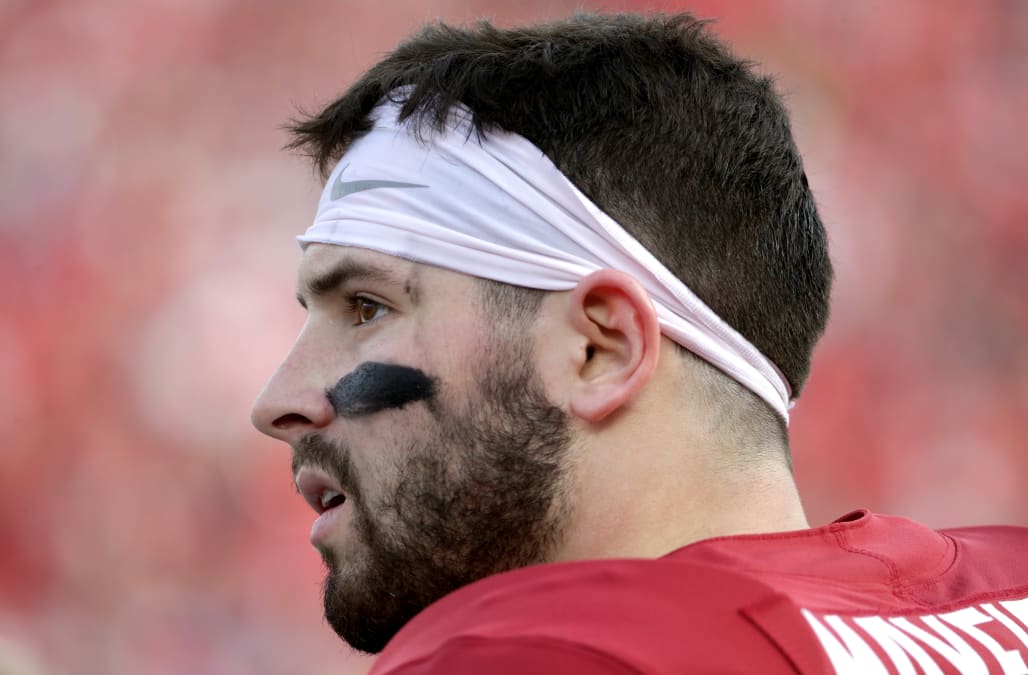 Not since 2006 -- when the Houston Texans signed Mario Williams on draft day eve despite widespread belief they would take Reggie Bush -- has the team picking first truly shocked us during draft week.

Seven of the last 11 top overall picks have been quarterbacks, and each was a clear favorite or virtual lock well in advance. In three of the last six years (2016, 2015 and 2012), the No. 2 pick was also all but official.

But days away from action getting underway in Dallas, we still aren't sure what the Cleveland Browns will do. Many favor USC's Sam Darnold, but others insist general manager John Dorsey will take Wyoming's Josh Allen. There are even whispers it could be Oklahoma's Baker Mayfield.

Things aren't much more settled at No. 2. The New York Giants don't seem likely to take a QB, but it's possible. If not, Saquon Barkley, Bradley Chubb and Quenton Nelson are all in play, and the specter of a trade remains a constant.

The only thing seemingly written in stone is that the New York Jets will take a QB at No. 3. But which one?

It's time to embrace the unknown in what could be one of the most fascinating drafts in years.

Despite GM John Dorsey's history of swinging for the fences, Darnold is the pick. The 20-year-old brings tremendous upside without nearly Josh Allen's level of bust potential.

The Buffalo Bills offer a treasure trove of picks, but Dave Gettleman has no history of trading down. Chubb isn't the hog molly Quenton Nelson is, but he could step right in for traded DE Jason Pierre-Paul and thrive.

With Darnold gone, we get introduced to "Broadway Baker." A relentless competitor, Mayfield should push Josh McCown and Teddy Bridgewater for the starting job early.

The Browns might love Chubb, but he's not available. Ward is small, but he plays physical and is almost as sticky as they come in man coverage.

A Bills trade up for a quarterback seems to be a matter of "when," not "if," and Allen looks like the likely target. Despite lots of homework on signal-callers, Denver seems to be angling for a trade down.

Saquon Barkley's slide makes this interesting, but the Colts still appear to be seeking another trade down, so I'll stick with this pick. The Dolphins jump up to grab an intellectual precision passer for Adam Gase.

Need and value line up perfectly here for the Bucs, who sprint to the podium. Barkley steps right in for the departed Doug Martin and should be a top-five NFL back from Day 1.

Nelson's college position coach, Harry Hiestand, recently joined the Bears, who have a hole at left guard after releasing Josh Sitton. A perfect fit for one of the best guard prospects in years.

With Reuben Foster's future very much up in the air, the Niners lock in an instinctive linebacker who will set the defensive tone for years to come.

Defensive help is far more pressing, but with Ward and Smith off the board, the Raiders fill the only hole on their offensive line and plug in a steady starter at right tackle.

After nabbing yet another second-rounder (giving them a whopping five picks in the top 49) in another trade-down, the Colts opt for one of the draft's best athletes. James and Malik Hooker could be an incredible duo.

Ward and Smith are potential targets, but with both off the board, Denver opts for a 19-year-old athletic freak. Edmunds needs polish and coaching, but his gifts are exceedingly rare.

A leaky run defense must be patched, and there's no better place to start than a behemoth like Vea. He's the rare 350-pounder who could also affect quarterbacks on a regular basis at the next level.

The Packers' recent investments in the secondary have yet to pan out, and the team already gave up on Damarious Randall. Fitzpatrick could be a rich man's Micah Hyde, thriving in all sorts of positions.

The Cardinals need a QB, but Lamar Jackson seems like an odd fit. Instead, they take the extremely agile and feisty Alexander to play opposite Patrick Peterson.

Was the offer sheet to Willie Snead a sign the Ravens won't take a wide receiver early, or a well-timed smokescreen to get other teams off the scent? I'll go with the latter and trust Ozzie Newsome's love for the Crimson Tide.

Sporting a roster with surprisingly few holes, L.A. must get better against the run, making Payne and fellow Tide defender Rashaan Evans ideal options. The 20-year-old Payne still has plenty of untapped upside.

The Seahawks might trade down, but pass rush is needed considering the departure of Michael Bennett and uncertainty surrounding Cliff Avril. Landry might be the best edge bender in the class.

Calvin Ridley and D.J. Moore are possibilities here, but Dallas opts to reinforce the secondary instead, where Jackson could wind up playing safety.

The Lions need more pass rush, especially with Ezekiel Ansah's long-term future unclear. Davenport might not slip this far, but Detroit should pounce if he does.

The Bengals' line was a sieve in protection in 2017, and even worse in the run game. A left tackle in college, Wynn will likely kick inside to guard, but he should be very reliable.

With the second of two first-round picks acquired from the Bills, the Broncos find a plug-and-play mauler to fill a hole at right guard.

It's unclear if the Patriots could move up high enough for Rosen, while Jackson might not even make it to No. 23. Either way, they should prioritize finding a long-term option at quarterback.

Greg Olsen is 33 and coming off an injury-plagued season, with little behind him on the depth chart. Goedert dominated lower-level competition and could become an excellent two-way tight end.

Leighton Vander Esch could be in consideration here as well. Either way, Tennessee could use a three-down linebacker who has both physicality and speed, and Evans can rush the passer a bit, too.

Josh Hill is entering a contract year, and 37-year-old Ben Watson signed for just one year. Hurst is a solid blocker and receiver, though Mike Gesicki could be the pick if New Orleans prefers a pure pass-catcher.

There have been whispers about a neck issue for Vander Esch, but he remains a talented, three-down linebacker. Pittsburgh must shore up the position with Ryan Shazier's future unclear.

A sixth QB in Round 1? It could happen. The Jaguars kicked the can down the road with Blake Bortles, but they must provide competition at some point. Rudolph faces a steep transition from Mike Gundy's offense but was super productive in college.

The Vikings let Tom Johnson and Shamar Stephen depart in free agency and signed Sheldon Richardson for just one year. The incredibly disruptive Hurst would provide some insurance at 3-technique.

Miller's tape isn't first-round caliber, but uber athletic tackles usually get overdrafted. New England has a need, and Miller might remind them of the departed Nate Solder.

The Eagles have few holes to fill, so they opt for a dynamic weapon. Powerful, agile and quietly talented as a pass-catcher, Guice would serve as insurance for Jay Ajayi, who is entering a contract year.