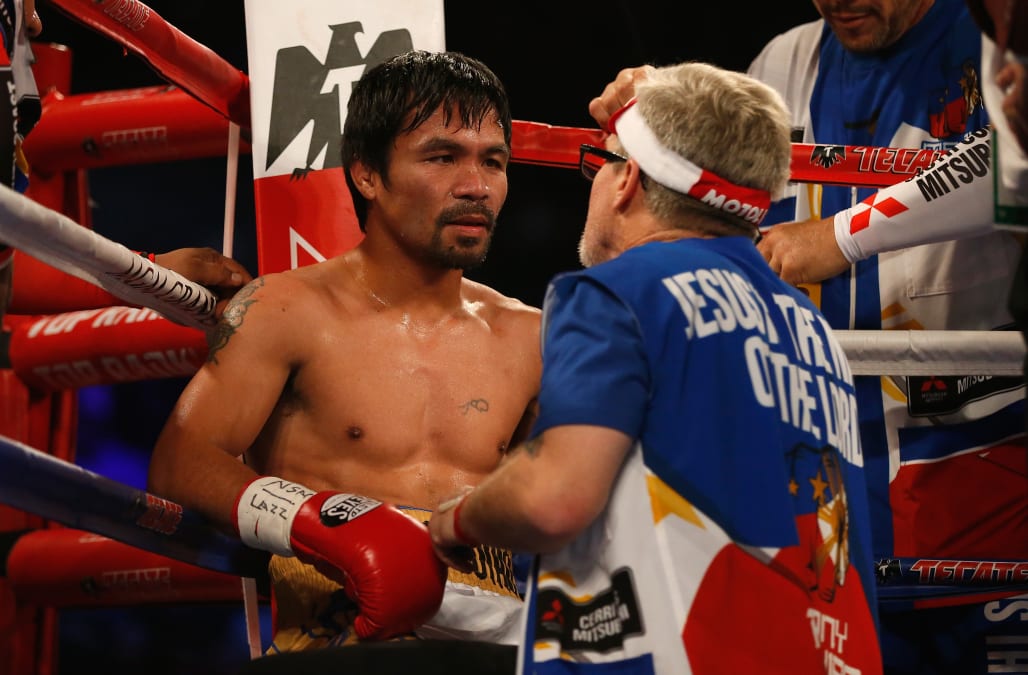 Freddie Roach found out he'd been fired by Manny Pacquiao at the same time as the rest of the boxing industry — when he read the press release last week.

They trained together at Roach's world famous Wildcard Boxing Club in Hollywood, California, and also in Manila in the Philippines, where Pacquiao would sometimes begin his training camps.

But that relationship has come to an end. Roach told Yahoo Sports that he "can't be mad" as they "had a great long run together," but stressed that the way he found out was "disappointing."

"I heard it like everyone else and that’s the thing that is a little disappointing, but my thoughts mostly are about all the good times we had and the work we did together.

"When Manny Pacquiao walked through my door, it changed my life. He made me a better trainer and a better person and of course, I’m a lot more famous now and I’m a lot richer than I was."

Take a look back at some of Pacquiao's fights:

Roach once advised Pacquiao to give up boxing

Yahoo Sports speculates that Pacquiao was "bothered" by Roach's comments after the Filipino fighter's loss to Jeff Horn last year. Roach warned Pacquiao he would struggle to juggle being a full-time athlete with his duties as a senator of the Philippines and said he should consider leaving the sport.

"I told him that the way his career is going, being a leader in his country and being a senator and dealing with all the responsibilities that come with that, he might have to give up boxing," Roach told Yahoo. "Boxing is a very physical sport and a very rough sport and having two jobs like he has is so tough. He’s just always going like crazy."

He added: "Being a prize fighter is difficult but being a world champion prize fighter is so incredibly difficult. It takes just about all of your time and focus and energy, and I just can’t imagine being able to do it and having another job. That’s how hard it is.

"I didn’t know Manny was mad about that when I said it. I wish he had said something to me about it so we could have spoken. My opinion hasn’t changed, but I wish we could have spoken to each other. But I have no complaints because my life is so much better in so many ways because of Manny Pacquiao."

Pacquiao returns to the boxing ring on July 15 when he challenges Lucas Matthysse for the WBA welterweight world title in Kuala Lumpur. He does so without Roach and will instead be trained by Buboy Fernandez, Pacquiao's long-time friend.

Roach says the match will be a good fit but advised Fernandez to lose weight. "He’s had some success locally and he’s good on the mitts. I’d like to see him lose some weight and get into better shape so he can work harder, but I think he’ll be fine."

NOW WATCH: What it takes to be an NBA referee