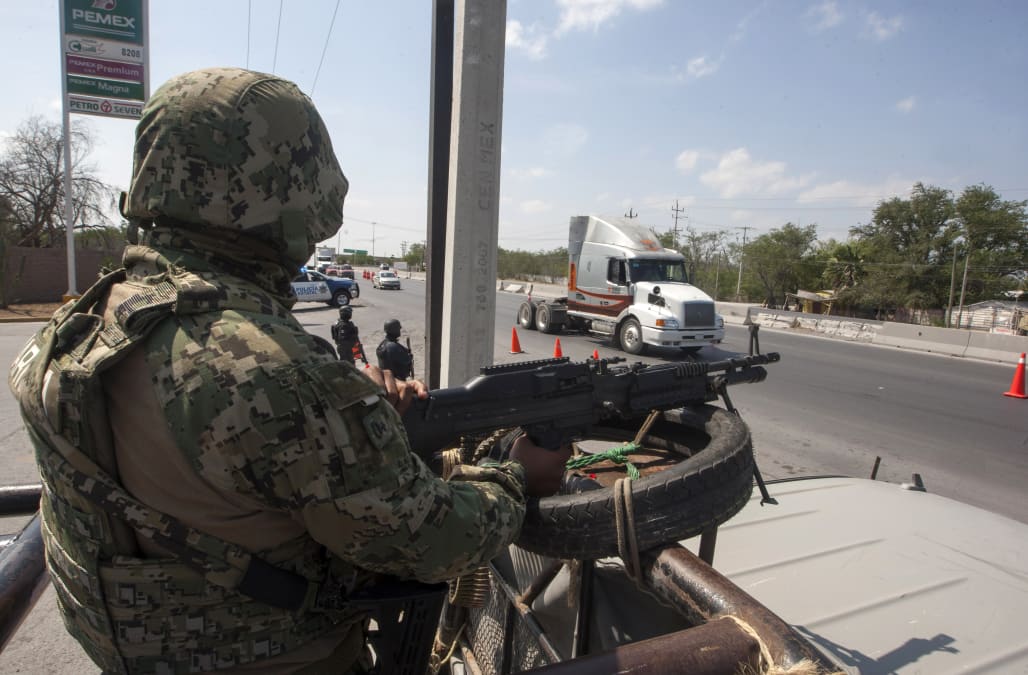 April 7 (Reuters) - The Texas National Guard has begun deploying troops to help secure the state's southern border with Mexico as President Donald Trump has been unable to get the U.S. Congress or Mexico to fully fund his proposed wall along the border.

The deployment, announced on Friday by Texas officials, comes after Trump directed Defense Secretary James Mattis to request the use of National Guard personnel to help the Department of Homeland Security secure the border in four southwestern U.S. states, including Texas.

Mattis on Friday authorized the funding for up to 4,000 National Guard troops for the operation through Sept. 30, a Department of Defense memo showed.

The troops will be under the "command and control" of their respective governors, it said.

Trump has failed so far to persuade either the Mexican government or the U.S. Congress to fully fund a wall he wants to build along the border. Mexican President Enrique Pena Nieto on Thursday sharply rebuked Trump over the plan.

The Texas Army National Guard said 250 guardsmen along with aircraft, vehicles and surveillance equipment were to be deployed along the state's border with Mexico within the next 72 hours.

Exact details of the mission, including the total number of troops to be deployed and the cost, were yet to be determined, Brigadier General Tracy Norris, commander of the Texas Army National Guard, told a news conference.

Photos of the week: 3/30 - 4/6
San Mateo County SWAT team officers are seen near Youtube headquarters following an active shooter situation in San Bruno, California, U.S., April 3, 2018. REUTERS/Elijah Nouvelage
KYANGWALI, UGANDA - APRIL 03: Young refugees from the Democratic Republic of Congo wait to be processed at the Kagoma reception centre on April 3, 2018 in Kyangwali, Uganda. More than 65,000 people have arrived in Uganda from the Democratic Republic of Congo since the beginning of 2018 as they escape violence in the Ituri province. The majority of refugees are arriving by boat across Lake Albert, which lies between the two countries. With refugee settlements in Uganda almost at maximum capacity there are plans for new settlements to be built to deal with the continuing influx of people. A cholera outbreak in the settlements has left at least 36 dead and many hundreds severely affected. Fighting in DRC between the Hema and Lendu communities has seen villages being burnt and dozens killed in the fresh outbreak of violence. (Photo by Jack Taylor/Getty Images)
WASHINGTON, DC - APRIL 04: Jo-Lynn Gilliam (C) of East Point, Georgia, sings 'This Little Light of Mine' with thousands of others on the National Mall during a prayer rally to mark the 50th anniversary of Dr. Martin Luther King Jr.'s assassination April 4, 2018 in Washington, DC. Organized by A.C.T. To End Racism, religious leaders and others gathered to memorialize the day that Nobel Peace Prize and American civil rights leader King was killed while supporting a sanitation workers strike in Memphis, Tennessee. (Photo by Chip Somodevilla/Getty Images)
Teachers pack the state Capitol rotunda to capacity, on the second day of a teacher walkout, to demand higher pay and more funding for education, in Oklahoma City, Oklahoma, U.S., April 3, 2018. REUTERS/Nick Oxford TPX IMAGES OF THE DAY
US President Donald Trump, with First Lady Melania Trump, speaks during the annual Easter Egg Roll at the White House in Washington, DC, on April 2, 2018. / AFP PHOTO / NICHOLAS KAMM (Photo credit should read NICHOLAS KAMM/AFP/Getty Images)

A shark swims near a police boat off the coast of South Australiain this March 31, 2018 photo obtained from social media.

In Arizona, some 150 National Guard members will be sent to the border next week, Arizona Governor Doug Ducey said in a Tweet on Friday.

Nielsen said this week that the troops would not be involved in law enforcement.

See Also: Trump's lawyers are reportedly getting him ready to face Mueller

In a supporting role, possibly for aerial reconnaissance, the Guard will help U.S. Customs and Border Protection personnel with stopping illegal immigrants from entering the country, Nielsen said.

In keeping with a theme he often invoked as a candidate in 2016 and has continually returned to since taking office, Republican Trump has sharpened his anti-immigrant rhetoric, warning that illegal immigrants threaten U.S. safety and jobs.

"It sounds to me more like political rhetoric than something that is actually needed on our border," Representative Vicente Gonzalez, a Texas Democrat whose district includes the border city of McAllen, told the New York Times.