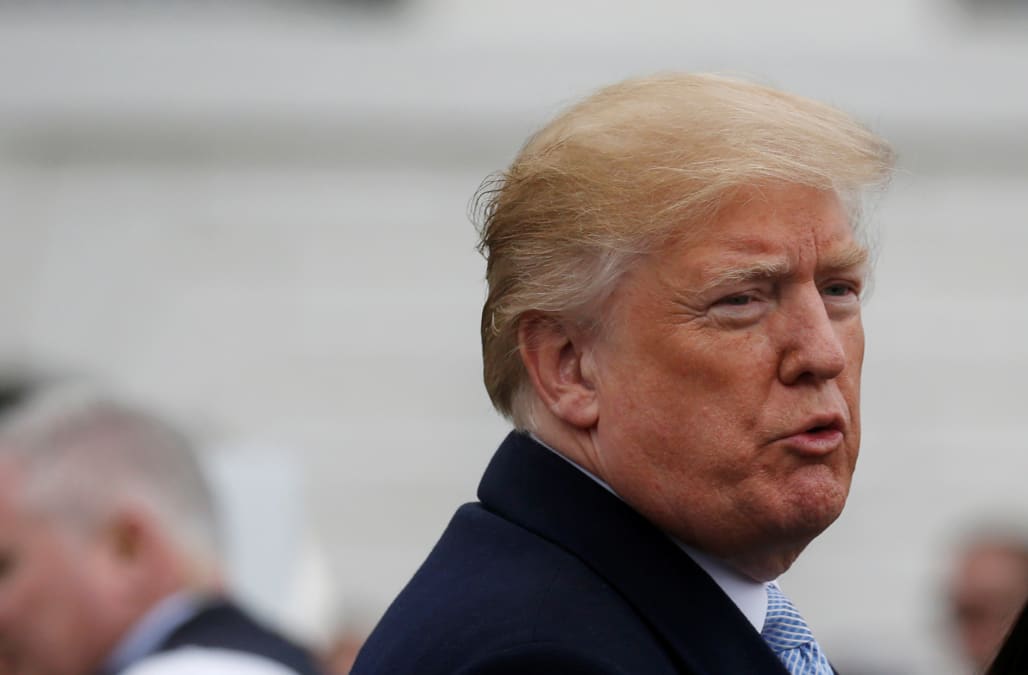 President Donald Trump continued his offensive on Tuesday against CNN, NBC, ABC, and CBS while defending Sinclair Broadcast Group, which was recently revealed to have forced anchors at local news stations to have read a speech about "false news," one of Trump's pet causes.

"The Fake News Networks, those that knowingly have a sick and biased AGENDA, are worried about the competition and quality of Sinclair Broadcast," Trump tweeted, saying that CNN, NBC, ABC, and CBS "have done so much dishonest reporting that they should only be allowed to get awards for fiction!"

"Check out the fact that you can’t get a job at ratings challenged @CNN unless you state that you are totally anti-Trump?" Trump continued. He then referred to CNN's owner, Jeff Zucker as "Little Jeff Zuker, whose job is in jeopardy."

"They should clean up and strengthen CNN and get back to honest reporting!" Trump concluded.

Check out the fact that you can’t get a job at ratings challenged @CNN unless you state that you are totally anti-Trump? Little Jeff Zuker, whose job is in jeopardy, is not having much fun lately. They should clean up and strengthen CNN and get back to honest reporting!

Trump has taken up defending Sinclair since a report in Deadspin exposed the group, which is the largest owner of local news TV stations, as having forced 200 anchors to repeat almost verbatim a speech about "false news."

"Sinclair's fake-news zombies should terrify you" an editorial at CNN read responding to the news, likening the event to George Orwell's cautionary tale of dystopia and state-controlled media, 1984. The editorial described the anchors as "echoing President Trump's dishonest attacks on the media."

But Sinclair's address didn't target any specific media outlets or stories. In an internal memo discussing the media group's practices obtained by CNN Money, Scott Livingston, a Sinclair senior vice president said the company's message was targeting unsubstantiated stories like the pope endorsing Trump or the "Pizzagate" controversy — two that circulated on social media before the 2016 US presidential election.

CNN itself has acknowledged that fake news is a problem, and sought to distance itself from falsehoods in reporting with an ad campaign that emphasized the importance of simple facts.

Additionally, the practice of Sinclair, the mother company, distributing identical scripts to a local news anchors is not a new practice.

In 2012, the Conan show uncovered a similar trend about a seemingly innocuous story, wherein dozens of anchors repeated the same intro to a story about ice cream phone apps, saying "I scream, you scream, well, you know the rest."

But the viral speech about "false news" seems to have struck a chord as it echoed one of Trump's main concerns and talking points, that the media is biased.