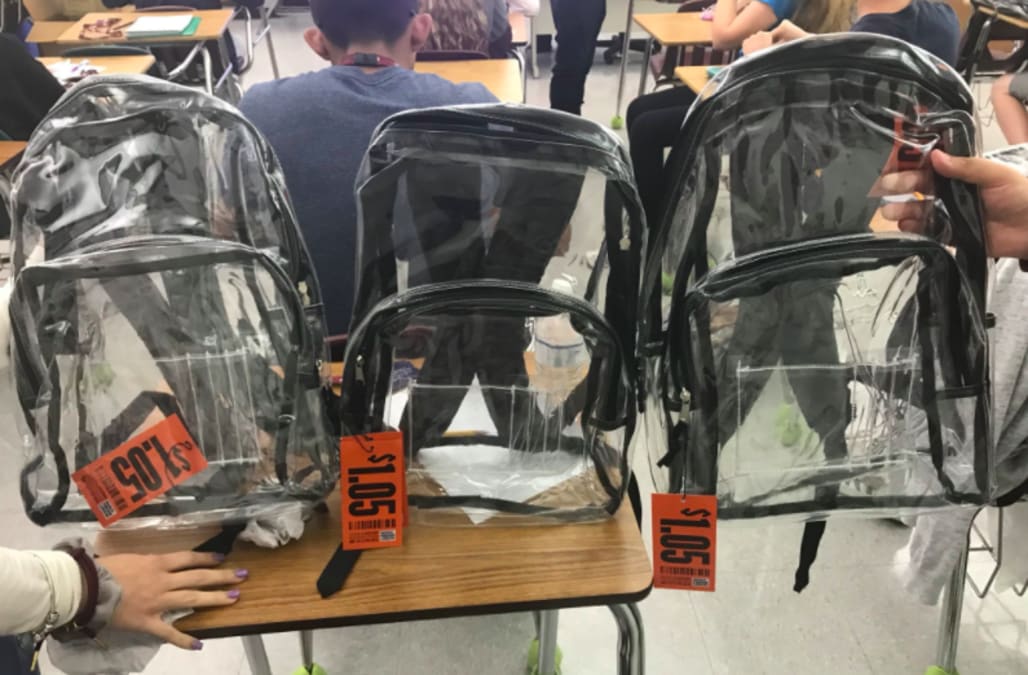 Students returning from spring break to Marjory Stoneman Douglas High School in Parkland, Fla., on Monday were greeted with metal barriers and clear backpacks — new safety measures enacted in the wake of last month’s mass shooting at the school.

More than 3,000 translucent backpacks and lanyards for identification cards were distributed to Stoneman Douglas students on Monday morning. Students were told to report to school without backpacks. Those carrying sports equipment or band instruments were asked to leave them with teachers or coaches before the start of classes. Extra police officers have also been stationed at the school since the Feb. 14 massacre.

School officials say the mandatory backpacks and entry checkpoints are temporary, part of pilot safety program that may be enacted throughout the school district.

Many students mocked the backpacks in social media posts, with some attaching orange tags emblazoned with “$1.05” — an amount they say they derived by dividing the number of students enrolled in Florida’s schools by the money Republican Sen. Marco Rubio has received from the National Rifle Association.

Parkland students return from spring break to clear backpacks
Starting off the last quarter of senior year right, with a good ol’ violation of privacy! https://t.co/Glf9C14dsq
:) @marcorubio https://t.co/eBmB9Tz9uB
.@marcorubio https://t.co/yxuXCRGCiE
This backpack is probably worth more than my life #trends #NeverAgain https://t.co/sVAfRbt12R
MSD ➡️ TSA https://t.co/3k1xMq9UDk
My new backpack is almost as transparent as the NRA’s agenda. I feel sooo safe now. As much as I appreciate the… https://t.co/elIbobMVad
Nothing beats a morning walk through fenced lines with a bag check! Where am I, again? https://t.co/6gDPs8zZ3Q
You have to get pre-check next time https://t.co/YO5UWaDWUd
General consensus is frustration from students and teachers re: clear backpacks. Personally, though, I don’t mind t… https://t.co/mTLawgoDyI
This new “school security” policy is just a late April fools joke, right? Cause none of us are laughing and it’s pretty terrible.
This is literally so dumb. The clear backpacks and check points create this false sense of security. Anyone can eas… https://t.co/2RRhqPfx0T
Me and my man Thomas Jefferson feel safe now ! https://t.co/XNIkXjdguB
But how satisfying would it be to put glue all over this backpack and peel it off https://t.co/vfFwIKlaAL
Up Next

“My new backpack is almost as transparent as the NRA’s agenda,” Lauren Hogg, a Stoneman Douglas freshman and younger sister of March for Our Lives organizer and senior David Hogg, tweeted. “As much as I appreciate the effort we as a country need to focus on the real issue instead of turning our schools into prisons.”

My new backpack is almost as transparent as the NRA’s agenda.

As much as I appreciate the effort we as a country need to focus on the real issue instead of turning our schools into prisons. #clearbackpacks#MarchForOurLivespic.twitter.com/HqBIeGjzF9

Others compared the pre-school check-in procedure to TSA lines at airports.

“This is literally so dumb,” Natasha, a junior, tweeted. “The clear backpacks and check points create this false sense of security. Anyone can easily hide a weapon in their pants or in a folder/binder.”

This is literally so dumb. The clear backpacks and check points create this false sense of security. Anyone can easily hide a weapon in their pants or in a folder/binder.

In a letter to Broward County Schools Superintendent Robert Runcie, Holden Kasky, a special needs student at Stoneman Douglas, asked that school officials reconsider the see-through backpacks because, among other things, “it’s uncomfortable to girls ’cause girls have more private stuff/bathroom stuff.”

@RobertwRuncie Dear Supt. Runcie, I am posting this at the request of my son Holden Kasky (9th gd ESE), who, for the reasons set forth herein, disapproves of the new mandate for clear backpacks. He worked VERY HARD on this letter. Thank you for your consideration. #NeverAgainMSDpic.twitter.com/i2PrkXpSet

Dear Holden, Thank you for your well written letter. We will continue to reevaluate & make changes based on experience & feedback from you & other students, school staff, and input from our community. We love our students & teachers. Our #1 priority is the safety of our schools. https://t.co/bdNYC0uC2j

On Sunday night, Sarah Stricker, a freshman at the school, anticipated the reaction from one of her fellow students to the clear backpacks.

Peter Wang, 15, was one of the 17 people killed in the shooting at the school.