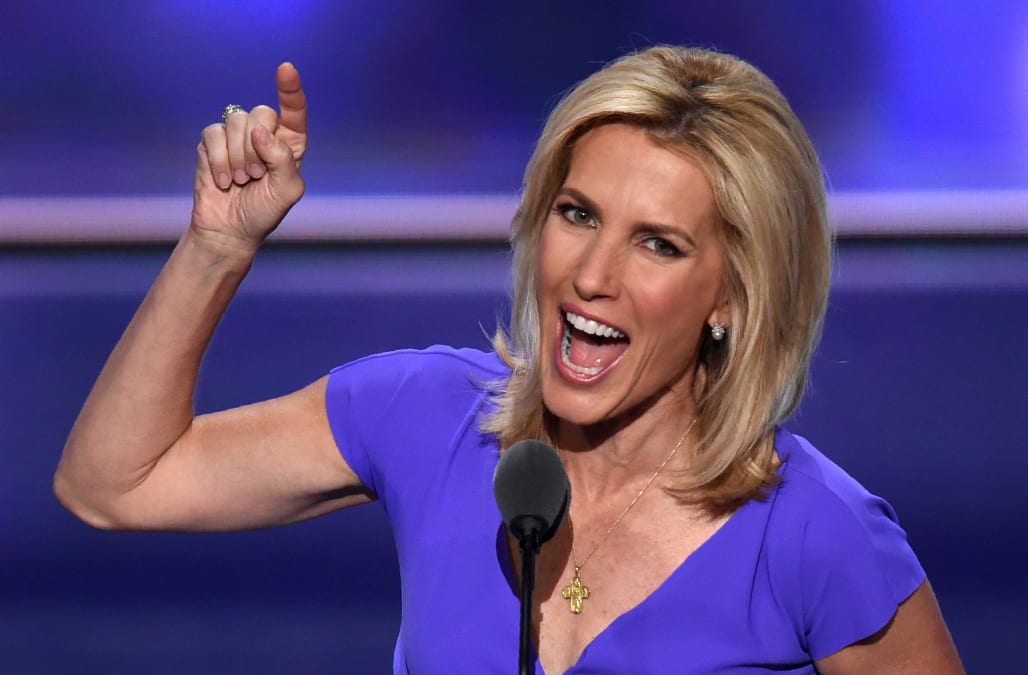 Laura Ingraham has built a career on controversy, with a history of public feuds and contentious comments dating back at least to her college years.

Her latest spat with Parkland shooting survivor David Hogg joins a long list of snide remarks and questionable commentary she's used to secure herself as a recurring fixture on Fox News.

The network in September announced she'd helm her own show, "The Ingraham Angle," a conservative talk show where she has sparked support and backlash from both sides of the political spectrum. The avid Trump supporter has also kept it candid as the editor-and-chief of LifeZette, her politics culture website, and her radio show "The Laura Ingraham Show."

Earlier this week, Ingraham mocked the Hogg for his lack of college acceptance letters, prompting the teen to call for a boycott of her advertisers. Several of them have since cut ties with the conservative host, marking some of the first tangible consequences she's faced for intentionally stirring the pot.

From her time as a student journalist to on-air digs at athletes and musicians, here's a look at some of Ingraham's most controversial moments:

The Fox News host in February scolded NBA star LeBron James for "talking politics" during a candid interview with ESPN.

"The No. 1 job in America, the appointed person is someone who doesn't understand the people," James said. He also called the President's comments and rhetoric "laughable and scary."

Ingraham dismissed the Cleveland Cavalier as "barely intelligible" and "ungrammatical," noting she'd be hard pressed to take political advice from "someone who gets paid $100 million a year to bounce a ball.

"Keep the political comments to yourself," she concluded. "Shut up and dribble."

The backlash was almost immediate, with celebrities and athletes accusing Ingraham of being a racist.

Ingraham sparked similar criticism following an interview with Vibe magazine editor in chief Dawton Thomas about the 2018 Grammy nominations. The award show, for the first time since 1999, had completely shut out white male artists from the album of the year category.

Ingraham expressed concern over the nature and tone of lyrics from songs off Jay-Z's new album, which nabbed several nomination in the 2018 award show. Thomas tried to explain the rappers freedom and "creative license," but Ingraham could not move past Jay-Z's history.

"Obviously Jay-Z, it's a well-known story but he was a kid, wasn't he a cocaine dealer, crack dealer, did he stab his manager or someone in the neck?" she asked.

Amid the late night talk show host's on-air feud with the GOP, Ingraham slammed Kimmel for using his son as a prop to push for government healthcare.

Kimmel had recently delivered an emotional plea to those politicians considering a repeal of the affordable care act after his son was born with a rare heart defect.

"Politics and comedy — yeah they do intersect every now and then, but when people tune in in general, at the end of the day, late night-shows, they want to laugh, they don't want to feel like they're under attack, they don't want feel like the guy they voted for, you just think is a horrible awful rotten person. It doesn't work."

While putting his child forward as a political prop was “very cute,” Ingraham urged him instead to “stick to the schtick.”

At the end of her remarks during the Republican Nation Convention, the political commentator and radio host appeared to give the Nazi salute before leaving the stage. She'd just finished criticizing then-presidential hopeful Hillary Clinton, skinny jeans and man buns when she turned and extended her arm in the air.

Her action sent social media into a tizzy, with everyone speculating on whether she’d been waving or performing the gesture made famous by the Nazi followers of Adolf Hitler.

Ingraham opted to ignore the frenzy and the following morning took to lambasting Ted Cruz for not supporting President Trump enough.

As the editor of her college newspaper, Dartmouth Review, Ingraham in 1984 ordered a reporter to secretly record a Gay-Straight Alliance meeting.

The clips, which featured members speaking about their sexual experiences and being gay on campus, were published alongside an article questioning the school's funding for the program.

The 54-year-old Connecticut native stood by the publication at the time: "The big thing is what does this organization do with its money? It seems like they just have parties and talk about parties. There isn't a heterosexual group that gets funding."